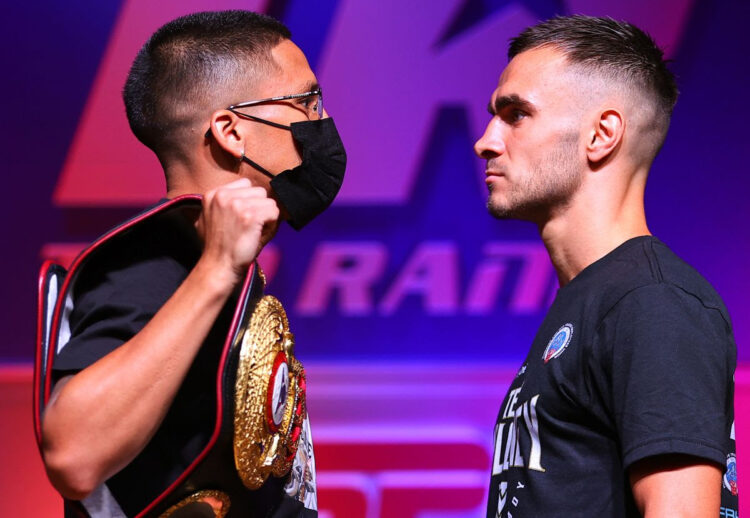 ESPN for the main card starting at 7 PM PST, ESPN+ will show the undercard prior, start time 3:30 PM PST.

Joshua Franco will fight in the second trilogy of his career, the first against Oscar Negrete, as he faces Andrew Moloney in a bout that will be contested on ESPN for his WBA super flyweight title.

“{The second fight} was only two rounds,” said Franco at Thursday’s press conference. “Two rounds don’t really show much. To me, the fight was going the same way as the first fight, but that’s why we’re making the third fight, to take care of business. I’m ready for that. “

The result of this fight will more than likely define the legacy of both fighters, as the first bout was a jarring loss for Andrew Moloney, who was signed by Top Rank Inc, as a fighter with the potential to have international stardom, and bridge boxing into Australia in the near future. Franco won a close decision in a fight he pushed Moloney back in from start to finish.

As American fight fans in some way when not tucking in our bias, we look at non-U.S. fighters and it seems we often wish to see failure to tell the internet why that fighter wasn’t any good. The truth is every fighter at this level is extremely good – and Moloney and Franco are justified rivals, who are fighting for not just the world title, but future opportunities.

“I think you can expect a great fight. I know Franco is going to be more determined this time around after the criticism he’s copped since that last fight and the whole world knowing that I should be the champ right now,” said Franco. “I’m coming even more determined with more to prove, and as I said, I’m doing this for my family and this is going to be a great night and I’m going to come out with that belt like I should’ve.”

The first fight for Moloney was odd. It was his first camp in America, and his first fight with Top Rank Inc. Moloney stayed in America, with his brother, while his family, stayed back home in Australia. To say adjustments were made to his life would be an understatement.

That being said, Joshua Franco won the belt, and then saw his second camp have various members of his team test positive for COVID-19 at different parts of his camp. In short, neither fighter has had an ideal camp, and both have looked like superstars in one fight a piece.

“It’s hard to put into words how much this means to me. I feel like my whole life I’ve dedicated to this sport. The last 18 years I’ve given this sport everything I’ve got and all the hard work and all the sacrifices I’ve made will all be worth it when I become a two-time champion on Saturday night,” said Moloney. “…this is for my family as well. We’ve locked ourselves in a house for training camp and have been very safe to make sure that nothing gets in the way of this fight happening, and it’s a pleasure to be back over here in America. I really feel like this is my second home now. I feel very comfortable here and look forward to putting on a great show for everyone on Saturday night.”

Not to be outdone, Franco shares a similar sentiment.

“It means everything to me. This fight means a lot and that’s why I prepared myself the very best in the gym,” said Franco. “Winning this fight and making the statement I want to make will open up bigger doors for me. There were no issues at camp. Camp went very well, very good, so I’m ready to go.”

Moloney recalled on my podcast that a moment from this fight stuck with him.

“After the fight, [Franco] said ‘easy work’, to me in the corner,” said Moloney who felt disrespected by this.

In the second bout, the hand speed and quickness was on full display as Franco looked to be in a bad way, but a clash of heads according to the judges, and a nearly 40-minute review of the outcome saw, Franco, keep the belt via a no-decision, as it was ruled Franco’s damage to his eye that didn’t allow him to continue occurred from a headbutt, not a punch.

“I know 100 percent deep down inside there was no headbutt,” said Moloney. “The whole world knows there was no head clash, and if you watch the replay, you’ll see at 1:36 left in round one, I land a jab that shuts his eye. I knew that on the night, and I’m even more sure of it now. “

“Expect a great fight, a great show, fireworks,” said the to-the-point world champion, Franco. “…expect for me to make a statement Saturday night.”

The third bout will happen in the most unlikely of places, Tusla, Oklahoma, as the two who have put forth two great fights already in one year’s time will look to put a capstone on this series with one last masterpiece. This is a fight you don’t want to miss.

South El Monte super lightweight Arnold Barboza Jr., will face former Devin Haney opponent, Antonio Moron, as Barboza Jr., should be getting to the point of getting a world title shot, soon. Barboza Jr. is a uber-talent who just needs a chance and is one of my favorite fighters that is going largely unnoticed by a lot of fans, and media. With a big performance and Josh Taylor maybe vacating all four 140 lbs world titles after his next fight, maybe Barboza Jr. can fight for one of the vacant titles in the future.

Jason Moloney, the brother of Andrew Moloney, will face Joshua Greer Jr., in a bantamweight bout, that will serve as a crossroads match. Jason Moloney was knocked out by “The Monster” Inoue on Halloween of last year, and Joshua Greer is coming off a loss to Mike Plania and a draw to Edwin Rodriguez. Both of these guys, who have been at the top of the card prior, need a win here.

A fight all hardcore boxing fans should watch is – Genesis Servania vs. Andres Cortes, in which Servania fought Oscar Valdez for a world title, even dropping the Mexican legend as well, and Andres Cortes, a former Mayweather Promotions fighter, is looking for a marquee win to get into the world title conversation. This is a sink-or-swim fight for both.

The grandson of Muhammad Ali, who trains with “Sugar” Hill, Nico Ali Walsh will make his pro debut, as well as the son of Tommy Morrison, Trey Lippe Morrison will be in heavyweight action.

2016 U.S. Olympian Karlos Balderas will make his Top Rank debut, this will be his first bout since his lone loss nearly two years ago.

Albert Bell will face San Jose, California’s Julio Cortez, who is from Ecuador and had a deep amateur career and Abraham Nova will be back in action as well.