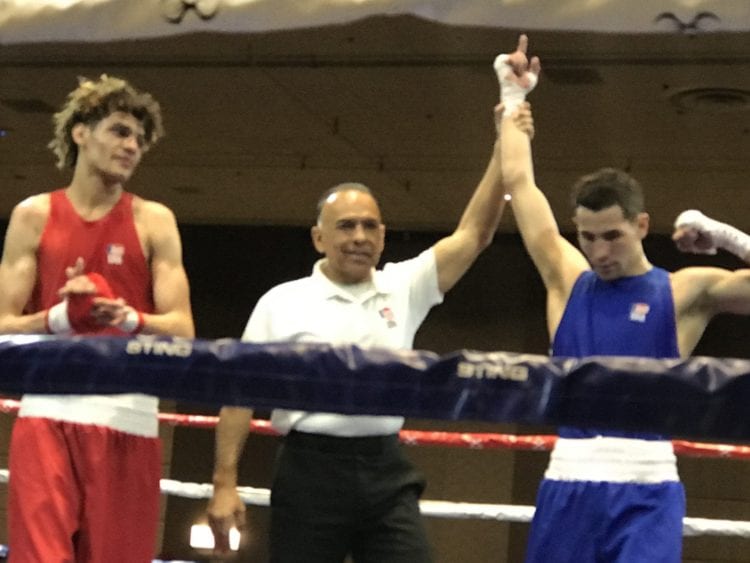 One of the best amateurs from the Bay Area since Andre Ward is Charlie Sheehy – the 2020 U.S. Olympian, who was unable to compete at the Tokyo 2020 Olympic Games that saw Keyshawn Davis instead compete at the lightweight division in his place based on world rankings which became the qualifying standards due to COVID-19, as the lightweight Sheehy will turn pro, Saturday, October 16th, at the Chachanski Park in downtown Fresno, California. Tickets are available here.

“I’ve been dreaming about this day since I first started boxing,” said Sheehy in a media interview on Wednesday minutes after entering the fighter hotel. “I’ve dreamed of being on undercards like this, just on a huge card – like a Mikey Garcia fight, so I am excited to get my dream started.”

Sheehy holds wins over Ryan Garica, Vergil Ortiz, and Josue Vargas, all three of whom look the part to be future world champions, which sets the stage for the excitement around the young fighter.

Sheehy is also working with a lot of industry leaders including the prestigious SNAC System supplement brand in San Carlos, California, headed by sports-scientist legend, Victor Conte, as well as managed by boxing power broker, Peter Kahn. The buzz and excitement around Sheehy is enormous. Not just for his talent as Sheehy fights like a young Erislandy Lara, but favors the body a bit more than Lara, but also for the person he is.

Most interesting about Sheehy is the fact that he wants to represent the working-class Americans, the steelworkers, construction workers, contractors, welders, etc. Sheehy grew up in a gym full of blue-collar professionals who had two mottos in the gym, 1) work hard, and 2) give back. The second – give back is why Fire In The Ring Boxing Gym has been so beloved as it offers free boxing to anyone under the age of 18-years-old to keep them off the streets.

“I want to put a spotlight on the people who have helped me get to this point as well as the people who are similar to the people who have helped me, I feel that a lot of people in America don’t have a voice, and I want to fight for working-class Americans since I see myself as a working-class fighter,” said Sheehy in between a private training session with assistant coach and Bay Area boxing royalty Bruno Escalante. “Growing up my gym was free, not-for-profit, so when I am not training I do my best to help out with all the kids at the gym, and make sure they get the same treatment as I got coming up.”

Sheehy is part of a new youth movement of Northern California splitting his time between three gyms, Jimmy Ford’s Fire In The Ring Boxing Gym, Aloha Time Boxing Studio which is run by Bruno Escalante and Mike Bazzel, as well as training out in Florida at Javiel Centeno’s Sweatbox Gym.

Sheehy went to boxing college which is the developmental system of boxing in national tournaments as an amateur, and got his master’s degree by going into multiple Team USA boxing camps, now it is time for him to graduate. As any smart person knows, all boxing guarantees is frustration and heartache, but that being said, at least it guarantees something. I could write about how Sheehy will be the best fighter, and all that, because I know him, and like him, but with any prospects, you honestly never know. Boxing is a cruel and unpredictable sport, but also so amazing at the same time – it is why we love it, and Sheehy has as good of chance as any to make it, especially from Northern California.

Sheehy has the chance to be great, and his opponent selection shows that in facing a member of Nick Diaz’s Academy in Stockton, California, Luciano Ramos, who is 0-1 as a pro, but a deeper inspection of his record shows he lost by one round and dropped his opponent in his lone pro boxing bout. For those unaware, Diaz is a legendary mixed martial arts fighter, most popular for a “Stone Cold” Steve Austin-like persona in MMA/UFC in which he doesn’t cater to his bosses, and essentially marches to his own drum, and has become a cult-like figure how Kurt Cobain did in the early ’90s. In short, Sheehy is facing a guy coming to win in his first bout, most people don’t do that – and that speaks to the level of belief in Sheehy’s skillset.

“I am looking to stay as active as possible,” said Sheehy in regards to his pro career. “If I could fight every month, I will. I got a good team behind me, and I am ready to fight.”

Sheehy fights this Saturday, October on the undercard of Mikey Garcia versus Sandor Martin taking place at Chukchansi Park located 1800 Tulare St in downtown Fresno, California. Sheehy will more than likely be one of the first bouts so supporters of Sheehy are encouraged to get to the venue between 12-1 PM PST to make sure they can see him in action