Butaev Too Much For James

I hadn’t seen Radzhab Butaev prior, I had seen his name as someone who gave Alexander Besputin a tough fight in Russia, but couldn’t put a style to the name. Well, against Jamal James, it was walk-down city, as even though the Showtime crew had the fight close, I saw it as a slow beatdown being put forth by Butaev as James’ best attribute of his heart, guts and will, were not an enough to sway the fight.

The stoppage might have been a bit soon, but that being said Butaev would have been the winner regardless of that, in my mind, as he was just starting to impose himself too much on James.

Butaev will now await the winner of Yordenis Ugas and Eimantas Stanionis, as the WBA all their world titles, and the winner of that bout will face Butaev to become the WBA welterweight world champ. For Ugas, the WBA tournament is less than ideal as he just beat Manny Pacquiao, and will then go into two fights fighters a lot of fight fans don’t know.

Jaron “Boots” Ennis is a star. He knocked out tough spoiler Thomas Dulorme in one round. Even if you want to say Dulorme is past his prime, most, if not any other fighter couldn’t merit that result. Ennis is special, and the biggest thing is, he is looking an unstoppable force – so I am hoping we get to see Ennis in with the best in the world, sooner rather than later, as he is getting to a point in which you can’t really ramp up his competition much more before getting to the top of the division.

Michel Rivera picked up a solid, but rather uneventful win over Matias Romero. Rivera is a world-level fighter, who is not putting forth the performance to merit a big fight in the near future. I think we a few fights and development, Rivera will grow into a solid fighter, it just comes down to who he fights in the near future.

Darwin Price had some ring redemption stopping Jean Carlos Torres, better known in the gym as “Lobo”. Price, a decorated amateur, who only lost one fight to Malik Hawkins based on an injury, but bounced back quite nicely. Price is someone who I want to see in a big fight sometime soon.

David Lopez of Oakland, California, better known as “The Young Destroyer”, or “The Young Steph Curry Entering The League”, got a first-round KO, living up to his billing of being a young fighter signed with Mayweather Promotions. Lopez has the chance to be a very special fighter, and could be the next marquee star for that company after Gervonta “Tank” Davis.

Josue Vargas was very loud during fight week, very disrespectful at the face-offs, and then got caught early and stopped in the first round by Jose Zepeda, which is a result that might have lasting impacts on his career. Vargas was fighting at home in New York, but was stunned when a left hand sent him down face first, similar to how Willie Shaw hurt him in his last fight. Vargas never recovered and was stopped seconds later.

It feels like another story of too much, too soon for Vargas, who looking to jump the line, and fighting one of the best fighters in the division. The gamble didn’t pay off. Zepeda deserves a world title shot as well.

The evening didn’t play out well for the a-sides as Caraballo was dropped four times en route to losing to former world champion Jonas Sulton. Sulton now has yet another marquee win as he also holds a win over John Riel Casimero as well. With this win, it seems all, but assumed he will fight “The Monster” Naoya Inoue sometime soon.

Welterweight Jahi Tucker continues to look like a million bucks as he got a second round knockout and was scheduled for an six-round bout. Tucker is a fighter I beleive will emerge next year as a young fighter looking to be a prospect of the year-type contender.

Kasir “Mazzi” Goldston fought a dirty fighter, who came to make him look bad. The bout gave Goldston good experience, but was rough to watch. Sometimes learning isn’t fun as a viewer, and probably not even as a fighter. This is one of those growth and development fights that are needed, but are on the undercard for a reason.

Chantelle Cameron is mean, and because of that she brings something women’s boxing hasn’t seen in sometime. Cameron reminds of a Roberto Duran in her mindset, as she is just mean. Mary McGee was game, tough and strong, but Cameron is a brute with skills as well. What she is doing is not being regarded by the masses as it should be, but Cameron is technical, strong, and willing to fight the best. With the win, she hold the WBC and IBF 140 lbs world titles, and within the year she will probably hold all four of them.

A bout with her and Katie Taylor has to happen.

Jorge David Castaneda defeated Youssef Khoumari. Castaneda holds a win over Otha Jones III as well. Castaneda is becoming a battle-tested one loss veteran, who declared after the fight he wants to fight for a world title next year. Castaneda reminds of a male verision of Jessica McCaskill.

The only other notable bout was Alen Babic getting a second-round KO of Eric Molina. Molina looked disinterested fight week and put up little to nothing. I didn’t get much from this fight.

Jean Carlos Abreu got off the deck to knockout one of the better amateurs from the international scene in some time in Tursynbay Kulakhmet, who is advised by MTK Global. Abreu went down in the fourth then dropped Kulakhmet twice in the seventh, with the second seeing the ref waive the bout off.

Jose Uzcategui was caught using EPO and will no longer get a main event fight against David Benavidez, and now will take on Kyrone “Shut It Down” Davis.

Shields Loses For First Time As A Pro

Yikes. One of the greatest women’s boxers, if not the greatest, Claressa Shields, took a humbling defeat at the hands of Abigail Montes in Montes’ U.S. debut. Shields faired well in the beginning, but her inexperience in regards to the ground game cost her.

Shields rose to her feet at the end of the final round, and showed frustration. For Montes, this is a historic moment for her, as at the very least she will always be the answer to a trivia question.

Kayla Harrison continues her ascent to stardom, as she won yet another PFL tournament. The next question is where does Harrison go next – the UFC or pro wrestling with AEW? Either way, Harrison will be a star.

The co-main saw Petr Yan outpoint Corey Sandhagen to win the interim UFC bantamweight title. The current champ is Aljamain Sterling, who won the title from Yan via a DQ. The rematch should be very exciting. 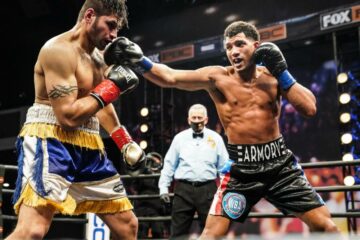 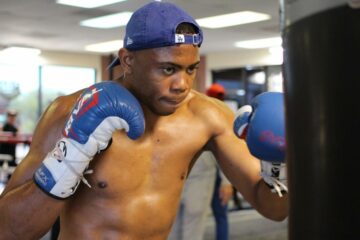 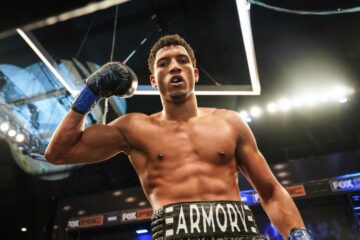