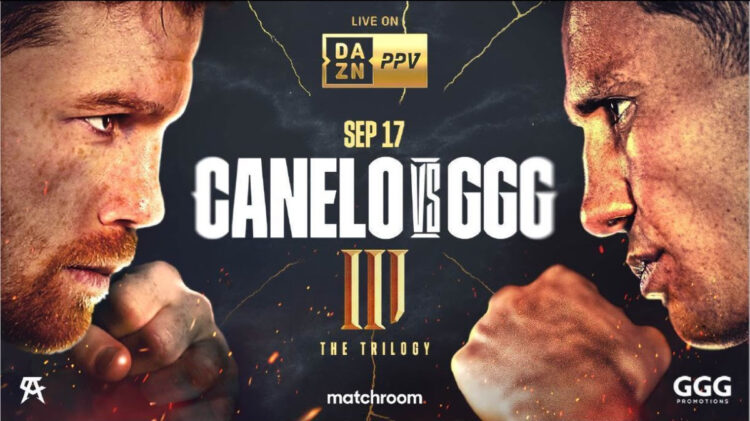 The fight that one could say DAZN was built on now has a fight date.

PPV star Saul ‘Canelo’ Alvarez and Gennadiy ‘GGG’ Golovkin will conclude their trilogy started four years ago, on September 17, on DAZN Pay Per View in the U.S. and Canada and around the world on DAZN (excluding Mexico, Latin America, and Kazakhstan) and is presented by Matchroom, Canelo Promotions, and GGG Promotions.

After Canelo looked undersized against Dmitry Bivol, and lost a fairly one-sided decision, it isn’t a surprise to see the Golovkin trilogy occur as time is fleeting on the bout. Add to it, that DAZN basically started their content company around the idea of having Canelo versus Golovkin and massive Anthony Joshua fights on their platform. At the time, they thought they could sustain with a subscription fee service, but now have moved to a PPV model for the fights everyone wants to see, which is essentially Canelo, and possibly Joshua when he returns, as he has fought since DAZN has moved to pay-per-view. Similar to how Premier Boxing Champions started out with “#FreeBoxingForAll”, but now has put on three pay-per-views in 2022 alone.

Golovkin is 40-years-old, and since a close fight to Sergiy Derevyanchenko, has become a rather inactive fighter, only fighting seemingly when he needed to, fulfilling contract obligations and getting paid, but it seems the only thing that could bring his passion back was Canelo. Golovkin connect to the L.A. market seemingly not what it once was, his iconic trainer Abel Sanchez no longer in the picture, and now Golovkin is brooding silent, serious fighter.

Richard Caro once said about Lyndon B. Johnson, a quote to the extent that was power reveals truth. Well, what we learned about Golovkin was, once he got money, distribution, and two bad decision against Canelo, he was essentially no longer going to cater to professional boxing at all. Golovkin has gone inward, not unlike J.D. Salinger after writing “The Catcher and The Rye”.

Canelo, on the other hand, became undisputed at 168 lbs., and looked to be nearing the status of an all-time great, but lost badly to Dmitry Bivol. A loss that now makes Canelo look mortal, and more so, look as though maybe the money has gotten to him, as his gameplan appeared to be load up on power punches, and eventually Bivol would fall. It didn’t, and now both fighters are at crossroads.

The bout doesn’t have a venue yet, but is made at the perfect time for boxing, as it is happening at completely the wrong time. These type of fights, or conclusions to boxing match-ups only happen, when the guy with leverage losses a bit of luster, and that is what we’re seeing, as a year after being the ITRBoxing.com’s Figther of the Year in 2021, Canelo has a lot to prove, as someone will question why he isn’t going after Bivol right away. If Canelo, DAZN and Golovkin want to make this fight, September 17th was the last realistic date to make it on, otherwise it probably never would’ve happened.

Golovkin, who has looked old in his last few fights will be as motivated as ever, and probably as focused as we have seen him since the second Canelo fight, and is darkhorse pick to win this bout. As I have scored the previous two bouts for Golovkin, neither of which went to Golovkin.

The big question is, how will the fight be received as Golovkin has been out of sight, out of mind for four years essentially, and Canelo just lost to a fighter not a ton of casual fight fans knew of, and still might not know of. Will this be a dynamic atmosphere or a party for those who stuck with boxing for the last decade to come out, and socialize about the past, more so than the present? The fight feels every bit a Rolling Stones reunion tour, as it does two fighters vying for the top spot in the sport.

“I feel very happy and proud to be able to give the best fights and this fight won’t be an exception,” said Canelo.

On the other side, Golovkin with a slight jab, at Canelo it seems.

“I hope to see you on September 17,” said Golovkin.

The big question is – is this fight what it once was?

Let’s look at the landscape of the world right now, especially the U.S.

Gas is about $60-80 to fill up a tank, groceries are $50 more for me, and nothing is going down. Add to it major media outlets like The Finnicial Times, are already looking at a second recession in 14-years. By September, we could be looking at $7-8 gas for a gallon, and $340 grocery bills.

Boxing has put on to the best of my knowledge, five pay-per-views this year, counting the “Tank” Davis vs Rolando Romero, with only one of them not costing $ 74.99. It is clear the promoters are feeling the economic burden as our fandom is being asked to fork the bill, even on fights that don’t seem as though they’re marquee pay-per-view bouts. Currently, certain fighters are being deemed PPV and to see them you have to pay.

At a certain point, we’re nearing a boiling point. A point where people get frustrated. Gas gets too high, cost of living is too expensive, and luxuries are not a necessities. As someone who loves boxing, I fear that with the sixth on paper, pay-per-view, at what point do, we just start to be viewed as a sport that is too expensive for many to follow, as the NFL, MLB, NBA, and other sports, don’t charge to see the best compete outside of a television plan, and the UFC is making better fights more consistently.

You can only ask boxing fans to spend so much, before they realize they can go a week without watching the fight. I am curious to see if people, four years later want to see this fight, or if people realize that they don’t have to tune into each PPV, and this is a turning point for some boxing fans in their 30’s heading into their 40’s realizing you can have other interests.

I truly believe this fight will mark the end of boxing fandom for a certain generation of fight fans, who will stop-in and out of the sport, and I am curious to see the crowd and anticipation behind this bout.