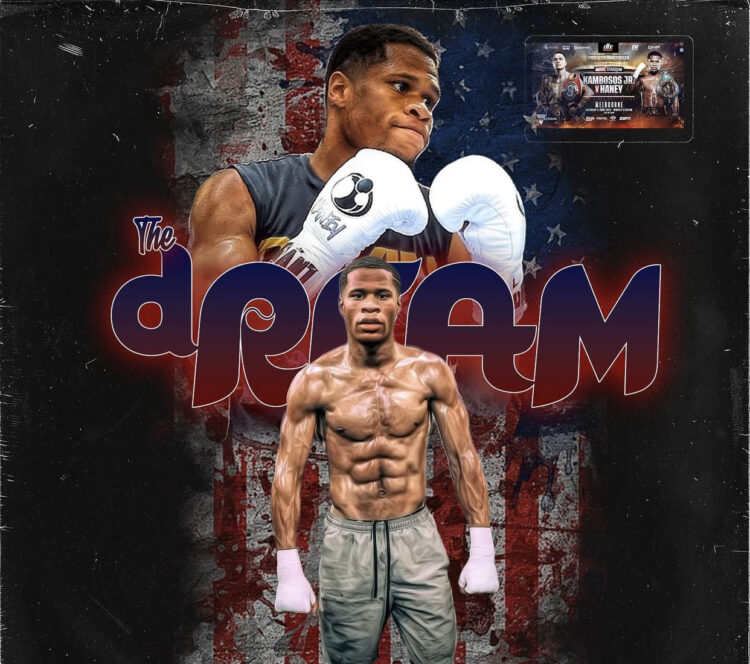 Though it might not be a fight many rewatch, it was a masterpiece in its own right, as Haney went to Australia, and outboxed a brash champion in Kambosos Jnr., in such a way that no one doubted the outcome.

In a prototypical way, the hype outweighed the fight, which is the biggest compliment you can give to Haney, as he used his skills to beat Kambosos Jnr., who is a guy, who fights with passion and aggression. In the crowning achievement of Haney’s career so far, Haney went to Australia, gave up all the demands in order for a chance to win all four of the world titles, and put on a clinic. Haney is a refreshing throwback fighter, looking at legacy as much as the fame.

Haney is a special fighter, one who will now have his name in the history books, and has a chance at being one of the greatest fighters of his era. This felt like his introduction to the world, as up until this point, Devin has been avoided, and off-television for the most part. The partnership with ESPN also seeming provided more exposure to Haney as well.

The only drag. The pacing of the American telecast. We got three fights over the course of three hours, with the two undercard bouts lasting all of four rounds. In short, we got a lot of talking heads segments, and camera work showing how big the arena is. It was about as rough of a telecast as I have ever seen.

I am excited to see what the future holds for Devin Haney, as this was a star-making performance.

Haney is trending towards being an all-time great, and now as fans, you can’t help, but cheer for Haney as he is actively looking for the biggest fights and challenges of his era.

The pace of the undercard was awful for U.S. telecast, let’s just say that. Jason Moloney stopped Aston Palicte in the third round in what might be the highlight of Moloney’s career. The fighter nicknamed, “Mayhem” began to land a great right hand, and seconds later the fight was over.

Andrew Moloney got a second-round knockout on the undercard as well, as both brothers got highlight-reel KOs.

The television opener saw 43-year-old Lucas Browne get a first-round KO over Junior Fa. Fa is now on a two-fight losing streak as he previously lost his unbeaten record to Joseph Parker, now a brutal first-round KO loss to Browne, seemingly has his career going in the wrong direction. Browne will get a big fight against a top heavyweight looking for an activity fight.

The Bay Area’s Amari Jones got a knockout win after the main event as well. Jones is a stud, and should be a major factor in the 154 lbs division in two-to-three years time.

Yoel Angeloni had a successful pro debut getting a four-decision, as he had Kris “Lightning” Lopez in his corner, as it was nice to see some of the Oakland friends I have represented on the biggest stage.

Stephen Fulton defended his two world titles against Daniel Roman on Showtime, but for a fight that had high hopes, as a potential fight of the year fell somewhat flat. Fulton seemed to have the advantages in the fight, and Roman tried, but couldn’t close the gap, and yet Fulton didn’t take chances.

It is clear Fulton is one of the best guys at 122 lbs, in fact, I think he is the best one, but his last fight a really close one against Brandon Figueroa has excluded him from my pound-for-pound list as Fulton, at least for me the viewer, has some questions that need to be answered after getting all the belts, against Figueroa, as that belt felt more like a draw than a Fulton win. With a slow, ESPN telecast, it was all eyes on Fulton, and the fight was not unlike what Haney did to Kambosos Jnr., but with a quarter of the media attention, as in a few years, I believe we will probably forget this fight happened.

In the end, we got a tactical win, a good win, but one we might forget in a couple of years. This was a resume padder for Fulton, but not one we will look back upon to define his career or Daniel Roman.

Fulton won a one-sided decision, that is all.

David Morrell stopped Kalvin Henderson in a fight that looked to be all, but decided after the opening bell. Morrell is an aggressive come-forward fighter, who in only six fights, holds some form of a title, and is a ten-round fighter. Morrell is calling out David Benavidez, Caleb Plant, and all the top guys. I am curious to see what is next for him

DJ Zamora got a stoppage win, and Travon Marshall got a win as well.

On what proved to be a rather sleepy card, we have a new IBF 130 lbs champion in Joe Cordina, who stopped the previous champion, Kenichi Ogawa, in two rounds. In what was perceived as a 50-50-type match-up, Cordina exploited an overly aggressive Ogawa to record a knockout that could end up being the knockout of the year.

What an introduction to the world level for Joe Cordina.

Also, it was a great way to end a fairly boring boxing card on Saturday afternoon in America on DAZN. As it was a great lead-in to the more exciting bouts later.

130 lber Zelfa Barrett got a professional 12-round decision over Faroukh Kourbanov for a European title. Barrett outboxed Kourbanov, but put forth a performance that got him to the next level and showed his skill, but didn’t get me heavily invested in his career as of, yet. In short, Barrett looks like a skilled fighter, who I am not sure is a guy who can beat the best in the world, and I am not yet sure how his skills translate to the best in the division.

Barrett could very well be next for Cordina.

Skye Nicolson is continuing to stay active, and continues to remind me of Demetrius Andrade, as her feet dictate the action in the ring. That being said, rumbles on the internet are expressing frustration in this is yet another fight she has had without a KO, or a lot of action-packed exchanges. Personally, I think Nicolson is good for the sport, and will be fighting for a world title by December. She is a winner, not always an entertainer.

Gamal Yafai stopped his opponent in four rounds as well, and Ester Konecna, women’s super middleweight won her second bout in her nineteen pro bouts, as she defeated Monique Bux, who was making her pro debut.

154 lbs 2016 U.S. Olympian Charles Conwell got a 3rd round KO in Canada after a nine-month layoff. After the fight, he stated he wants only world champions or former world champions moving forward to match his contender status

Alexander Volkov got a hotly debated first-round technical stoppage over Jairzinho Rozenstruik, in a fight that was shaping up to be a ton of fun. Volkov was rocked, then rocked Rozenstruik, and the fight was stopped. Wouldn’t be mad to see it again. Just saying.

Seemingly unknown at-least to me, Movsar Evloev defeated Don Ige, a fighter, who is best known to me as for working in the MMA management business while having a pro career. Evloev outclassed Ige.

Karolina Kowalkiewicz won for the first time in four years by forcing Felice Herrig to tap-out in the second round. Both fighters were emotional after the fight, with Herrig saying it was the last fight of her career.

Lukie's Lightweight Rankings, and Why Devin Haney Is #1