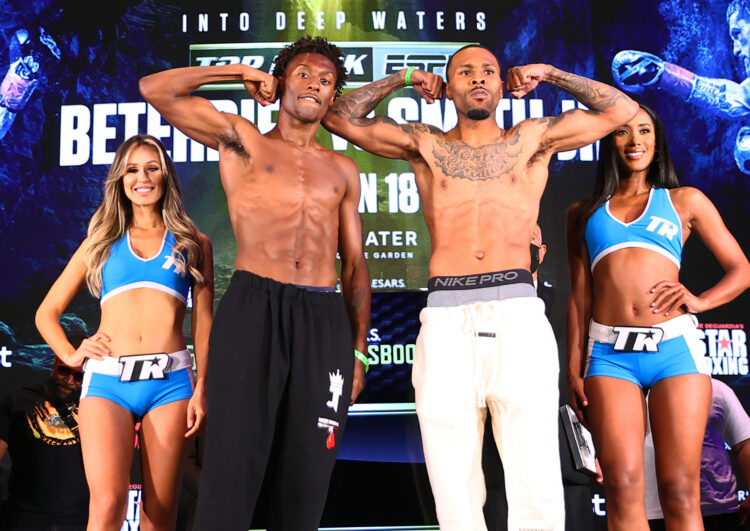 NEW YORK, NEW YORK - JUNE 17: Jahi Tucker (L) and D'Andre Smith (R) pose during the weigh in ahead of their welterweight fight, at The Hulu Theater at Madison Square Garden on June 17, 2022 in New York City. (Photo by Mikey Williams/Top Rank Inc via Getty Images)

Welterweight Jahi Tucker, an undefeated prospect who fights this Saturday at the Hulu Theater at Madison Square Garden in New York City, New York, is emerging as one of Top Rank Inc.’s breakout stars of the future, or at least we think so.

Why? Beyond, a slew of knockout wins, four knockouts in his seven pro fights, all of which Tucker has won, it is the fact that he keeps going viral on Top Rank Inc’s social media. When he knocked out Eric Rodriguez, and said “…hello” to the Top Rank social media team after the KO, it was a moment that you don’t see often from young fighters. The tweet got over a million views, and the knockout on YouTube is nearing 500,000 not bad for a fighter who is not a household name.

When looking at stars, Tucker reminds me a lot of things I saw in a young Teofimo Lopez, but not in the same way skillset for skillset wise. What I see, is a young charismatic fighter, who is willing to put himself out there, and standout, even if at times it might be awkward or even child-ish to a degree. His personality is already outgoing, but could evolve into that of someone worthy of spectacle and not just athletic achievement. Tucker has power, embraces social media, and is part of the youth movement of Top Rank Inc. as by the end of 2023, Tucker should be nearing the co-main event slot on major cards in New York, with the key x-factor being, if he keeps winning.

Add to this a moniker “GOTE”. Something that reads like a poor spelling of Gotti, but actually means greatest of this era, and you have someone who is not shy at letting you know where he feels he belongs in the sport. Not unlike Klay Thompson shooting threes until he catches fire, Tucker a puncher, who believes in his gifts the same way the historic Golden State Warriors two-guard believes in his jumper.

As the old adage goes, ‘winning fixes everything’, and that is very vital for Tucker, at this stage in his career, as he looks to be a center-piece of the New York City movement with his promoter, Top Rank along with Edgar Berlanga, Xander Zayas and Bruce Carrington who are being featured heavily in the New York City market in the past year. Tucker is beginning his ascension to the top of the division, and beyond that – each fight he is in, is enjoyable. That isn’t all that common for fighters who are featured on the undercard in developmental bouts.

Tucker explains his drive in philosophical way, “the dark place”. The first time I talked to him, Tucker explained that his team takes him to “dark places” physically and mentally in the gym. These dark places are what Niccolo Machivelli might refer to as virtù which would dictate fortune, as Tucker feels that both physically and mental he has been to places his opponents can’t take him. Machivelli felt that often, fortune showed preference to some princes, though in this case we will say fighters, and that a harder path could be dealt on purpose, for whatever reason. Tucker’s team is giving him, a ha

Tucker’s opponent, D’Andre Smith, has a promoter, Pulse Boxing, run by Vick Green, a guy from Ohio, who is building a roster of fighters with the most notable being Albert Bell, a world-title caliber 130 lbs fighter who being largely avoided, as Smith is a one-loss pro fighter, that is a formidable test for Tucker’s trajectory as a pro. Smith is a solid regional fighter looking to prove he is a national level fighter, whereas Tucker is trying to graduate into eight round bout by the end of the year, and more marquee spots on the card for the near future. Realistically, if everything were to fall in place, Tucker could be in the world title picture at a mere 21-years-old, unreasonable to pencil in now, but if he keeps progressing it could happen, and that is something to be excited about.

Tucker is only 19-years-old, managed by James Prince, as well as promoted by Top Rank Inc, and has be called by his team “The Lebron James of Boxing”. In his pro debut, Tucker even wore the Vincent-St.Mary’s High School jersey dawning Lebron James’ name, an ode to James’ high school he played at, as he historically went from high school straight into the NBA in 2003.

It is too early to proclaim Tucker anything, but a prospect, but he is doing everything you ask of him so far. Tucker has a professional team, is taking hard fights, and fighting often. Now it just comes down to when he gets to the next level how does he translate, but Saturday night’s bout on ESPN+, live from the Hulu Theater, should give us a preview of things to come.