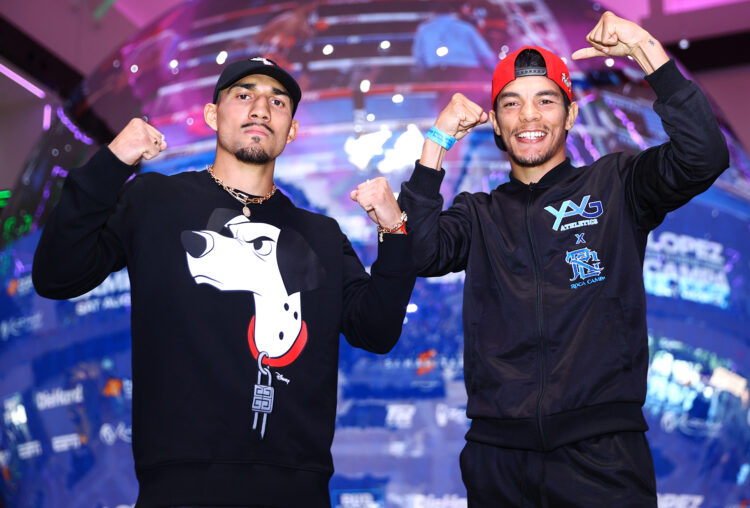 It was 2016, November to be exact, and Teofimo Lopez turned pro against Ishwar Siqueiros on the undercard of Manny Pacquiao vs. Jessie Vargas. The fight was wild and set the tone for Lopez’s career thus far. At the time, Junior Lopez, the father, and trainer of Teofimo Lopez had a moniker “Against All Odds”, and this fight in many ways was a perfect start to his career, as Lopez has always felt that boxing injustices have not gone his way. The moniker was created for Karlos Balderas qualifying for the Olympics before the Olympic Trials, and in his pro debut, after dropping his opponent twice, Lopez was ruled as being knocked down. A round later the fight was called off, but not before a knockdown from Lopez was called a slip and Lopez would start his career with a memorable KO.

With very few of the PPV card fighters hitting the stage at the post-fight press conference, Lopez along with his father wearing matching dress clothes, took the stage as Top Rank CEO, Bob Arum, joked with Teofimo Lopez. It was on this occasion that I first met Lopez and interview him, and his father.

I had no clue how good he’d become, but I could tell he was an entertainer, and beyond that just a genuinely kind person. I think the big issue is the cold nature of the boxing business, and somewhat the purity of Teofimo Lopez has hardened him as he gets older because he came into the sport with pure intentions of greatness.

The plight of Lopez saw him develop like most undercard fighters. Fighting often in Florida, Lopez got his record built up by Brad Goodman of Top Rank Inc., as he looked to step up. His first step-up bout, a guy who took Felix Verdejo ten rounds, and Verdejo at the time were being looked at like how people look at Xander Zayas now. The future of the sport for Puerto Rican fight fans.

The fight was ugly. Lopez won by knockout, and despite winning the WBC Continental Americas lightweight title. The issue was with all the brash talk from Junior Lopez and Teofimo Lopez himself, his story was unwritten, but his attitude was heavily criticized. Leading into the Mason Menard fight it was a make-or-break moment, and that is when Lopez became a star.

Facing a fighter, who had lost to Ray Beltran on HBO, and Devin Haney prior, Lopez knocked out Menard in one round on national television. Despite some adversities in undercard fights, Lopez stepped when he needed to as it was a birth of a star in front of everyone. Lopez that fight week had stated that it was “The Takeover”, in which he proclaimed he was there to take over, not unlike the Jay-Z rap song. Lomachenko the headliner looked angered by the blatant disrespect to his headlining spot on the card as he looked over at Lopez from across the table looking him eye-to-eye.

It was at that moment, that week, that Lopez’s attention shifted from angst towards Karlos Balderas in the amateurs to Vasyl Lomachenko widely considered the best lightweight in the world. Even more so, knocking out someone, a very talented Devin Haney took to a decision in simply one round was an emphatic response. Not just did Lopez talk the talk, he backed it up.

Lopez’s fame grew because not unlike Conor McGregor, Lopez was able to fight as well as entertain, and people believed everything he said.

Lopez would stay busy on the Terence Crawford vs. Amir Khan PPV card, and yes for those who already forgot that was on PPV. It was around this time, I believe after it, that Lopez got married. A lot had happened at once. The child-like innocence of Teofimo Lopez, who I met on one Friday night at the Top Rank Gym with Taylor Johnson shooting photos, that guy didn’t exist anymore. Now Lopez had responsibilities to networks, to his families, both his mother and father, and his wife, as well as from the outside looking in was being pulled every which way, at a very young age. Everything Lopez worked for, he was getting, but it wasn’t all that he bargained for as we have seen multiple times the turmoils of life adding up on Lopez prior to fight week.

Lopez would fight Masayoshi Nakatani in a fight that left people wondering what happened. Lopez won the fight, but it was close, and a lot of ringside observers didn’t see the same Lopez from some of his dynamic performances. To be fair, Nakatani is a very dangerous opponent, but still, it was jarring as Lopez was being looked at as a fighter to carry Top Rank Inc., and boxing on ESPN for the next decade, and had a fight that was very competitive prior to his first world title fight.

Yet, Lopez would silence any doubters by knocking out Richard Commey in two rounds. Lopez was now a world champion, and set to face Vasyl Lomachenko at some point in the future in a mega-fight.

I talked to him during this era, right as the pandemic hit.

This was a time of uncertainty. Lopez established his own life, moved away from Las Vegas, and established himself in the northeast, mainly New Jersey. The pandemic of 2020, caused a lot of sadness for a lot of people, but furthermore, it also created a strain on relationships, as we questioned what safety was like, and how to be the best versions of ourselves to help others.

Lopez would be the marquee bout of 2020, fighting Vasyl Lomachenko in “the bubble” on ESPN, in a fight that would change his life. Lopez put forth the fight of his life – and went from being a star to a superstar overnight as he defeated Vasyl Lomachenko, overcoming the odds on the bookies’ sheets. Lopez appeared too big and strong for Lomachenko, who had moments of success but could not put together enough rounds to win the fight. The fight elevated Lopez to the talk of the network, as now, Lopez was one of the marquee fighters in the world – a young fighter, who called his shot and delivered.

In a sport in which everyone overpromises and underdelivers, this was something.

Then it happened. Just like how 2020 would change Teofimo Lopez’s life, and make him a star, 2021 would be a nightmare.

Lopez would be at odds with his promoter, Top Rank Inc., taking shots at executive Todd duBoef, after Triller, an upstart app-based streaming platform that promoted Mike Tyson vs Roy Jones Jr., won the rights to his fight against George Kambosos Jnr. The fight would get delayed due to COVID-19, as Lopez would contract it fight week, as fighters had flown to Florida for the bout only to be sent home. Then Triller would see more and more delays until Triller lost the rights to the fight, and Eddie Hearn’s Matchroom Boxing, who bid second in terms of money for the fight, got to promote it.

Lopez would famously lose this bout, and the first-round of this fight made George Kambosos Jnr., a modern legend, as he dropped Lopez who looked as though he felt as though Kambosos Jnr would get stopped in the first two rounds. The fight was close, and a great bout for both, but in the end, Lopez would lose, and with the lose, so went a lot of political capital. B

The hedge they made on a political landscape was that by having all four belts, they would set the terms and rules of the wars that they would fight. When they no longer had the belts, they had no leverage, and some people in high places frustrated with them. Recently, Devin Haney would defeat Geroge Kambosos Jnr., and that seemingly is setting up a 2023 clash between Haney vs. Lomachenko with Shakur Stevenson lurking in the shadows of the lightweight division already.

Just as fast as Lopez’s star rose to the top, it dimmed a bit after that fateful night last fall. Add to the mix, his health was bad to Kambosos Jnr fight, his finances were a mess, and not long after Lopez would be divorced from his then-wife, whom he had a child with. If 2020 was a year in which everything went right, God taught him a viable lesson in humility in 2021, as seemingly nothing went right for him in that year.

Lopez is back, this Saturday, August 13th, in Las Vegas, Nevada, at the Resorts World Casino, and fighting at the Casino’s events center, against a relatively unheralded opponent in Pedro Campa. Campa is a solid fighter, but a guy on paper who plays to Lopez’s strengths, a tad slower, and willing to exchange, as Lopez is one of the better counterpunchers when his opponent starts the offense. The major issue in my opinion with the Kambosos Jnr fight was that Lopez tried to dictate the action rather than react which is his strength.

Lopez will dawn a robe that says “The Resurrection”, a biblical reference I am sure meant to signal the second coming of his career. Lopez looked to be the future of Top Rank, but now with so much turmoil in his life, largely brought on by his own success, Lopez looks to rekindle the magic of what made him once of the most outstanding young fighter in the sport.

It wasn’t that long ago, but it was long enough ago, that we have to watch to make sure the guy we fell in love with the one with all those knockouts, the one I saw in the gym, to make he exists. This Saturday, in Las Vegas, we find out, though I am pretty confident he is still there, especially when Lopez is this focused on a fight. 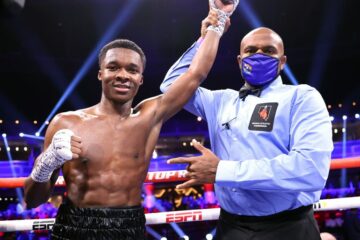