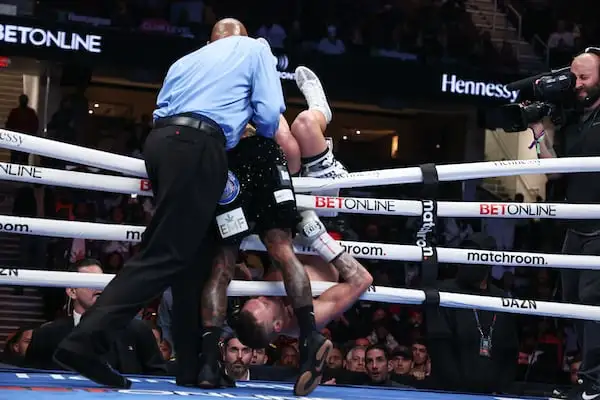 Stevie Spark – Rather unknown before this fight, the fighter with two losses from Australia stepped up and beat an undefeated fighter in Montana Love, in Love’s hometown. One of the major upsets of the year, and now Spark is a player in the division.

Raymond Muratalla – He has been highly touted for some time now, but to stop a very tough veteran fighter like Miguel “Caveman” Contreras is an impressive feat. Muratalla is someone who is now in the position to make a run at the top of the division in 2023.

Denzel Bentley – He forced Janibek “The Boogeyman’s” hand over the weekend, and in a fight most thought he would get stopped in or loss every single round, he lost a narrow decision with some thinking Bentley did enough to win. Bentley even without a win improved his stock over the weekend.

Raymond Ford – Raymond Ford looked as good as ever picking up a stoppage win, and hopefully gets a significant opportunity from this performance. Raymond Ford didn’t look like a prospect tonight, he looked like a contender.

Thomas Mattice – A hard-luck fighter who had lost some fights that should’ve gone his way got the biggest win of his career defeating the undefeated Christian Tapia in his home state of Ohio. Mattice now should be in the mix.

Javier Martinez – A win over Marco Delgado is never easy, but this is now back-to-back tough opponents Javier Martinez has looked impressive against. Martinez has had some shaky moments as a pro, but he is looking to have found himself as a pro, and might be a serious problem in the future for a lot of the division.

Charlie Sheehy – The Bay Area lightweight with serious power continues to go viral with his celebrations after his knockouts.

Montana Love – It couldn’t have gone much worse. Montana Love sounded different all week, it was either a level-up moment where he proved himself as a pillar of Matchroom Boxing’s foundation, or it was going to be a lot of distraction in his local market of Cleveland, Ohio, which would get in the way. Sadly, it was the latter.

Love signed with Matchroom Boxing, last fall when Mikey Garcia lost to Sandor Martin and since hasn’t looked great. He stopped Ivan Baranchyk, which is looking right now as though that might have been just as much about where Baranchyk was, as opposed to where Love is, and stopped Carlos Diaz in his Matchroom debut.

Since he fought Gabriel Valenzuela to a close decision in which two points decided the outcome, and tonight he was dropped by the unknown Steve Sparks, who ended up winning the fight via disqualification, when Spark fell out of the ring.

Tommy Fury – Missed weight at some form of hybrid pro show, and exhibition bout, in Dubai. Fury is just struggling, as a Jake Paul fight is obtainable if he can just find forward momentum. Fury saw Jake Paul mock him as a commentator, as Fury got a very boring decision win.

Janibek Alimkhanuly – Alimkhanuly is a good fighter, but he isn’t the monster many hoped for. He is a cerebral fighter like Viktor Postol, who will give people trouble, but is also a fighter who at times can be risk-averse. Not getting a stoppage win over Denzel Bentley, when Felix Cash stopped Bentley, is rather troubling regarding his power in the middleweight division.

Sakaria Lukas – After fighting to a draw with “King Tug” earlier this year, Raymond Ford made him look less than stellar, as the goodwill he earned in the previous bout was washed away with the performance Ray Ford put forth. It is hard for b-side fighters I find to put together two great performances.

Christian Tapia – Tapia has fought on regional shows for most of his career, but developed a solid world ranking in the process. He faired well but lost a competitive fight to Thomas Mattice, which now puts him more than likely in the #11-15 range at the 130 lbs division, as I feel he entered this fight as a fringe top-10 fighter in the world.

Bradley Rea – Someone I saw as a potential world-level U.K. fighter lost a competitive and fun bout, lost nonetheless, as round nine was a round-of-the-year contender.