Adonis Stevenson: “I predict that Bika will lose by knockout for the first time.” 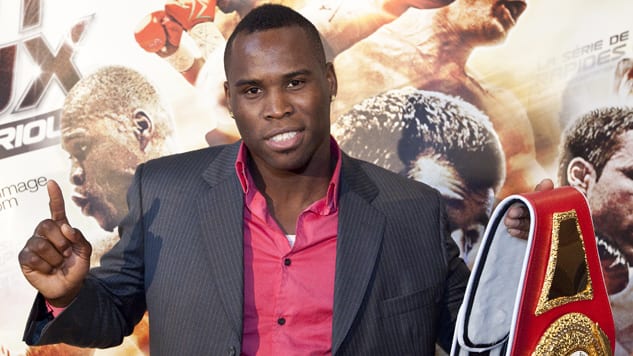 With Al Haymon bringing back championship boxing to primetime television, we’ve seen some tremendous match-ups be made. The upcoming fights make up for the stomach twisting 2014 Haymon gave us with his fighters. Now we have Keith Thurman taking on his first legitimate test in Robert Guerrero, the charismatic Adrien Broner taking on hard-hitting fan friendly fighter, John Molina Jr who has shown us before just how quick he can turn things around in fights. Many more fights to come and many more to be made. CBS is well known to be the sister provider of Showtime, where all of Haymon’s guys were broadcasted on before. Now he is looking to bring them onto primetime by slotting them into shows on CBS, NBC, Spike TV and if Haymon gets his way as he should, you can add BET to that list. One of the fighters who is making his way to CBS is the WBC lt. heavyweight champion, Adonis Stevenson. The Canadian based fighter had a very stall 2014, fighting only twice against lesser opposition. Many would have thought that by now, Stevenson would have the likes of Jean Pascal, Bernard Hopkins, and Sergey Kovalev on his resume. Oddly enough, he found a way out of all 3 of those fights. Instead, Stevenson now will be facing former super middleweight world champion, Sakio Bika.

Now, for those who follow boxing, we know who Bika is, we’ve heard the name, seen him fight. he’s solid, but he’s solid in the super middleweight division. As noted earlier, Stevenson is a division north, at lt heavyweight. So Bika will be moving up in weight to fight Adonis in Montreal, and exactly how much credit can you give to Haymon and Stevenson for the fight? A known name, but not a known name in division Stevenson currently claims he owns and runs as the best fighter. Bika is coming off a loss and a draw, back to back to Anthony Dirrell, and before that, some may recall his excellent showing against Marco Antonio Periban in 2013. Unfortunately Bika has only fought once in 2014 and isn’t much of a threat to Adonis, but this is boxing and anything can happen as we saw when Andrzej Fonfara dropped Stevenson in their matchup last spring.

None the less, the fight is happening, and Stevenson is ready to headline on CBS. “I am excited to be the headliner for first PBC event onCBS.” says Stevenson, who is known to be one of the power punchers of the division and though Bika has never been stopped before, this is a new weight class for him and Stevenson has plans to give him his first stoppage. “I know Bika will stop at nothing, so the fight will be spectacular and extremely offensive-minded. I predict that Bika will lose by knockout for the first time in his career.” We can only dream and hope that Haymon somewhere along the way matches Adonis up with a real test at lt. heavyweight. We already saw Stevenson jump the ship from HBO to Showtime when we all thought a matchup with Kovalev was on the horizon. Once there, he claimed he switched networks to secure a bigger money fight with Bernard Hopkins, and when that failed as well he was in line to take on Jean Pascal. None of those fights happened and instead Hopkins went over to HBO to take on Kovalev and now Kovalev is fighting Pascal.

The fight is scheduled for Saturday, April 4 at Pepsi Coliseum in Quebec City. Tickets are on sale now priced from $25 to $250 for ringside.

Adonis Stevenson: “I predict that Bika will lose by knockout for the first time.”