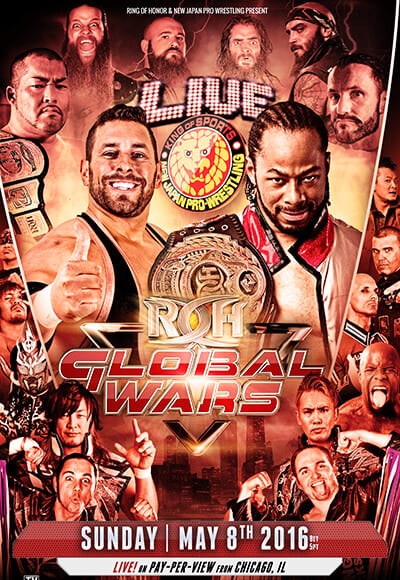 In the opening match we got to see a fantastic fatal four way match. Dalton Castle vs. Roderick Strong vs. ACH vs. Adam Page in a #1 Contender match for the ROH Television Championship. It was a very entertaining bout that saw a lot of high flying action spots. ACH was definitely the show stealer in this one, however, Dalton Castle took all three men out and picked up the win. 3/5 stars.

Next up was Jushin Thunder Liger and Cheeseburger taking on The Addiction. Pretty quick match, everyone got to get some good spots in and Cheeseburger picked up the win for his team after a surprise roll up. 2/5 stars.

The next match is for the ROH Tag Team Titles. The Briscoes vs. War Machine. This match amazing! The Briscoes gave it their very best, many near falls and a lot of great tag team action in this one. The match pacing was very good, there was not any dull moments in this contest at all. I give it 4/5 stars without a doubt. The War Machine retained their Tag Team Titles in a pure classic. All four men received a standing ovation when it was all said and done.

Kyle O’Reilly vs. The IWGP Champion, Tetsuya Naito. This was a very good clash of styles between these two. Fair paced match with a lot of back and forth see-saw type action between the two. Both men deserve a lot of praise for this match. It was a perfect match following the epic tag team match we just witnessed. A lot of memorable moments in this match, a really good spot with both men trading forearms mid-ring helped set up the closing moments. Tetsuya Naito picked up the victory and threw the IWGP Championship down after the match in a show of disrespect. 3/5 stars.

Michael Elgin and Hiroshi Tanahashi vs. Moose and Kazuchika Okada in a tag team contest up next. The crowd breaks out into a “Holy Shit” chant before the match even starts, followed by “This is Awesome!” Great dual tag team action between Moose and Okada mirroring moves at the same time against their opponents. A big running dive to the corner and to the outside from Moose brought the crowd to their feet. The team is extremely polished together as they did a lot of damage on Tanahashi, isolating him from tagging his partner. Elgin and Moose had a nice power struggle that led to Elgin getting the better of him. Moose and Okada pick up the win in a 3/5 star match.

Bobby Fish vs. Tomohiro Ishii in the ROH Television Championship match up next. This match was a very tough back and forth battle, both men gave and take a lot of punishment in this one. Very brutal action between the two men that led to a lot of good strong spots. In the end, Bobby Fish won via a sleeper hold after Ishii passed out and could not beat the count. Bobby Fish is the new television champion! 3.5/5 stars for this one.

The Motor City Machine Guns, Matt Sydal and Kushida vs. The Bullet Club (Nick and Matt Jackson the Young Bucks) and Guerillas of Destiny (Tama Tonga & Tanga Roa). This match started off fast paced from the beginning with a lot of high flying action. This match is a pure spot fest, the crowd is really into it. Very entertaining match after it fully got under way. There was A LOT of great spots in this one, all eight guys did an incredible job in a fast paced spot filled match. The Bullet Club was victorious. 3/5 stars.

Time for the main event! Jay Lethal vs. Colt Cabana. The crowd is in full support of Cult Cabana here tonight, his hometown crowd is ready for him to win the championship. Jay Lethal has the better of the two to start the action, proving why is is the World Champion. Cult Cabana showed his experience early on with some very smart counters, using Lethal’s momentum against him without wasting his own energy. After getting involved early on in the match, Taeler Hendrix has been banned from ringside! Jay Lethal has definitely gained control of the match at this point, but without Hendrix by his side things will definitely even out. Jay went for a lethal injection early and Cabana rolled him up for a 2 and a half. Cabana regained control of the match now. Cabana paying tribute to Dusty Rhodes with a series of elbows. Lethal is attempting to get control of the match but Cult is using his ring savvy to continue to control the match. Finally Lethal gains control after a Macho Man type elbow drop to Cabana. Cult continues to battle back and hits the Chicago Sky Line to Lethal for another near fall. Taeler Hendrix comes to the ring to stop the action as Jay Lethal is close to tapping out. The Bullet club comes out and super kicks the referee and Taeler. The bullet club offers shirts to both Lethal and Cabana and the lights go out. When the lights come back on, Adam Cole is seen in the ring with the young bucks and they super kick both Lethal and Cabana. The rest of the bullet club members come out from the back and they begin to take out all of the security. The young bucks hit super kicks on the commentators and take over the commentating booth. Toma Tanga begins to go to work on Jay Lethal and zip ties him to the top rope. Adam Cole delivers three super kicks and Lethal is out cold. Both Lethal and Cabana receive even more super kicks. Bullet Club continues to take over everyone that comes out, including the camera men in the ring as the PPV comes to an end.