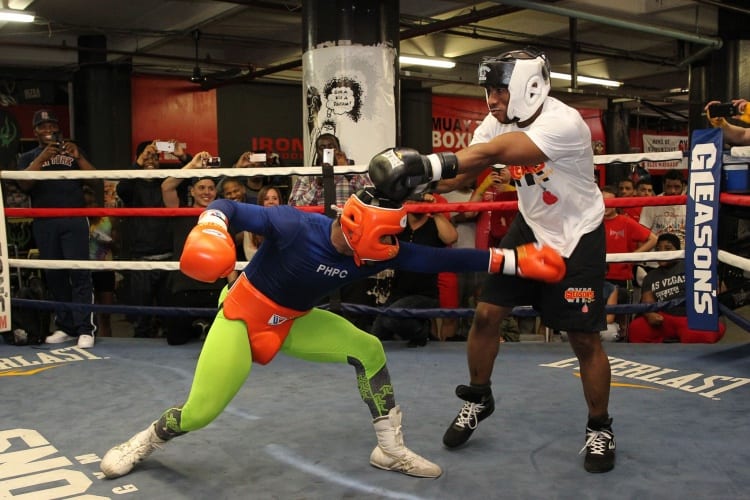 Tickets for the June 25 event, which is promoted by DiBella Entertainment, start at $49 and are on sale now. Tickets can be purchased online by visiting www.ticketmaster.com, www.barclayscenter.com or by calling 1-800-745-3000. Tickets are also available at the American Express Box Office at Barclays Center. Group discounts are available by calling 844-BKLYN-GP.

Porter, along with his father and trainer, Ken, are training at the world famous Gleason’s Gym as they prepare for Shawn’s primetime battle in the county of Kings. Porter invited Barak Bess of Sirius XM, Rhett Butler of The Shadow League and Nestor Gibbs of Tha Boxing Voice to try their best in the ring against the former champion, leading up to the rounds with Charlamagne.

“It was nice and relaxed in there. My main goal was to not get caught with anything flush and give people something to talk about. It was really fun. These guys gassed out quicker than I thought. They might have thought I was coming to knock them out.

“I hope these guys learned a little something and found out how much harder it is to do than to talk about.

“Charlamagne did well. He came in with some toughness and a bit of a game plan. He knew I was here to put on a show, but he competed.

“It’s easy on the outside, but it’s hard when you get inside this ring. To get them to feel that kind of excitement from this crowd, now they know. They were a little hyped up and in a world championship fight you have to learn how to hone that energy into something productive.

“I feel really good and I’m glad to be here. I’m happy we came out to Brooklyn. It’s the tail end of camp and I’m ready to fight. I can’t wait for June 25.”

“I I expect Shawn to take it easy on me. Hopefully he doesn’t bruise me up too bad.

“This will not be an Apollo Creed-Ivan Drago situation. Shawn doesn’t have anything to prove against me. He’s ready to prove it June 25 against Keith Thurman, not against Charlamagne Tha God right now.

“I watch boxing, so I respect the craft. I was in there for two rounds and I feel like I was running for two hours. This is no joke, respect boxers. If you see them in the street, don’t mess with them.

“He was faster than I thought he was. Hand speed, foot speed and he had power. He got me pretty good a couple times, I’m glad I had this gear on.

“Porter and Keith Thurman are two of my favorite young fighters. ‘One Time’ does hit hard, but if he doesn’t move, then Porter is going to be able to get on the inside and I think he can knock him out.

“I really like both guys, so I don’t know who is going to win. I’m not a gambling man, but if I had to pick, I put my money on Porter.”

“We’re fighting in Brooklyn and at Barclays Center and every time we’ve been there they’ve opened up their arms to us and been so welcoming. Shawn won his first world title here. So I thought, let’s go to Brooklyn and make it our home and become a part of what is going on here.

“Shawn is in excellent shape, so he doesn’t need to get in shape during camp. We didn’t have to consider that when we decided to come to Brooklyn.

“The people in Brooklyn have rolled out the red carpet for us. That’s why we’re here. We felt welcomed every time we came here to fight or to watch a show. I said let’s go home, let’s make Brooklyn home.”