Well, this is confusing as Jarell “Big Baby” Miller (18-0-1, 16 KOs) is caught in an odd promotional situation.

Our friends over at ThaBoxingVoice.com recorded this video below that stated boxing superstar Adrien Broner is actively seeking to sign Miller at the present time to his promotional company, About Billions.

Then like clockwork on Tuesday, Miller released this statement on his Instagram which we have posted verbatim. In case you want a summary, it basically is saying that he is out of his contract with Dmitriy Salita of Star of David Promotions also known as Salita Promotions.

To quote my attorney, Leon Margules, Esq. from a letter which he addressed to Dmitriy Salita from Star of David Promotions a/k/a Salita Promotions “You are hereby notified that due to your clients’ breaches and its continued and persistent wrongdoings, the Promotional Agreement dated March 15, 2014 with Jarrell Miller is terminated and he is free to seek other opportunities in furtherance of his career”.

After defeating Fred Kassi on August 19, 2016 on ShoBox, my success clearly should have been a time of celebration with the eyes of the boxing world tuned into a coming out party for the future heavyweight champion of the world. Instead, I was forced into the unwanted position of having to consult legal counsel on my promotional status.

The truth is that I have done everything within my power to move up the ranks of the heavyweight division. I have defeated all comers in spectacular fashion. And, I have helped to promote my career both inside and outside the ring. I have willingly accepted each and every challenge put before me. I have sacrificed my time and energy. And, as everyone in the world of boxing knows, I, as well as all boxers, have put my health and safety on the line each and every time that I enter the ring.

Although, I do not wish to detail all the specific breaches perpetrated upon me under the Promotional Agreement, it is important to state that not only was I not paid my base minimum purses under this Agreement, but I was grossly underpaid based upon the difficulty and significance of some of these bouts. But, besides the issue of compensation, I can clearly state that my promoter failed to act in good faith and failed to make best efforts to promote my career.

At this time, I have the support of my team, my family, and my ever growing legion of fans. I ask for your continued support. And I ask everyone to stay tuned to my future. I promise that the best is yet to come.

As I have always prevailed in the ring, I will prevail in this situation as well. We will succeed and you will soon see me crowned as heavyweight champion of the world.

It took little time for Dmitriy Salita to return fire as he stated his contract with Miller is still “valid and subsisting”.

Salita in a prepared statement expressed frustration that a fighter his promotion helped bring from the ground level is now trying leaving once he is now able to return upon investment.

Salita further that he plans to take legal actions meaning that you will probably not see “Big Baby” in the ring anytime soon. 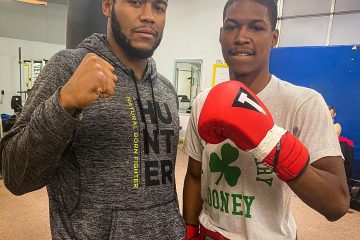