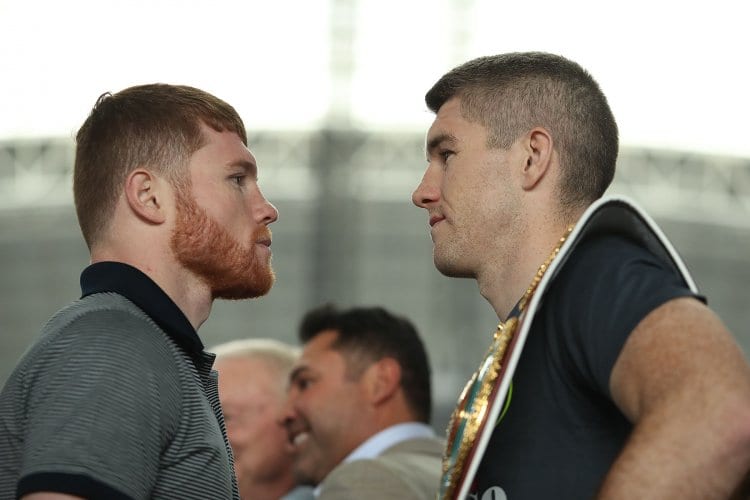 As fight fans around the world already know, current WBO Jr. middleweight champion Saul Alvarez (48-1-1 34KO’s) will be making his return to the ring to take on former WBC middleweight title holder and son of legend Julio Cesar Chavez Jr. (50-2-1 32KO’s) on May 6th.  The bout will take place at the T-Mobile Arena in Las Vegas Nevada and will be televised live on HBO PPV and will be contested at a catch weight of 164.5 pounds.

According to most fans and media members, this is a fight that Alvarez should win.  However, I personally can easily see this fight going the other way for various reasons.  Chavez Jr. stands at 6’1 in height and possesses a 73 inch reach and is undoubtingly the bigger man going into this fight.  Canelo only standing at 5’9 in height and possessing a 70 inch reach will be his first time fighting above 155lbs.  Chavez on the other hand has done his best work at 160 lbs and managed to win the WBC middleweight world title despite originally having low expectations from the general boxing media.   Chavez managed to rack up quality wins in his career over the likes of Sebastian Szpik, Peter Manfredo, Andy Lee among others.

However, aside from the size factor this fight possesses a stylistic problem for Canelo in my opinion.  Canelo looks his best when his opponents either come straight at him or stand in front of him, but he has never fought someone with the size, durability, body attack and punching power of Chavez Jr.  If Canelo was to win this fight, I assume he would have to do so by boxing, moving around the ring and working off the jab.  The only problem is, I don’t remember Canelo ever fighting that type of fight before.  Though he has fast hands he doesn’t have quick feet.  Canelo tends to always have his heavy feet planted.

Due to these reasons and circumstances, I believe if Chavez dedicates himself to training and is mentally in a good state mind he should be able to win this fight.