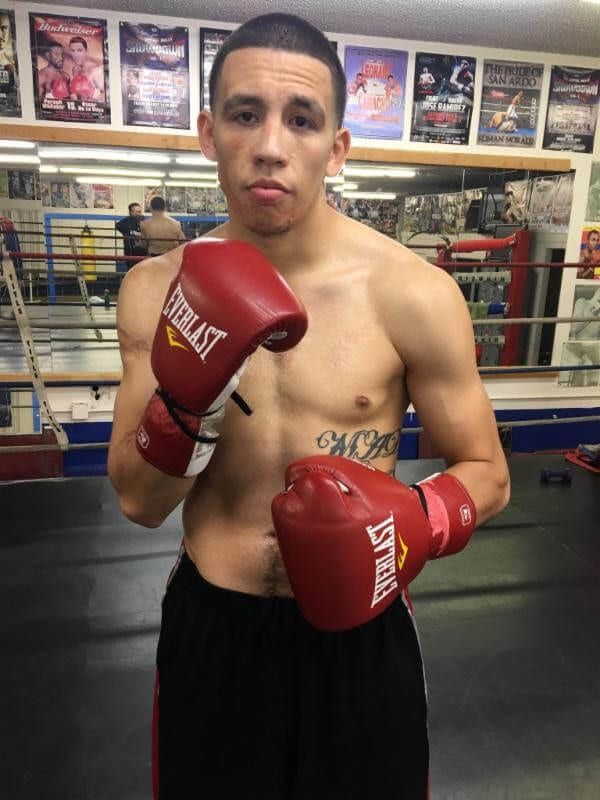 photo: Pete Lopes
Unbeaten prospect Marcos Hernandez will look to keep his perfect record intact when he battles once-beaten Kyrone Davis in action featured on Premier Boxing Champions TOE-TO-TOE TUESDAYS on FS1 and BOXEO DE CAMPEONES on FOX Deportes, Tuesday, March 28 from Robinson Rancheria Resort and Casino in Nice, California.
Televised coverage begins at 9 p.m. ET/6 p.m. PT and is headlined by undefeated prospect Leduan Barthelemy battling the Dominican Republic’s Reynaldo Blanco in a 10-round super featherweight contest.
Tickets for the live event, which is promoted by TGB Promotions, start at $20 and are on sale now. To purchase tickets, call the players club at (707) 262-4000.
Here is what Hernandez had to say about his training camp, his showdown with Davis and more:
On his current training camp:
“Like always, training camp has been tough. My team and I put in a lot of hard work. I have some great sparring in Los Angeles and the Bay Area, with some top-level guys.  I know all the hard work will pay off on fight night.  There are a couple of more days left before we wrap camp up.  All in all, it’s been a great camp.”
On facing Kyrone Davis:
“Kyrone Davis is a very good fighter with a lot of skill.  He’s never been knocked out so I know he has a good chin.  This is a fight where the winner will get another opportunity to take his career to another level.  We have a nice game plan that we will impose on Davis.  I must take control from the first round and make my adjustments from there.”
On making his third appearance on FS1:
“I’m very happy to be back fighting on FS1. This will be my third consecutive time fighting on TOE-TO-TOE TUESDAYS and I can’t wait.  I know a lot of my fans back home in Fresno will be tuning in.  I just want to bring another exciting fight to the fans.”
On fighting at the Robinson Rancheria Resort & Casino:
“I like fighting up at the Robinson Rancheria Casino.  Being that this will be my third fight up there, I’ve developed a bit of a fan base with the local fans.  The venue is nice and the fans are up close so it can get loud in there.  I enjoy putting on a great show for everyone in attendance.”
On making his 2017 debut:
“I’ve eagerly been waiting to get back in the ring since I last fought in September.  I want to make a statement being that this is my first fight in 2017.  I know if I keep winning I’ll be back in the ring with the stakes much higher.”
Tags:CAFS1Kyrone DavisMain Event Boxing GymMark HernandeMark HernandezNiceToe To Toe Tuesdays