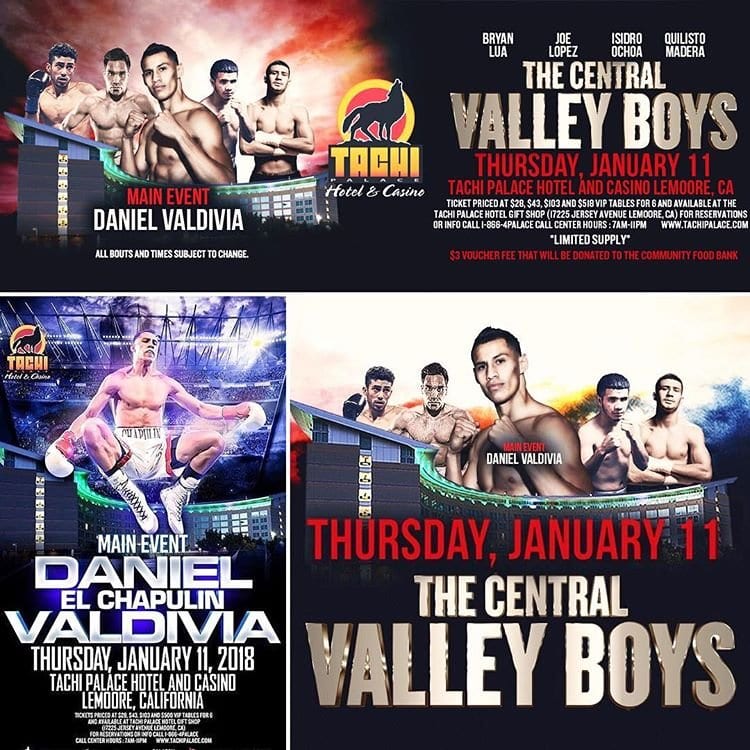 On January 11th in Lemoore, CA, boxing returns to one of California’s most beloved venues, Tachi Palace Casino and Resort in Lemoore, CA for a stacked card entitled “Central Valley Boys” headlined by Tulare, CA’s own junior middleweight Daniel Valdivia rematching Vladimir Hernandez, whom he lost to last summer, in a make or break fight for the Tulare prospect.

Valdivia, a Central California standout is looking to resume where he feels his career should be after a loss to Hernandez in an awkward fashion on an Iron Boy show in Arizona. Hernandez is looking to prove it was not a fluke as well as could secure himself some good fights down the road with two wins over a prospect.

The card will also features Fresno, CA super middleweight Joe Louie Lopez vs Calvin Metcalf in a crossroads fight for both fighters. Lopez, a former prospect suffered a stunning KO loss in the first round of a bout at Tachi Palace a year ago and followed up with a decision loss to Stockton, Ca middleweight Quilisto “Kilo the Kid” Madera. Lopez, a career athlete is looking to continue forward momentum on his career as he has started training at Virgil Hunter’s Gym mainly with coach Jeff Rael. Metcalf, though not decorated in any sort of way is rugged, tough and coming to win.

Super featherweight Victor Morales will look to keep his undefeated streak intact as well as turn some heads as he fights rugged inside fighter Edgar Cantu. Super lightweight Edgar Martinez, who is managed by Monica Bradley, and helped by Tim Bradley is looking to make another appearance in the Fresno, CA as he fights Javier Rodriguez. Robert Garcia trained lightweight Bryan Lua will face game journeyman Mario Aguirre, super featherweight Isidro Ochoa of Fresno, CA will face undefeated Gabriel Rodriguez in a battle of unbeatens.

Rounding out the card is Concord, CA’s own Angel Cordon Jr., who is returning to action after his first round KO win last May in Reno, Nevada.

Tickets are few and far between but are still available at https://www.etix.com/ticket/p/7130664/top-rank-championship-boxing-lemoore-tachi-palace-hotel-casino?cobrand=tachipalace