In front of a sold-out crowd at The Hanger in Costa Mesa, CA, Roy Englebrecht SoCa Fights returned with another rendition of “Fight Club OC”.

In the main event, lightweight Roger Gutierrez (6-1-1 4KOs) picked up a 4-round technical decision over Jarret Jeter (7-2-1 2KOs) after a clash of heads pre-maturely stopped the bout. The bout went to the cards which the judges scored the bout 39-37,38-39-39-38 for a technical split decision for Roger Gutierrez.

In the opening bout, lightweight George Acosta (4-0) was in a fairly competitive bout with Teodoro Alonso (0-1). 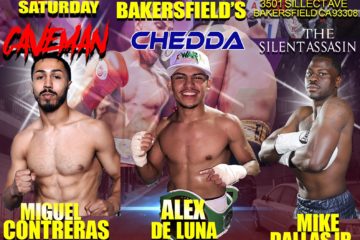