WELL, THAT WAS FUN, BUT EUBANK JR. SEEMS OVER

Despite an interesting persona and a lot of hype, Chris Eubank Jr. lost badly to George Groves, a fighter who prior to this bout was void of winning a big fight. Eubank fought without a jab and simply ran forward for the majority of the fight walking into Groves jab in a fight that was compelling, but not necessarily one of the better fights of the year. 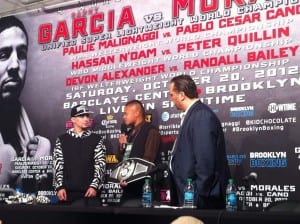 Danny Garcia is back!

The vocal hated fueled fans of boxing on Twitter may hate Danny Garcia, but Garcia is very talented and even when facing Brandon Rios, a Rios who is fighting essentially two weight classes from his best days, provided some trouble, but Garcia should that he has the ability to box as well as has power at the welterweight division catching Rios who threw a lazy jab with an overhand right.

After the fight, Shawn Porter and father Kenny Porter stormed the ring to call out Danny Garcia, but it seemingly fell on deaf ears as both fighters yelled in the ring, but the fans and the broadcast appeared uninterested which is not a promising sign. Porter, one of the best in the division seemingly can’t get a top contender to fight and now is relegated to pro wrestling tactics to catch fire on a beef of sorts to get a fight.

Nonetheless, Garcia looked good, it will be exciting to see him when he returns to the ring. Garcia also showed an ability to box when needed, but also to sit on power shots to garner respect and/or a knockout.

David Benavidez dominated from start to finish Ronald Gavril in a rematch of their competitive title fight from last year. Benavidez, who righted his wrongs from last year in a fight in which his belief in his own power appeared to get him in trouble i.e. gas him out. In the rematch, Benavides was more judicious with his punch output as well as targeting Gavril’s body, which slowed Gavril down.

Yordenis Ugas seemingly now has a shot at Errol Spence Jr. in the future as he destroyed Ray Robinson in seven rounds dropping him several times before stopping him in the seventh round. Ugas, who found structure in his boxing career after changing camps now is poised to face the most avoided man in the welterweight division. The new question is did Ugas secure himself a fight date with Spence for Spence’s homecoming fight in Texas.

The majority of fight fans may not of known about Devon Alexander vs. Victor Ortiz on FOX and that might be for the better. The fight wasn’t terrible, but it wasn’t noteworthy either and showed elements of why people hate boxing, when Alexander seemingly won the fight clearly, but the fight was awarded a draw. With both fighters being former boxing superstars, who are now falling into the realm of a gatekeeper for the next generation, a draw doesn’t really help anyone in this situation moving forward.

Not to mention, it wasn’t the most compelling fight on paper and sadly lived up to the bill in real life. In short, it was a good return for Devon Alexander voided by a bad decision.

Caleb Plant IBF Supper Middleweight #1 contender, WHO DOES HE FIGHT?

Caleb Plant soundly beat “Porky” Medina, who served as one of Plant’s bigger tests of his career do to Medina’s punch output. Plant neutralized Medina as well as forced him to hit air early and often. Medina also missed weight the day prior.

Plant will more than likely face Caleb Truax in the near future for Truax’s IBF super middleweight world title. Andre Dirrell and Jose Uzcategui will do battle as for what seems like a version of this title, but it seems likely Plant will face Truax and then unify down the road.

Three loss professional fighter Isaac Zarate, who is signed to Thompson Promotions, was pushed to the limit against Christian Ayala. Though never fighter may ever be a true A-side fighter, Zarate is a beloved fan-friendly fighter in Southern California, who will entertain for years to come.

Also, Ruben Villa of Salinas, Ca, continued to look impressive as the future world champion continues to show off his pedigree, skills, and prowess as he appears poised to be moving towards eight round fights by the end of the year.

In a sleepy affair that proved more awkward than anything, Heather Hardy defeated Ana Julaton in an MMA fight Friday night for Bellator MMA. Hardy dominated from start to finish, but the lingering feeling I got was that both fighters are more suited for boxing.

In a final bit of news, Marie Eve Dicier picked up a majority decision win in Montreal over Marisa Nunez to capture the NABF super welterweight title. Dicier is a potential opponent for the exciting group of fighters at or near that weight class, such as Clarissa Shields