Sriskat Sor Rungviasi will look to answer some questions on Saturday night at The Forum in Inglewood, CA, as Rungviasi defends his title against Juan Francisco Estrada. The sinking feeling in my gut, which might not be fair, is that Rungvisai might have caught Roman “Chocolatito” Gonzalez after years of tough weight cuts and potentially moving up a weight class too much. Estrada should be smaller than Rungvisai but seems fresher than Gonzalez and also has weigh-in’ed heavy than Rungviasi in every weigh-in prior to this bout.

We know what to expect from Estrada, tactical skill, incredible patience if not too much patience and respectable power. The flip side is we really don’t know what to expect from Rungvisai, but if he wins he jumps into the top ten pound-for-pound. It might not be fair, but a part of me feels Rungviasi was the perfect storm of events to catch Roman “Chocolatito” Gonzalez, but that against Estrada he might be shown to be mortal, but Saturday will tell all.

Carlos Cuadras, Donnie Nietes, and Brian Viloria will all be in action on Saturday night. Most notable is if Nietes does well he could find himself in a fight with the aforementioned boxing legend, Roman “Chocolatito” Gonzalez in an upcoming card in the future.

Joseph “JoJo” Diaz Jr. has done what has been asked of him, staying active, fighting tough opposition such as Manuel “Tino” Avila, yet he finds himself in a stay busy fight with Victor Terrazas, a game opponent, but one that doesn’t really appeal to casual fight fans and void of the big fight feel Diaz Jr. has earned. Even worse, Diaz is fighting on a Thursday night on ESPN2 making the cards as a whole feel like a stay busy card not just for Diaz, but for ESPN programming and Golden Boy Promotions, as it looks like nothing more than a replacement for say college basketball programming in the evening.

Diaz Jr. is currently the #1 contender for two belts in the featherweight, the WBC held by Gary Russell Jr and the WBO held by Oscar Valdez. At this point, Diaz Jr. is deserving of a title fight and deserves a shot after this bout with an opponent that engages the masses.

Oscar De La Hoya has gone on record saying Ortiz is one of the future stars of boxing and it is hard to argue. Ortiz has incredible power, great skill and from all interactions I have had with him he loves boxing. Ortiz has won all of his eight professional fights by knockout and is scheduled in his second eight-round fight, though his first eight-round fight against a decent opponent only lasted one round. Ortiz will be fighting Jesus Rodriguez in the co-main event on ESPN on Thursday and certainly worthy of watching.

Callum Smith, who was supposed to fight Jurgen Braehmer will now face well-known kickboxer Nieky Holzken, after Braehmer pulled out of the bout do to an illness.

The winner of this bout will face George Groves. In a fight, I am excited about two local draws Thomas LaManna and Gabriel Bracero will fight in a regional super-fight between fighters who haven’t quite been able to make a statement on the national stage but are very evenly matched. This is the type of fight that helps develop an interest in the sport of boxing in a local market and builds an organifan basese. If you get a chance and are in need of watching a bout this weekend on Facebook, this is the one to watch as LaManna is the favorite, but Bracero presents some interesting problems that are worthy of a watch

Iron Boy Promotions is promoting another card this weekend and one of their original fighters, Alexis Santiago is returning, but this time against an up and coming prospect Carlos Castro for the WBC U.S. super bantamweight title and a fight that seemingly will be the end of the road for Santiago. Iron Boy puts together solid shows that don’t get enough support nationally for the quality of card that they put on, but have a worthy main event on Friday in Arizona. 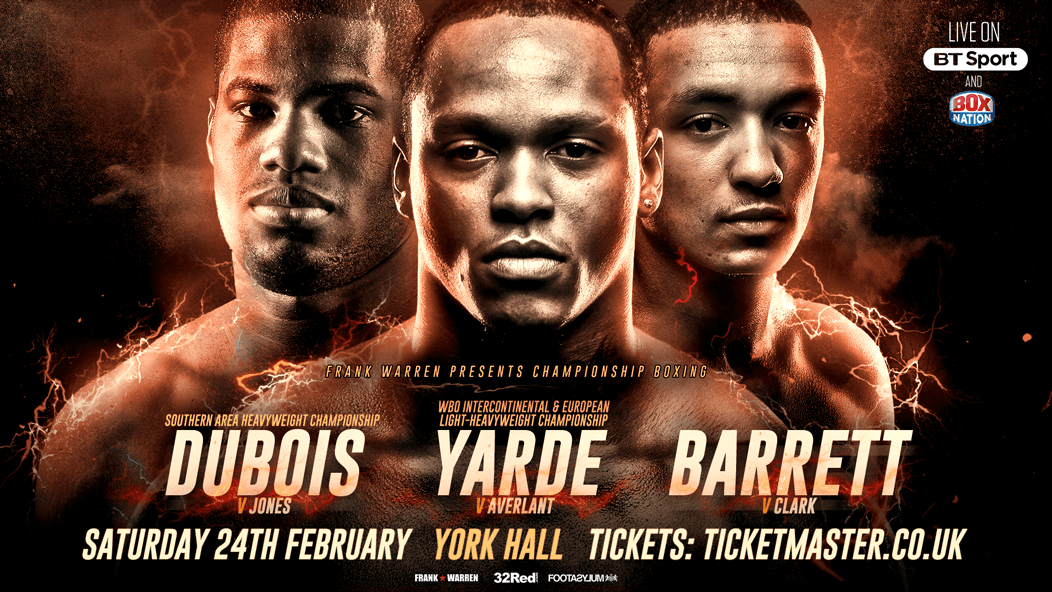 Two prospects from the U.K., light heavyweight Anthony Yarde and heavyweight Daniel Dubois will fight in separate bouts. These are fighters who expectations are high on and it is noteworthy knowing that they’re fighting, but the caliber of opposition isn’t very high as they’re still in the developmental phase of their career.

2016 U.S. Olympian Antonio Vargas returns on Friday in Kissimmee, Florida. Vargas has been moved along well although feels to be a Top Rank fighter, who has felt the ill effects of the ESPN deal for Top Rank as the lack of regional shows from the old Telemundo “Solo Boxeo” shows Top Rank use to consistently run has found Vargas struggle to find a place on cards. Thus, Vargas has spent his whole professional career fighting in Florida

Regardless, Vargas is a former Olympian in the flyweight division and could make noise down the road and is worth watching the progress of his career.

What was suppose to see a good women’s boxing rematch between Aleksandra Magdziak Lopes and Natasha Spence on Friday in Rhode Island will now see super welterweight Roy Oliveria Jr. taking on very experienced pro, Edwin Soto. Neither fighter, per their record, has a ton of power, but the bout promoted by CES Boxing and what seems like they will either stream the fights or put them up shortly, has one of the more competitive bouts of the weekend, that could be worth a look.

Canelo vs. Golovkin II will take place at T-Mobile Arena on May 5th