The fight week has turned into a back and forth name calling fest, albeit seemingly more so (or should I say louder) from Deontay Wilder’s side, but that doesn’t take away from this being the best heavyweight bout on paper in modern history. Despite Ortiz failing two drug test (even though both tests can be debated) and Wilder somewhat being very vocal about past heavyweights not helping the present generation, Ortiz’s drug past and Wilder’s belief that the media doesn’t believe that he is a great fighter, we have a very good fight on Showtime, this Saturday, as the heavyweight boxing picture will begin to take shape.

Ortiz is the longer fighter, a southpaw, and the more classical trained boxer, that being said Wilder is the most unpredictable, explosive heavyweight in modern times and being a heavyweight with above average knockout power in a division in which everyone hits hard is quite a gift and something will cause hesitation in any reasonable fighter, fighting him.

The question in this fight remains; how good is Deontay Wilder? If Wilder stops Ortiz, he is easily in the top 10 pound-for-pound, conversely the same could be said for Ortiz. Ortiz has struggled to cut the ring off against Tony Thompson and Malik Scott, both of whom do not move like Wilder. That being said Wilder struggled against Artur Szpilka, who is a southpaw when he fought him.

In short, this fight is really interesting since both fighters have shown flaws in what the other excels at.

Last year, a very good fight between Andre Dirrell and Jose Uzcategui was overshadowed by ugliness, when Leon Lawson, Dirrell’s uncle, punched Uzcategui after the fight was over, which overshadowed the awkward ending of the fight in which it appeared Dirrell had been knocked out, but Uzcategui was disqualified based on the fact that the round had just ended when the punch landed. Look it up on YouTube if you haven’t seen it, it is very bizarre.

Neither fighter commands much media attention, but the fact that this is for the interim IBF super middleweight championship means that at the very least the winner will returning later this year in another interesting bout or possibly unifying with Caleb Truax.

Day, a sparring partner to the stars has been in seemingly everyone’s camp sparring with the likes of Daniel Jacobs and  Ryota Murata, with people not just being impressed with his skills in the ring, but also the type of person he is as well. Day is a lovable, hard worker, who had picked up to two losses and seemed destined to be a b-side fighter (an opponent), but a win over undefeated Eric Walker last July gave new life to Day’s career.

Davis, on the other hand, seemed destined to be a major network mainstay with a famous coach, Stephen “Breadman” Edwards, a solid backing with his Philly fanbase and unmatched strength at the weight class. Yet, Davis’ career hit a snag when Davis lost to Junior Castillo, who beat him and dropped as well. Davis rebounded with a win over Marcos Hernandez of Fresno, CA, but now will not get that streamline push to the title with a loss on his record as the fights now seemingly see Davis fighting tough fighters with equal resumes as a recent trend.

The bout which will be a ten-round affair could see the winner finding themselves in the top 15 a sanctioning body and landed a marquee fight this summer, not to mention that this fight could as just be flat-out good.

In the underappreciated world of women’s boxing, Alicia Napoleon has done enough to garner a world title shot as she fights undefeated Femke Hermans for the WBA super middleweight title. Napoleon, who is a gym owner and has a modeling contract with Asics, seems like the perfect DiBella Entertainment, New York-based fighter who is talented, attractive and appears to be through social media able to sell a lot of tickets. Oh, and did we mention she has called out, Clarissa Shields as well and that fight would be made at a catchweight, and for sure broadcast on television.

That being said this is not a shoe-in for Napoleon who when stepping up in competition to face Tori Nelson lost a wide decision a year and a half ago. Hermans is largely unknown, but that could be a good or bad thing for Napoleon, who is still proving herself in the professional ranks. Napoleon could also fight recently signed DiBella fighter Raquel Miller as well in the future

Willie Monroe Jr. returns after his loss to Billy Joe Saunders in a stay-busy type fight, which is scheduled for eight rounds, even though he tried to petition last week for a shot Jermall Charlo, who lost his opponent last-minute and is off the card.

Middleweight Sergiy Derevyanchenko has a deceptively hard opponent on Saturday night in Dashon Johnson, a fighter with a pedestrian record, but great, power, toughness and craft that he can upset any fighter and in my opinion, even a world champion. Derevyanchenko is the forgotten middleweight, who despite being the number one contender for Gennady Golovkin’s IBF middleweight title, seems to be often forgotten in many conversations and is void of any watercooler talk.

Former IBF heavyweight champion Charles Martin will face Curtis Harper, who gave Chris Arreola an honest fight on Spike TV, a few years ago. Martin is a fighter we truly don’t know how invested in the sport he is, so seeing how he fares will be interesting. Terrific amateur stand-out Richardson Hitchins will be in action in his first six-round bout as well. Sergey Kovalev appears poised to have a “Krusher” Kovalev special as he fights Igor Mikhalkin in what feels like what HBO did with Kovalev prior to his two fights with Andre Ward, have Kovalev fight guys who seemingly are outgunned by him and get spectacular knockouts on television. Kovalev and Mikhalkin are also friends, which makes this fight awkward as well as Kovalev appears to be heading into the second act of his career much like George Foreman in which is more jovial and happy, less of the menacing Kovalev, who stopped people brutally. That being said, most people feel this fight will go limited rounds and be over before the fourth round bell sounds.

The whole world is underestimating Mikhalkin coming into Saturday’s HBO Boxing main event, let’s see on Sunday if that was for good reason or if we should have done more research prior.

How good is Bivol?

One of the biggest mysteries come Saturday we hope to solve is; how good is Dmitry Bivol? Bivol, who had over 200 amateur fights is the WBA light heavyweight champion in mere 12 fights, but also hasn’t the toughest opposition either. Sullivan Barrera is a top 10 light heavyweight, who holds legitimate wins in the division over Joe Smith Jr and Vyacheslav Shabranskyy, marks the first major step-up in competition.

Judging by how much HBO Boxing has invested in Bivol, it seems that they believe he will fair well, but this seems like quite the test for a young fighter.

Vaughn Alexander, the older brother of Devon Alexander, who saw legal troubles delay his professional career is back in action. Alexander is a pressure fighter, who seeks to stop his foe and is being fast-tracked as he is already 32-years-old after serving 11 years in prison. It is also interesting to watch some of Alexander’s training videos and his personality is very entertaining as he should be poised for a big fight by the end of the year, not mention Alexander comes off as a likable, hard-worker.

Speaking of likable, Frank Galarza has had an up and down career, one of his highs, knocking out John Thompson on ShoBox followed by one of his lows, as he lost to Jarrett Hurd, who now is a world champion. Galarza fights a former successful BKB fighter, who has seen mixed success in the professional ranks in Ed Paredes, as Galarza needs to win this fight and look good to keep his boxing dream alive.

Josh Taylor is a fighter that falls into the category of a beloved fighter by hardcore boxing fans, who has yet to become known in the United States. Taylor has done extremely well in knocking off Ohara Davies and an aging Miguel Vasquez, but hasn’t gotten the win that has separated himself from being a regional fighter just yet. Taylor this weekend will be in a stay-busy type fight as it seems that he is waiting to gear up for a major title fight in the near future.

Taylor was originally set to fight Humberto Soto, a slight step-up in competition, but the perfect match-up for him to progress at this given time. I am not sure what happened, but he is now fighting Winston Campos, a fighter with a good record and who has never won outside of his country of Nicaragua.

Kell Brook will be returning this weekend in the junior middleweight after a devastating loss to Gennady Golovkin at middleweight and lose his IBF welterweight title to Errol Spence Jr by way of brutal stoppage as well. Brook will return against Sergey Rabchenko, who is trained by Ricky Hatton, or at least was at one point his career, but has faltered in his step-up bouts against Anthony Mundine and Tony Harrison.

This fight is a crossroads fight for both fighters, but the general public will assume Brook should still have a glimmer of his former champion self to get past Rabchenko. 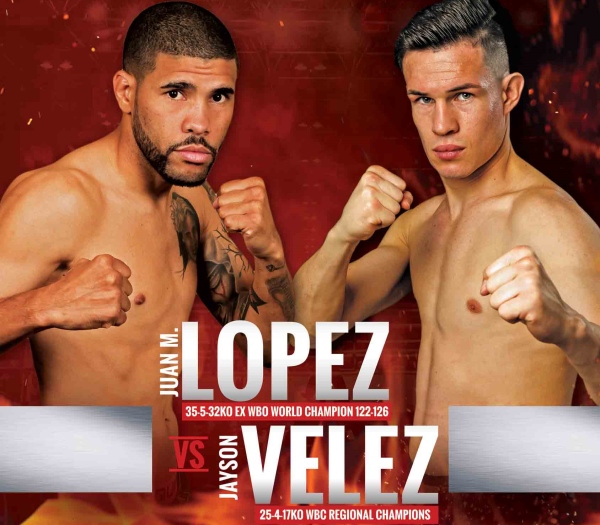 Juan Manuel Lopez will take on Jayson Velez in a delightful regional fight. Neither will compete at the highest levels anymore being that they both have seen better days, but Puerto Rican pride and tension should be high and the action should be decent at the least and outstanding at best. This could be the fight of the weekend, even though it has no consequence in the world landscape of boxing.

Christian Carto (13-0 11KOs) takes on James Smith (12-1 7KOs) at SugarHouse Casino. Carto has decent hand speed for a slugger and loads up on shots just enough to make fights interesting, if Carto continues the path he is on, he will find himself in good shape in a few years fighting on television and for a chance at a title at some point. Carto, a worthy prospect to watch is in an undervalued weight class, bantamweight, but has a style that fans enjoy. Carto is a very good body puncher though at times throws punches a bit wide for my liking.

Oh and by the way, Carto is on his 14th fight for only being pro for a year and half. That is a very active fighter

Olympian Conwell back in action

Charles Conwell was the forgotten middleweight Olympian who lost in the first round of 2016 Olympic Games. Though Conwell has signed with DiBella Entertainment and fought more than I thought his presence in the boxing world has been rather obscure to this point. Conwell will fight this week off TV on Friday.

Money Powell IV back in action

The classy and talented middleweight will be back in action in fighting yet again in Paris, France, a place he has spent most of his career fight. Powell has a ton of power, so a memorable KO could happen in this one. Powell also sparred Jermall Charlo to get ready for this fight.

A former Felix Verdejo opponent, when the former prized lightweight made his HBO debut, will return in Florida, an area he has relocated to and found a promoter. Silva is the type of guy who could find himself fighting a prospect in the coming year, so it might be of use to gauge how he does or look over the performance. Silva fights on Saturday.