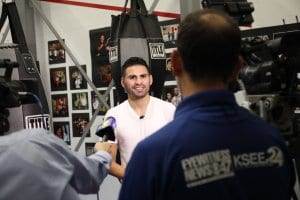 Ramirez gets crack at a world title

Jose Ramirez, the fighter from the same town of Avenal, CA, who became a 2012 U.S. Olympian, now will set his sights on a world title as he fights in New York City at The Theater in Madison Square Garden on March 17th.

Ramirez who faces Amir Imam for the WBC super lightweight world title will have his hands full as the terrific Fresno-based ticket seller will face one of the hardest punchers, Imam, in the division, who has a hellacious right hand that can relieve anyone from their senses.

Ramirez, who might be the fastest starter in boxing will face a fighter in Imam who doesn’t like pressure but has great straight punches with a strong jab and fight-ending right hand.

The bout serves as the ESPN main event this weekend from New York City is the biggest fight of the weekend, which will air at 5 PM PST on the west coast.

For Ramirez fans who can not travel to the east coast, Team Ramirez will be holding an event at Dave and Busters in Fresno, CA for people wanting to watch the event in group setting.

Last round, last sparring with two whippets keeping me sharp and on the ball with regular changes!! Thanks boys @lucienreidy @cedwardsboxing ????

Conlan, The Nail appear on TV

Michael Conlan left America and now trains with legendary trainer, Adam Booth. Conlan, who has been harshly judged by his professional performances for having tough outings in developmental fights despite recording four stoppage wins in five fights. Conlan, who is best known for getting an unfavorable nod in the Olympic Games of 2016, is now worked his way up in the professional game as he hopes to make more waves with a large amount of attention he has garnered.

Conlan looks to move up into the next caliber of foe in a television swing bout.

The co-main event of the telecast will see Oleksandr “The Nail” Gvozdyk take on Mehdi Amari for the interim WBC light heavyweight title with the actual belt being held by Adonis Stevenson currently. The fight should see Gvozdyk win a title in impressive fashion as Amari has lost to world-class competition whenever stepping up to that level. The bigger question is how Gvozdyk wins as he has been dropped and rocked in previous fights.

Where in the world is Felix Verdejo?

One-time believed future star of the sport of boxing, lightweight Felix Verdejo, now is seemingly anonymous and fighting on the undercard of this weekend’s New York card. The fight which will be broadcast online via the ESPN App will not garner nearly the luster, Verdejo once had. It is now up to Verdejo to earn his way back as time is not on his side anymore.

Back at it again let’s get it March 17th in MSG Dream chasing, catching all my goals on a mission ‼️@nsboxing @gonzalezhernandez6912 #teamchocolatito #wallstreet #bitcoin #harlem

A fight that is flying under the radar is super bantamweight Jose Gonzalez taking on Adan Gonzales, which is a rematch of their December bout in New York, in which the two battled to a draw in a very competitive and entertaining bout. Gonzalez who is signed to Top Rank Inc, is looking to move on from the close fight as Gonzales is looking to upset the prospect and make noise in the division.

I’d watch for results from this bout as it is matched fairly.

Christopher “Pitufo” Diaz will be back in action in a stay-busy type fight as he looks to get a marquee fight in the near future with say an Andy Vences or maybe even Erick De Leon, now that Oscar Valdez is out of the picture with a broken jaw.

Jose Pedraza makes his debut on the same card as fellow Puerto Rican, Verdejo, and at the same weight class. Could Verdejo versus Pedraza be in the works for later this year?

Also, very good amateur and solid professional Joseph Adorno will be in action and is a worthy watch as he has the talent and power to be a star. 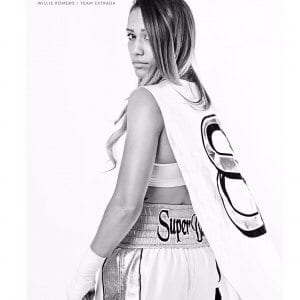 The attractive and talented Seniesa Estrada will make her Golden Boy Promotions debut as a signed fighter headlining an “LA Fight Club” card based around her. Estrada has fought for Golden Boy prior, but not as a signed fighter. Estrada will look to make for an entertaining affair and petition for a Marlen Esparza fight which is the bout that many thought would happen sooner rather than once she was signed as well.

Antonio Orozco didn’t even bother showing up to the weigh-in for his last bout and now is returning off television of a smaller Golden Boy Promotions show. It’ll be interesting to see where Orozco is at in his career after that incident. Prior to his odd weigh-in encounter, Orozco picked up the biggest win of his career stopping KeAndre Gibson in four rounds in April of last year. Orozco is returning nearly a year later.

A fighter many are high on Edger Valerio will return after fighting fairly recently. Valerio is your traditional come forward Mexican fighter, who rips combinations and punches to the body well, but sometimes gives up his defense for offense.

‪Get to know the #RockinFights 30 card set to go down this #Friday @TheParamountNY featuring the Brooklyn vs Bronx showdown of @ringmaestro vs @paputomartinez in the main event ?‬ ‪? LINK IN BIO

The three fighters at the top of the card are all rebuilding as Pennington recently lost to Pat Day, Gonzalez lost to Danny O’Connor in his last bout and Titus Williams lost to Chris Colbert. All of the fighters are talented and should end-up in some sort of fight in the future.

At only fourteen fights and with one loss, Sammy Valentin is currently ranked #12 in the WBO welterweight rankings. Roberto Arriaza has not fought much outside of his home of Nicaragua with only two of his fifteen wins coming in the United States. That being said, this is a solid Telemundo fight that will be viewed by few and cover by even less, but could create a welterweight fringe contender.

I want to wish Good luck to team @oscarvaldez56 tonight I was very great-full to be apart of his camp for this fight and he is ready to defend his belt ? #wargrounds

Michael Dutchover returns this Saturday at The DoubleTree Hotel in Ontario, CA. Dutchover, who is nicknamed “The Texas Tornado” will return to action. Dutchover is touted as one of the best fighters in the lower weight classes not getting much coverage

Battle of unbeaten in Washington

A very competitive fight in Washington will see undefeated super featherweight Ray Lampkin Jr. of Portland, Oregon taking on undefeated Giovanni Mioletti of Chicago, Illinois. The fight takes place at the Emerald Queen Casino in Tacoma, Washington as part of “The Battle at The Boat” series. The fight was put together by Andy Nance and should be an interesting bout between two boxers.

On a side note, it is interesting that Mioletti already has another fight booked for mere weeks after this one on April 14th.

I have been told Doheny is an interesting Irish boxer, who now resides in Australia and with an undefeated record. The super bantamweight has a perfect record, a 13 KOs in 18 fights and a decent following. Let’s see how he does.

This Saturday – March 17th Live on Pay Per View (24.99) from Boston . Murphys Boxing presents the Saint Patrick’s Day Clash 3 Featuring @dannyoconnorboxing_ 29-3 verse Canada’s Steve Clagget 26-4-1 , and co-featuring the IBF #1 ranked Super Bantamweight @tjdboxing 18-0 verse Mike Oliver 26-6-1  plus a 4 song acoustic set by the @dropkickmurphys . 8-10pm will be streamed free on Dropkick Murphys Facebook and Fight Nite Live Facebook and feature the first 3 bouts of the evening. Before switching to PPV from 10pm to 1am for the final 4 Bouts and DKM live. Buy online at FITE.TV or on the FITE app or contact your local cable and Dish network provider !!!! *available on Super Channel in Canada #dropkickmurphys #murphysboxing #boxing #boston #irishboxing #starboxing #intergratedPPV #superchannel #konightboxing #fitetv @murphysboxing @kendkm

Massachusetts favorite super lightweight Danny O’Connor will return to action on an St. Patrick’s Day themed event against veteran tough guy Steve Claggett in a battle of guys looking to get an opportunity in the future. The main event is competitive with O’Connor needing to make a statement for boxing to continue to be profitable for him at this point in his career.

For this interested former world champion, Sam Soliman is scheduled to be in action this week. I think it is safe to say that he will no longer look like his prime version of Soliman, but if you’re a fan of the fighter, he will be in action.

Christian Mijares will be having his last fight in Mexico this weekend. This like the fight listed above is more trivial than it is something to watch, but if you enjoyed the former world champion, Mijares’ career, you can catch him one last time this weekend.