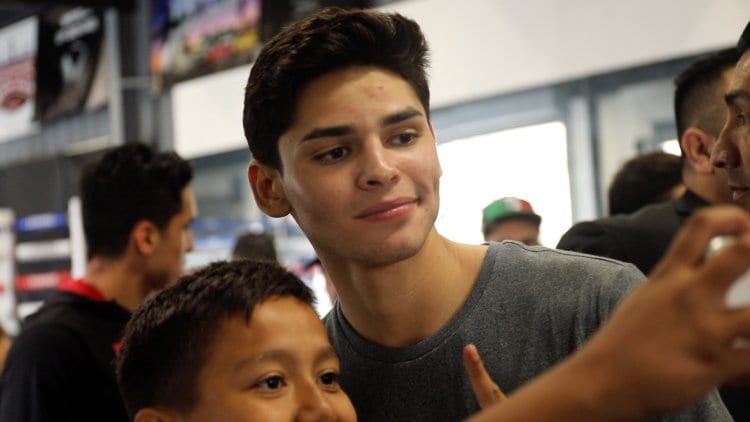 In the rare bit of boxing gossip that will fill this sheet, Saul “Canelo” Alvarez was temporarily suspended for two failed drug tests prior to his pay-per-view rematch with Gennady Golovkin on May 5th in Las Vegas, Nevada. Alvarez will find out what will happen to him on April 10th. Fight fans have one solid reason to be concerned as Golden Boy has yet to announce an undercard despite the card being a month away, which tells me they’re making sure the fight will continue as well.

“If you are what you say you are” – Ryan Garcia

Ryan Garcia, who entered the ring to Lupe Fiasco’s “Superstar” knocked out a severely overmatched opponent in Fernando Vargas, who was a former 122 lbs. contender fighting at 130 lbs past his prime. Despite all of that, Garcia knocked him out in spectacular fashion via first-round knockout. Garcia, a model looking teenage from Victorville, CA who you would be hard-pressed to believe was a boxer if you didn’t see his work in the ring, was too quick and powerful for his journeyman opponent.

It was also interesting to note that Garcia got a spot on ESPN and not ESPN2, something rarely any other Golden Boy card has gotten since Top Rank moved over to ESPN.

The next question emerges who will Garcia face next? The logical next move would be a fighter like Yuriorkis Gamboa, a game veteran who could give Garcia a lot of problems but might be a little past his prime, but questions emerge if Golden Boy might rush him into contention for a title shot.

A highly touted Golden Boy Promotions prospect in Emilio Sanchez suffered a surprise KO loss to Eugene Lagos in the very first bout on Thursday night, which was only watchable on the ESPN app or via their website. Lagos, a largely unknown Filipino fighter showed a great acumen for counter punching as a well-timed counter right hand ended the bout in the second round. It felt like Sanchez was too eager to engage and as he was caught coming inside without engaging first.

Other ramblings from Thursday card

Raul Curiel picked up a KO win that I only say in the form of a gif on the internet, Curiel is a six round fighter in only his third fight.

Aaron McKenna looked solid, but still like a bit like an amateur as he stands very upright at times, but still got a KO win in the first round on Golden Boy’s card.

Joet Gonzalez showed poise to withstand a strong start from his opponent and only to stop him once his opponent tired out. Gonzalez got the stoppage win in the fifth round.

Big Al Entertainment put on their second card from the Tower Theatre in Fresno, CA, headlined by Fresno, CA’s own super featherweight Jose Salinas (4-0 1KO), who is trained by world-famous boxing trainer Joel Diaz. Salinas picked up a split decision win over veteran tough guy Mario Aguirre (2-12 2KOs) in the four-round bout. Salinas, who was fighting above his weight class for this bout commanded the early action but seemed to slow a bit by the size of Aguirre in the third only to regain composure and win the final round as well.

After the fight, Salinas and his coach were pleased with the performance stating that Salinas fought a much bigger fighter and stuck to the gameplan in the ring. Salinas appears to be the local promoters marquee fighter, who they seek to promote and have on shows consistently in the Fresno area.

The co-main event saw Eduardo Sanchez (1-0) outlast Jose Rodriguez (0-1) in a four-round action-packed bout. The bout was up in the air as Rodriguez appeared to outbox Sanchez, but couldn’t handle Sanchez’s power which would dramatically sway rounds. The most telling blow was when Sanchez dropped Rodriguez seconds before the final bell. If you can find this bout I highly recommend you watch it as it was a very fun fight to watch. (I have included the small clip I could find on the internet above)

Manuel Manzo (2-6-1 1KO) pulled off the biggest win of his career defeating Fresno prospect Ivan Varela (0-1) in a four-round fight. Manzo’s made a commitment to coming forward and Varela failed to get his respect early as the fight become unmanageable late as Manzo plodded forward to victory.

Heavyweight Ignacio Zambrano (2-1) got off the canvas in the first round to defeat Tamis Long (1-2) in the four-round opening bout. Zambrano now has won two fights in a row after starting his career by getting KOed by “Magic” Mike Russell in less than a minute. Zambrano is tentatively set to return on April 21st.

Jesus Sanchez and Cesar Lomeli bout was canceled over issues pertaining to weight that was unclear to this reporter. Both fighters showed up to the event but did not fight.

Young was dropped in round three and seemingly was never in the bout after being sent to the canvas.

Gaballo will look to unify in the future with Daniel Roman of Southern California, who holds the WBA bantamweight title.

Former world champion Juan Carlos Payano had to get off the canvas and fight as scrappy as possible to barely edge a game Mike Plania in the co-main event. Payano also missed weight at the initial weigh-in, I am not sure if he made the weight on the second weigh-in, but is interesting to note that weight was an issue for Payano.

It was not the best showing for Payano.

Jose Martinez seemingly was a gifted a draw against Alejandro Santiago that headlined Saturday’s ESPN NABO Super Flyweight Title in Martinez’s home country of Puerto Rico. As I stated before in the preview Martinez has failed to stand-out to me prior to this fight and this fight left nothing of note other than this might be the level he will be at unless he makes dramatic changes to his game.

What makes the verdict worse was this was a rematch of a bout from roughly two years ago with the same outcome, a draw and with many pundits jumping to the assumption that the same thing had happened prior, though to be honest, I didn’t see that bout so I can not comment on it. Nonetheless, it was a competitive fight.

Lucas Fernandez came out of obscurity to beat one of Golden Boy Promotions prized prospects, a phrase I feel I type far too often, as super flyweight Joshua “The Professor” Franco was stopped in the ninth round in Puerto Rico. Fernandez traded with Franco, who was willing to bang with him, but got into a fight he couldn’t get out of. Franco made a strong rally especially in the eighth round, but was hurt in the ninth and in an odd sequence of events that will be debate for years the referee jumped in and stopped the fight.

Franco, a Robert Garcia Boxing Academy fighter was hurt with an overhand right and then dropped his down after a left hook as he appeared unresponsive on television and not putting up any form of defense as the referee called the fight. Immediately Franco’s coach, Robert Garcia, protested the stoppage, what do y’all think of the stoppage?

Welterweight Danielito Zorrilla picked up his first decision win against Clifford Grey albeit not without trying to stop Grey as he sent him to the canvas twice, once in round four as well as in round five.

Rashidi “Speedy” Ellis picked up a fourth-round technical knockout against an overmatched Fidel Munoz and favorite of ITRBoxing.com, Zachary Ochoa was unable to compete against his opponent on this card, though we’re not sure why.

In an odd battle between two heavyweights who had both failed drug tests in the past yet that was not at all talked about leading into the bout. It appeared that Lucas Browne’s first step-up in competition to the world level might have been a step too far. Whyte won every round convincingly, landed right hands at will against Browne and even cut him open in the very first round. Browne finally was brutally knocked out in the sixth round after being out 4-1 by Whyte up until that point.

Some after the fight blamed a long layoff on Browne’s performance, but I am not sure I completely agree as this is somewhat similar to what he had shown in the past just without the ability to dramatically change a fight with one big punch. Whyte, on the hand, separated himself from a top 10-ish heavyweight to now be an interesting dancing partner with someone outside of Anthony Joshua.

WOW! Callum Johnson beats Frank Buglioni by TKO inside the first round! ?

Johnson rattled Buglioni early on and dictated the fight from that point onwards.

Dillian Whyte v Lucas Browne is up next. Catch it on Sky Sports Main Event or follow it here: https://t.co/y4vuj0RnVE pic.twitter.com/dpB2V50rRi

Not just was it a bad fight for promoters we at ITRBoxing.com almost feel like we promoted or wrote about the wrong fighters to get you ready for leading into the week as Callum Johnson stopped Frank Buglioni in the first round of their fight. Buglioni, a lovable local draw, was caught clean and though he never went down was clearly unresponsive and out on his feet as the bout was waived off. This was a solid win for Johnson.

Heavyweight Dereck Chisora picked up a win on the undercard as well in a stay-busy fight. The bout only went two rounds before Chisora got the KO, it is obvious Chisora is trying to get one last big fight in the U.K.

WBA women’s minimumweight title Anabel Ortiz defended her title against Debora Rengifoin in Mexico as she essentially won every single round of the fight. The fight was broadcast on BeIN Sports.

Tyron Zeuge is quietly making a case for himself as being mentioned among the top ten in the world in super middleweight as he stopped Isaac Ekpo in two rounds. Previously, the two had a hard-fought bout, but the bout had gone to the cards in the fifth round due to a cut. This time Zeuge made an emphatic statement stopping Ekpo in two rounds.

The WBA cruiserweight championship now belongs to Arsen Goulamirian, the Armenian cruiserweight who resides in France, but trains in Big Bear Lake, CA with Abel Sanchez who stopped Ryad Merhy in the eleventh round of their scheduled twelve round bout.

Michel Soro continued his lineage of defeating unbeaten or highly touted fighters as he got a unanimous decision over John Vera in France for the interim WBA super welterweight title.