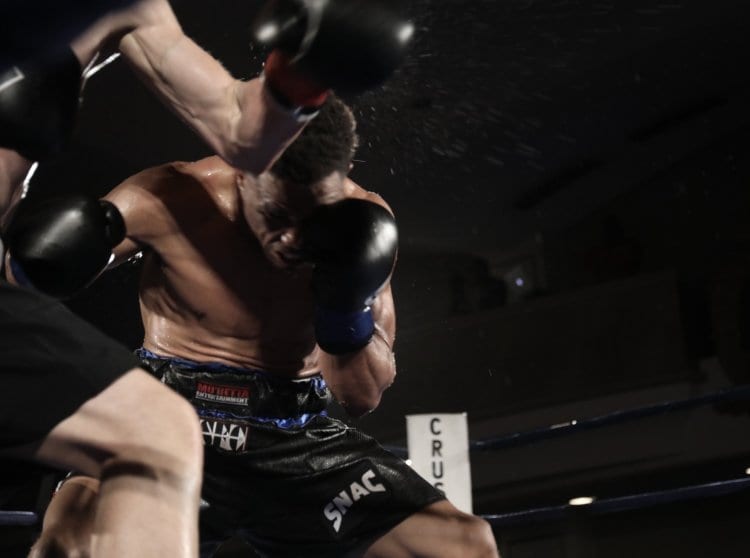 Karim Mayfield wins in S.F., Thurman in his future? 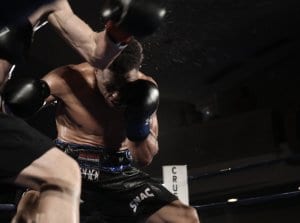 Mayfield, who was fighting with a heavy heart started strong nearly stopping Takahashi in the first round, but Takahashi had a good jab and came to win and made the fight interesting late as Takahashi never stopped coming forward.

After the fight, Mayfield dedicated the bout to his brother Sahleem Tindle, who was killed by BART police earlier this year.

An interesting fight that could potentially make sense for both parties would be a fight with WBA & WBC welterweight champion Keith Thurman, who is looking to come back after multiple injuries. Mayfield, a tough and game fighter might be the perfect fight for Thurman as the two make for intriguing styles clash and also would allow Thurman to return to the ring against an opponent who is not a current champion

Proud of my boy @boxing_boi5 he outboxed his opponent for 6 rounds and frustrated him into the TKO!!!! He stayed compose and boxed didn't let his opponent get in his head and turn it into a brawl, stayed a PROFESSIONAL the whole way!!!! Fought a very tough southpaw with a crazy chin on him!!!! #boxing #boxeo #health #fitness #fit #fitlife #mitts #mittwork #pads #padwork #sanfrancisco #bayarea #boxinghype #boxinglife #mma #mmalife #fighter #pro #mayweather #escobarboxing #manoplas

In the co-main event, super lightweight Willie “The Thrill” Shaw Jr. (6-0 5KOs) stopped southpaw Sean Gee (4-8). Shaw showed off a bit of everything that he can do using distance, speed and angles to land the right hand at will. The middle of the fight saw Shaw decided to fight on the inside, which didn’t seem practical seeing as he was having so much success from the outside. Shaw, nonetheless got a sixth-round TKO stoppage when Gee dropped his hands and took five straight punches unanswered in a manner like Ricardo Mayorga did in some of his fights, the ref called bout when this happened.

#teampinell represented last night. Thank you to everyone that came out and supported a great night of boxing. S/O #hardhittapromotions for putting a great show together in San Francisco.

San Francisco middleweight Ricardo Pinell (16-3-1 9KOs) picked up a second-round TKO over Enrique Gallegos (7-7-1 2KOs). Pinell dropped Gallegos in the first round and stopped him in the second.

Junior welterweight Lennard Davis IV (2-1-3 1KO) got the first knockout of his career as he stopped Julio Rizo in a very entertaining fight. Both Davis and Rizo stunned each other before Davis caught Rizo in an exchange and stopped him on the ropes with only seconds left in the 2nd round.

In the opening bout, cruiserweight, Andres Salas stopped Tamis Long in a little over a minute. Salas swarmed Long and never stopped throwing punches as the cruiserweight was trapped in the corner with nothing to do.

Romualdo “R.J.” Magayanes was unable to compete because his opponent had issues prior to the bout.

I was told the fight was a complete sell-out.

Hurd is an unconventional boxer, one who at times seems to struggle to stay on balance with his jab and is not going to outbox any one opponent. The winning formula for Hurd though is his work ethic as Hurd comes in massive for the weight class seemingly winning all of his fights in the gym to make the 154 lbs. limit. Hurd comes forward and applies pressure and so far, no one has been able to withstand it.

I laughed at the notion that he had been facing tougher opposition than Lara in the lead-up to the fight, but in hindsight it is true and in all honesty, he might now have a better resume than Lara with wins over Tony Harrison, Austin Trout and Erislandy Lara in three consecutive bouts.

Lara, who fought a very good fight, was unable to make the final adjustment in rounds ten, eleven and twelve that would have won him the fight and this was mainly because he just couldn’t keep Hurd away from him.

Hurd is now looking to unify once again with WBC super welterweight champion Jermell Charlo, one of the most talked about fighters in this division for what he does both inside and outside the ring.

Back where she belongs ? #2time #Redemption

James DeGale is now a two-time world champion as he defeated Caleb Truax to win the IBF super middleweight title back from Truax, who took the title from him late last year. DeGale though didn’t win any new fans and Truax will probably not hear cries for a rubber match as the bout was competitive but lacked either fighter taking chances. DeGale inched ahead and got by on what he needed to.

In the lead-up to the bout, DeGale essentially called Truax a journeyman and said he would retire if he couldn’t beat him. This victory means if nothing else, DeGale is still an active fighter and more than likely headed to a big rematch down the road with an old foe, George Groves.

Don't ever question my chin or my ? they both made of steel ??

In a bout that was fueled by Nathaniel Gallimore’s trash talk, Julian “J-Rock” Williams picked ups majority decision win over Gallimore. Gallimore spent most of the fight week insulting Williams, mocking him and harassing him. The fight saw Gallimore have success at times, but the conditioning, as well as Williams overall skill level, proved too much.

With this win, Julian Williams is now the number one contender for Jarrett Hurd’s IBF super welterweight title.

What it’s all about baby. #boxing Pics by: Chris Farina

Sit yo ass down?? Got a 2nd round KO. I want to thank God for this victory. Without him nothing is possible. I would also like to thank @leonardellerbe and @floydmayweather for putting me on this card. #tmt #mayweatherpromotions #xaviermartinez #undefeated #lasvegas #hardrockcasino #916 #sacramento

Sacramento, CA’s Xavier Martinez picked up a second-round KO win. Martinez is signed to Mayweather Promotions and continues to prove to be a promising fighter.

In a surprising upset, Sharone Carter defeated undefeated Ahmed Mahmood on the undercard.

Chico, CA’s Ava Knight was originally suppose to fight on the card, but like her last bout, her opponent had issues and the bout fell through at the last minute.

Aaron Coley gets draw in Africa

Golden Boy Promotions’ developmental boxing series, LA Fight Club returned with 2012 Women’s flyweight U.S Olympian Marlen Esparza (5-0, 1 KO) of Houston, Texas, who trains in Hayward, CA by way of Virgil Hunter’s gym, stopped Laetiza Campana (2-5) of Philadelphia in three rounds Friday night at Belasco Theater in the LA Fight in the Boxeo Estelar on Estrella TV main event. Esparza was accurate and did what was needed to stop the fight as she busted her foes nose in the first round and her straight punches couldn’t miss their target. The bout was called to a halt eleven seconds into the third round, but could have been stopped in between rounds to be fair.

After the bout, Esparza pointed to Seniesa Estrada, who headlined the previous LA Fight Club, who was sitting ringside.

Esparza versus Estrada seemingly is the next bout Golden Boy will make as their state-run media outlets have amplified the match-up playing up the rivalry.

San Antonio’s super featherweight prospect Hector Tanajara (13-0, 5 KOs) won a unanimous decision over Hector Ambriz (12-5-1, 6 KOs) of Ensenada, Mexico in the co-feature bout. Tanajara won every round on all three judges card, but had to work for every minute of the bout as Ambriz proved a tough outing in a good developmental fight for a young fighter.  The judges had it 80-72 on all three cards, by the way.

In the opening bout, Jose Vargas (4-0, 3 KOs) got a first-round KO Jorge Careaga (1-2) with less than a minute passing in the opening round. historic Maywood Boxing Club and looks to make name for himself in the lower weights.

Friend of the website, Pablo “The Shark” Rubio Jr. was supposed to be on the card, but his opponent was scrapped last minute leaving him without an opponent. Very unforunate for the young fighter.

Super middleweight Brandon Robinson picked up an eight round decision over Oscar Riojas in Philly. Robinson floored Riojas in the first, but never came that close to ending the fight again and at times looked awkward. Robinson soundly won the fight, but got hit coming forward as at times he would start by leaning in too much seemingly looking to pull counter, but getting caught in the exchange.

In the co-feature, Vegas junior featherweight Raeese Aleem remained undefeated (11-0, 5 KOs) with an eight round unanimous decision win over DC’s Marcus Bates, 8-1-1, 7 KOs. Aleem floored Bates with a right hand in the first round and edged him in most of the other rounds. Yet Bates stayed competitive in the fight. Aleem, however, was just too sharp and consistent, and a bit further along in his development. After eight quality rounds, Aleem won by scores of 80-71 and 79-72 twice.

Aleem really impressed me with his punches in combination as well as his hand speed and instincts. Aleem is still very green at the next level, but shows promises in a lot of areas.

So where was the slip ?? @wbcboxing

From Helsinki, Finland the WBC female super featherweight champion and co-promoter of the show Eva Wahlstrom barely edged a majority decision to retained her title. We did not get to see the bout, but St Vil took to social media to express frustration as an apparent knockdown was ruled a slip.

Former Mexican world champion Jhonny Gonzalez returned to action get a wide twelve round decision to shake off some rust. After his win, he called out WBC super featherweight champion Miguel Berchelt.

The bout is an exciting one, but considering Berchelt nearly fought Cristian Mijares in his last bout, it is well beyond feasible.

Victory !!!! thanks for the support !! #TeamCISSOKHO #WeWill

Both fighters train in Hayward, CA at Virgil Hunter’s Gym.

Tyler McCreary gets first round KO

Roc Nation Sports super featherweight Tyler McCreary stopped Gustavo Molina in two rounds. McCreary is the top of the list of Roc Nation fighters looking to make a name for themselves.

Largely unknown Rodolfo Gomez Jr stopped Ricardo Mayorga in the eighth round of a fight in Texas. If this isn’t the end for the well past prime, aging veteran in Mayorga, I am not sure we will ever see the end.

Road warrior Lanardo Tyner who has spent the majority of his career giving young fighters hard fights and making sure they’re just as good as the promoters hope they are, won a regional title welterweight title in Michigan against Andre Byrd.

Tyner might be best known for knocking out Charles Hatley in one round in 2012.