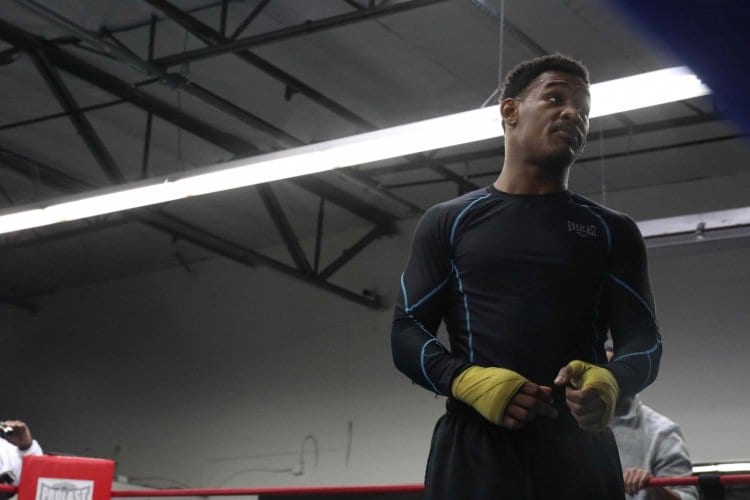 Issac Dogboe of Ghana, Africa stopped former WBO super bantamweight champion Jessie Magdaleno in the main event of a card that took place at the Liacouras Center in Philadelphia, Pa. Dogboe was dropped in the first round by Magdaleno. Dogboe exploited a right hand to the body which seemed to slow Magdaleno down. The tide of the fight was changed when Magdaleno was dropped in the fifth round, he would later be dropped twice in the eleventh round with the last knockdown causing the ref to waive the fight off.

The lead-up to the bout was filled with a lot of trash talk and bad blood that thankfully did not overshadow a worthy ESPN card.

In a battle of Philly, heavyweight Bryant Jennings outlasted Joey Dawejko in the co-main event of the televised card. Jennings seemed to have a bit more in the tank as he was able to potshot and move in the second half of the fight which allowed him to separate himself from Dawejko.

Jesse Hart also picked up a solid win despite an unpleasant finishing. Hart hurt Demond Nicholson in the first round, but was far too aggressive and couldn’t get a flush shot in to end the fight and Hart ended up getting rocked at the bell. Hart would drop Nicholson twice in the third round before what appeared to be a pushed ruled to be a knockdown ended the bout in the seventh when Nicholson complained instead of getting up and the ref waived the bout off.

Hart is hoping to get a rematch with Gilberto “Zurdo” Ramirez for the WBO super middleweight title.

2016 U.S. Olympic silver medalist Shakur Stevenson picked up a second-round TKO against previous undefeated Roxberg Riley. A lot of media have critiqued Stevenson heavily based on his pedigree which is very unfair since Stevenson has fought essentially against high-level fighters a young prospect who is being developed can face since his professional debut. Stevenson has never had the professional experience advantage as well as fighting durable opponents, who are no easy test for any prospect. Stevenson made quite the statement on Saturday night.

Power-punching Joseph Adorno continues to brutally stop his opponents and this bout was no different as he picked up a first-round KO which took place a little after a minute of the first round.

Bantamweight Christian Carto of Philly had the toughest fight of his career gutting out a win against Edwin Rodriguez. The scores were 78-74 and 77-75 on two cards. The fight appeared from the outside looking in to be a try out for the Top Rank, but we will see if Carto did enough to garner the attention of their matchmakers and the company at large.

Whether it might have been nerves from fighting in his hometown or just an odd night, but middleweight Daniel Jacobs looked very mortal against Maciej Sulecki in the main event of HBO televised fight card from Brooklyn, New York. The overall feeling coming away from the main event was a surprise as Sulecki was moving up from a lower weight class to face Jacobs who is viewed as a top 5 middleweight. Jacobs, who came on strong in the second half of the fight dropping Sulecki late, seemed to follow a trend set in his last fight in which the performance looked incomplete in parts as with Jacobs being considered for Gennady Golovkin, Canelo Alvarez and Jermall Charlo, one was expecting a statement with his performance.

Jarell “Big Baby” Miller, one of the more interesting modern heavyweight who has the gift of gab and the relentless pressure of Jarrett Hurd combined in one will face a former, picked up a 12-round decision over Johann Duahapes. After the bout, Miller hinted wanting to fight Anthony Joshua next, which more than likely is what is going to happen.

2012 Irish gold medalist Olympian Katie Taylor now holds the WBA and IBF women’s lightweight titles as she dominated Victoria Bustos in a bout right before the televised promotion of the card in North America.

Welterweight Josesito Lopez is refusing to go away as he outpointed Miguel Cruz in El Paso, Texas. The bout was Cruz’s first step-up to the world level of boxing competition and it appeared too much at the present time as Lopez not just lost the fight, but also lost multiple points after Cruz threw low blow that forced the referee to take two points from the fighter.

Lopez now is in position to get another big money fight after fending off prospect looking to get his spot.

Anthony Dirrell picked up a ten-round decision over Abie Han. Dirrell dropped the former prospect Han in the first round, but then shook off some ring rust and got wide decision over Han.

Turnabout is fair play as in the blink of an eye Claudio Marrero stopped Jorge Lara in the very first round at roughly 30 seconds. Jorge Lara had last been seen in action Fox stopping Fernando Montiel in a similar manner with a first-round brutal stoppage, the veteran Marrero stayed composed and caught Lara in an exchange using Lara’s power against himself as Lara could not get up from the shot.

In a bout that I was eagerly awaiting junior welterweight Kevin Watts has garnered new life to his career as he picked up a fifth-round TKO over a staple of the PBC developmental series Ryan “Cowboy” Karl.

Junior middleweight Ericsson Lubin will return for the first after being brutally knocked out in the first-round against Jermell Charlo last October as he picked up a dominant fourth round TKO victory in his bounce back fight.

Giovanni Santillan picked up his WBO NABO welterweight title by stopping Alejandro Barboza in two rounds. Santillian is trying to position himself into a world title fight after consistent solid performances

Bantamweight Saul Sanchez picked up a tactical six round decision over Sam Rodriguez essentially outboxing his foe for six rounds. Lightweight George Acosta picked up a second round knockout over Bryan Tovar also on the undercard.

Santana and Solomon will now face in the semi-finals with Solomon appearing to be the favorite to win the tournament at this given time.

Chris van Heerden and Fredrick Lawson picked up dominate victories on the other half of the bracket of the welterweight tournament and will face each other in the next round. Both Van Heerden and Lawson are skilled boxer who should make for a competitive chess match

Sergey Lubkovich gets a questionable decision over San Francisco, CA’s Karim Mayfield, the fight didn’t see a lot of clean punches landing, but the ones that did appeared to come from Mayfield. Nonetheless, the five, yes five judges ringside split the decision in favor of the Russian fighter who is now an alternate if a fighter gets hurt in the tournament.

Janelson Bocachica of Detroit, a powerful junior middleweight got a first-round knockout and most notable mocked his opponent who laying out cold on the canvas. Janelson’s father, Nelson Figureoa who also trains super featherweight Erick De Leon. Women’s junior lightweight Alycia Baumgardner who the promotion has high hopes for picked up a split decision win. I didn’t agree with the cards as I thought Baumgardner won most of the rounds through speed and distance. Also, decorated amateur, cruiserweight Joshua Temple picked up a devastating first-round knockout.

Lejarraga is a power-punching welterweight, who is largely unproven brutally stopped Bradley Skeete in Spain. Lejarraga dropped Skeete three times in the second round with the final knockdown causing the corner to throw the towel in.