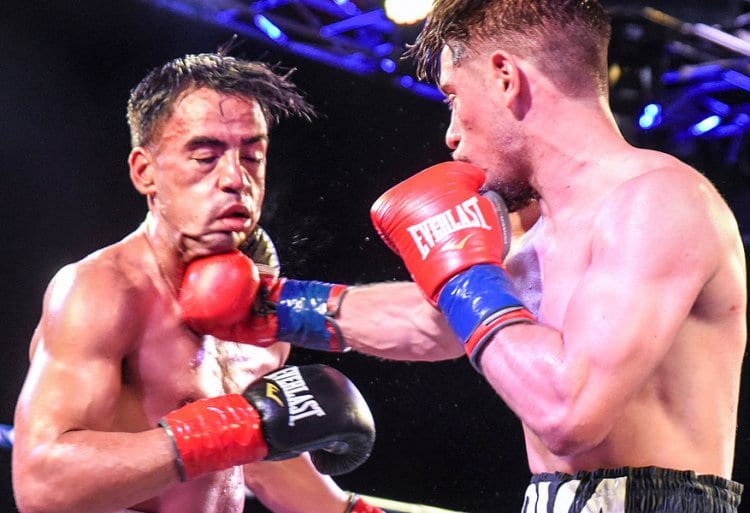 Featherweight Ruben Villa of Salinas, CA picked a dominant and violent sixth-round technical knockout in Sacramento, Ca. Villa, a fully faceted fighter who can fight on the inside and the outside, with some of the fastest foot speed in the sport of boxing currently. The blue-chip prospect, Villa is Banner Boxing and Thompson Boxing’s brightest young star and a fighter.

Villa is staying incredibly active and getting closer and closer to fight for a title. The only real question is; when will he use the nickname of “Drac” instead of RV4 in the pros.

Things were contentious as Mitchell considered Hernandez a friend and also found it offensive that he would take a fight with him. In a fight that I saw as a draw, the majority saw Hernandez outworking Mitchell when they were in close, the fact of the matter was it was clumsy and awkward. Not much happened as it appeared both were fighting off emotion and looking to prove a point as opposed to boxing. Jabs were thrown out the window as the fight took place in close quarters with Hernandez picking up the split decision win.

Light heavyweight Ryan “The Rhino” Bourland of Vallejo, CA started the night’s action off right with a decision win. Bourland lost his mother this week and battled emotions during the week to make it fight night. This was a big win for him given the circumstances.

WBU cruiserweight champion Blake “The Beast” McKernan of Sacramento, CA won once again against Miguel Cubos in a competitive affair.

Lightweight Pedro Moreno of Sacramento, CA picked up a six-round decision over Luis Zarazua in an eight-round bout.

Alberto Torres of Sacramento, CA  as well as super lightweight Maximiliano Becerra both picked up decision wins on the undercard.