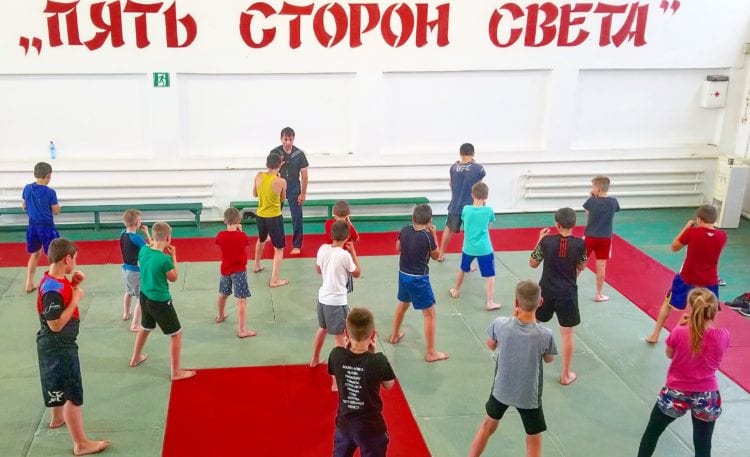 I have made the trip to Dagestan, Russia,

to visit the most prominent Shaolin outside of China. Nestled in the Caucasus Mountains of Russia, “Dagestan”, literally translates to “land of the mountains”. The temperatures there are mild, and access to the ocean gives this land a similar feel to that of the Central California coast. Dagestan is a Muslim majority region, and decades of tension with the Russian state have led to civil war in the past. Dagestan’s tumultuous history has bred warriors out of necessity. Today, the region produces more terrorists per capita than anywhere else in the world. But at the same time, this fighting culture has produced some of the finest combat sports stars, most notably Khabib Nurmagomedov of UFC fame. It is here, in Dagestan, that Gusein Magomaev, a Shaolin master, and his wife ,Olga Magomaeva, teach young men the secrets of Wushu Sanda, otherwise known as Kung Fu.

Magomaev is a mystic of sorts.

His Shaolin, named the Five Directions of the World, refers to a cosmic fifth direction which can only be accessed by the joining of the four cardinal directions (north, south, east, and west). This name holds a profound significance to the Shaolin, as Gusein not only trains his pupils to become Kung Fu champions, but he also teaches his pupils the virtues of math, science, world languages, and fine arts. Gusein believes that such an education and appreciation for the world outside of Dagestan is crucial for the fight against terrorism and for the human spirit. People who access the fifth direction are kinder, more patient, and more spiritually developed, according to Gusein. These humanistic values embedded within Kung Fu’s profound philosophy, allow the master to break through to his students.

Often considered one of the most prestigious secondary schools in all of Russia, the school educates three hundred students every year. The Five Directions of the World has produced more Russian and European Kung Fu champions than any other school, and has also produced Olympic gold medalists as well as the first non-Chinese King of Kung Fu, Muslim Salikhov.

For obvious reasons, Dagestan (officially known as the Republic of Dagestan) has long been regarded as a pariah state in Russia. A neighbor to Chechnya, Dagestan sends more terrorists to fight for ISIS than any other region of the world. Travel guides discourage people from visiting this often misunderstood part of the world, citing it as too dangerous. In recent times, however, Russian President Vladimir Putin’s renewed focus on the region has stabilized the tempestuous nature of area.

While no mention of President Putin was ever made during my visit to The Five Directions of the World, the Russian President’s affinity for martial arts is widely known. Russia, of course, has taken an active military role in defeating ISIS in Syria. But at home, Gusein Magomaev has taken an active role in defeating ISIS, not with the sword, but through philosophy, sport, and the ultimate humanistic concept of decency–all of which Mr. Putin must certainly be proud of.