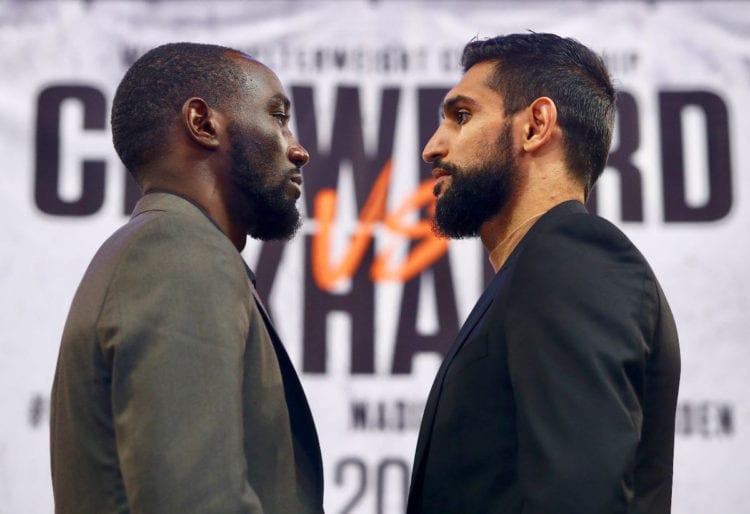 The time for talking is over. Terence “Bud” Crawford is ready for business.

Three days away from the Garden Party, this is what Crawford, Khan and their trainers had to say.

“I don’t believe no fight that I fight is just another fight for me. I believe that all fights that I fight from here on out are for my legacy. That’s why I want the biggest fights out there. Amir Khan’s name came up because he was the next best welterweight in the division. I could’ve easily took {Luis} Collazo. He could’ve took another fight with Kell Brook. I could’ve took Collazo, but that wasn’t the job that I really wanted to take. Amir Khan is a great fighter. I can’t take nothing away from. He’s done a lot in the sport of boxing. He has a big name. He’s undefeated at the welterweight division. So why not take another step up?

On not getting the credit for beating certain opponents

“Sometimes it bothers me, but that just shows how dominant I am. When you got undefeated gold medalists and world champions, where before the fight a lot of writers and fans think that they’re going to steamroll me or they’re too big for me, and this is going to be the toughest fight of my career. After the fight, they say, ‘He wasn’t that good,’ or ‘he was a stand-up fighter,’ or ‘he was slow,’ or ‘we knew you were going to do this, we just had to hype up the fight.’ So they discredit me. When you look at the fighters I’ve fought, most of them haven’t been the same after they’ve fought me.”

“I just want people to respect me for my talent and the skills that I have, and the willingness to go in there and fight any and everybody that’s available.”

“This {fight} ranks at the top for me because fighting a world champion, Terence is very high in the pound-for-pound rankings, maybe number one or number two. So, it’s just amazing for me to be in this position once again. That itself is a great motivation for me, to know that I’m fighting the best out there once again. And it makes me train harder, work harder and focus on this fight. I know that I can’t make any mistakes in this fight because I could be trouble. Terence, I’ve been watching all the videos of his fights. I see how he breaks down fighters, how he sees openings and stuff, and I can’t make those openings {easy for him}. Maybe my last performance got me this fight. To me, that wasn’t the best performance. That wasn’t the best Amir Khan. I’m now back with my old trainer, Virgil Hunter, where I’m happy and he trained me the best. And he knows me better than any trainer out there. We know we’ve done everything we have to do for this fight, and I’m going to be more than ready.”

“I’ve had some good fights in the welterweight division. We fought {Luis} Collazo. We fought {Devon} Alexander. {Virgil} has brought the best out of me. Even the Canelo fight was going well until I got caught with a shot. So, I mean, whereas this fight I’m fighting someone who is my own weight, which helps. Every fight with Virgil, I’ve learned something from, win or lose, and he’s brought the best out of me. I needed to get back with someone who could bring that respect back for the sport of boxing and also make me work harder.”

“This is a dream come true, and hopefully on Saturday, a dream will come true, where I get my opportunity to fight for another world title and be one of the best pound-for-pound fighters in the world. This just drives me, makes me work harder, train harder, stay focused. I know I have someone in front of me who is up there as number one. You can’t deny that. He’s a good fighter. I know he’s training hard because he doesn’t want to lose that unbeaten record, and I don’t want to lose this fight because I want to achieve everything I want in the sport of boxing.”

“I don’t have to talk about what the public is going to see from Terence Crawford. Anyone who knows anything in boxing knows a Terence Crawford comes along very seldom in a generation. I look at him {and the closest thing I can recall to him} is Sugar Ray Leonard. Terence reminds me of Sugar Ray Leonard. I’m not going to get into who would win if they fought each other because that ain’t gonna happen. Terence is really something special, and I’m so delighted that we’ve been able to arrange this fight against Khan, who I’ve always been an admirer of. Tremendous, tremendous fighter. I know Amir remembers the time I spent with his family when he was in Manny Pacquiao’s training camp. So I know what he brings to this party, and I am really looking forward to performances by two great fighters. A generational talent in Terence Crawford, and one of the great fighters I’ve seen in Amir Khan.”

“Amir had other opportunities he could’ve gone down, most notably probably the Kell Brook fight. But this is the fight that Amir wanted, and you have respect that and you have to respect a man who has done what he’s done in the sport, and I believe on Saturday night he’s going to go in there and do a job and become a world champion once again.”

“I think Amir, when he’s in with the best fighters, that’s when he looks the best. I think the test of Terence Crawford, taking on one of the best pound-for-pound fighters, one of the most respected fighters in the world, will bring him on. He has come back from those two fights {victories over Phil Lo Greco and Samuel Vargas}… I think as a welterweight, that’s the strongest weight for him, and I think it’s great having Virgil back in his corner. He had a great time with Joe Goossen, but I think being back with Virgil, who he’s been with for a very long time, is important to him.”

“It’s an honor to be across the ring from Virgil Hunter, and I will tell Virgil and everyone in the world that I’ll listen to him, as he {trained} Andre Ward and so many other fighters. As a student of the game, you go back and try to listen to the trainers and see what they tell their fighters in the corner… I’m glad Amir went back with Virgil Hunter because I don’t want him to have no excuses when Terence starts touching him.”

“It’s been a pleasure having Amir back. It came at the right time and a good time for a fight of this magnitude, to go up against a great fighter like Terence Crawford. As coaches, we live for these opportunities. Whether we win, whether we come up short, we thrive in these settings. It’s a great opportunity, and it’s a pleasure to be involved in this event.”

“He can’t have a mental lapse. He has to be focused every second of every round and be able to read the adjustments that a great fighter like Crawford will make. He’s {excellent} at making adjustments, and we have to be able to read those adjustments and adjust accordingly to stay competitive and try to win this fight.”
ESPN PPV, 9 p.m. EST/6 p.m. PST 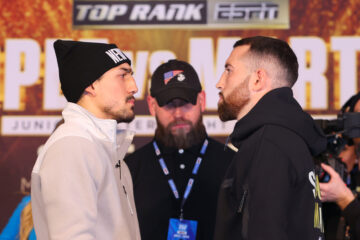