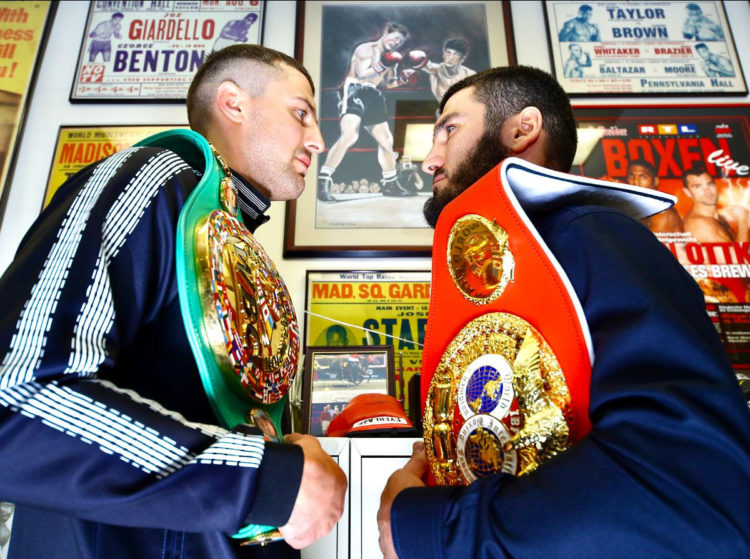 Beterbiev vs. Gzovdyk tonight on ESPN at 7 PM PST

Two of the most decorated current light heavyweights will face each other and unify two of the four major world titles in their respective division tonight at the Liacouras Center, Philadelphia, Pa, and broadcast nationally on ESPN.

So who are they?

Artur Beterbiev is the current IBF light heavyweight world champion and a decorated amateur, who hails from Russia, but moved to Montreal, Quebec, Canada, for his pro career training with Marc Ramsay. Beterbiev burst onto the professional scene when he beat former world title contender Tavoris Cloud in his sixth fight in 2014. The following year and two fight later he brutally stopped Gabriel Campillo after Campillo had just picked up a career resurgent win over Thomas “Top Dog” Williams Jr on ESPN2’s Friday Night Fights.

Beterbiev like a lot of decorated amateurs such as Demetrius Andrade has seen time off hurt his career as he faced long periods of inactivity in a promotional dispute against former promoter Yvon Michel before signing with Top Rank in late 2017.

Beterbiev was sporadically televised and never seemed to get traction prior to signing with Top Rank and since signing has begun to be featured in the main event and co-main event spots of marquee cards as well as guiding him to the IBF light heavyweight championship for the second time in his career.

“It was a difficult time, but I don’t want to talk about the past. I think the future is more happy. It’s hard when you have court and you have to train and be active. It’s hard, but I did that. Now, I have 100 percent time to focus on my fight and my career.” said Beterbiev about his past inactivity.

Beterbiev was a 2012 Olympian beating current heavyweight Michael Hunter and losing to Oleksandr Usyk, who some consider a current top-10 talent, in the year Usyk won the gold medal.

In fact, Beterbiev is a two-time Olympian making the team in both 2008 and 2012, and even beat Sergey Kovalev in 2007, as well. Beterbiev, in fact, seemed on track to win a medal in Beijing 2008 Olympics but lost a sketchy decision to Zhang Xiaoping, who ended up winning gold at that Olympics. Despite the accolades from Beterbiev’s amateur career, and a bruting style in which, he basically runs at opponents, throwing big power punches, Beterbiev hasn’t quite caught on. That being said, he also hasn’t had a true dancing partner yet, until tonight. This is Beterbiev’s first must-see-TV bout, of his career.

WBC light heavyweight world champion Oleksandr Gvozdyk is part of the Egis Klimas managed fighters from the Ukraine, who had a wealth of amateur bouts in the Vasyl Lomachenko vein. Gvozdyk has everything you want in a fighter, the power, the movement and the ability to get up and fight when hurt, just nothing has stood out to me as a pro except for Tommy Karpency dropping him, and Gvozdyk stopping Adonis Stevenson, which is the best win amongst Beterbiev and Gvozdyk combined.

This might not be fair, but despite having a good resume stopping Nadjib Mohammedi, Isaac Chilemba, Yunieski Gonzalez and Adonis Stevenson, Gvozdyk has flown under-the-radar until famed-coach and boxing personality Teddy Atlas became his coach. Atlas an encyclopedia of knowledge as well as a fantastic storyteller has brought more eyes and ears to Gvozdyk’s career than ever before in the past year.

Atlas has been a key to Gvozdyk’s transformation as Marco Contreras built a great professional foundation for Gvozdyk, but Atlas has brought the entertainment and the loyal fanbase following.

“Teddy is very picky, very particular, and this is what you need. Sometimes, you cannot right yourself. Sometimes, you think you’re too tired, sometimes you want to work more, but Teddy knows exactly what you’re supposed to do and there is no place for an argument. First of all, he is a good person because when I met him, I realized that. Like I’ve said a lot of times before, this type of person is already under extinction, probably even non-existent anymore. From his professional qualities, besides his qualities as a human being, he’s very smart, he has over 40 years in this business, and he never loses any small details, which is really important.” said Gvozdyk earlier this week, about his famed trainer.

Atlas shared his deep boxing philosophy that has garnered him so many loyal fans with his take on the upcoming fight that had everyone listening in the gym, and no one talking as he spoke.

The man in Beterbiev’s corner, Marc Ramsay was the polar opposite of Atlas in his soundbites, speaking concisely and to the point.

“We asked our management if we could have {unification} fights right away. This is what Artur wants, what I want as a trainer, and everybody wanted to go in this direction. I don’t know what happened behind the scenes, but I know it wasn’t very difficult looking back with this fight on the table. We said ‘yes’ right away, first day {it was offered}.” said Ramsay promptly.

Another storyline is the two fought in the amateurs though despite getting the better of it, Artur Beterbiev downplayed the importance of the past.

“I think it was two rounds. But I don’t know, I heard Gvozdyk say I broke his nose. I don’t know that. He said that. It was only two rounds.” said Beterbiev recalling the fight they had prior in the amateurs.

At the weigh-in, the boxers essentially mirrored each other, as both professionally made weight with Gvozdyk coming in at 174.3 lbs and Artur Beterbiev coming in at 174.5 lbs, a half-pound each under the 175 lbs championship limit.

The reason this bout matters, if you made it this far is simple.

This bout will create a star in the light heavyweight division as the winner of this fight will have the best current win in the division of any champion against active fighters. It is also a contrasting style as Gvozdyk is a boxer with good power, while Beterbiev is pure aggression with some technical aspects, but Beterbiev’s elite trait is power.

The big question is which fight was more telling? Was it when Gvozdyk got dropped by Karpency or was it when he outboxed Adonis Stevenson, who has similar attributes to Artur Beterbiev one could argue.

Beterbiev didn’t look good against Callum Johnson, was that astriks fight, or was that a troubling sign of how fights could go in the future? Against Enrico Koelling, Beterbiev had moments in which he was unable to cut off the ring, but that was after a lot of inactivity as he looked as good as ever against Radivoje Kalajdzic a/k/a “Hot Rod”, in Stockton, Ca, albeit Kalajdzic stated that he was on the fence about being a professional fighter leading up to the bout.

The big question for this fight is; who are these guys really, right now? A lot of geniuses will pipe in with “I told you so” after the fact, but this a fight in which neither fighters identity has been truly revealed, and this bout looks to help paint a better picture of each fighter.

The two do battle tonight, Friday, October 16th, in Philadelphia, on ESPN at 7 PM PST