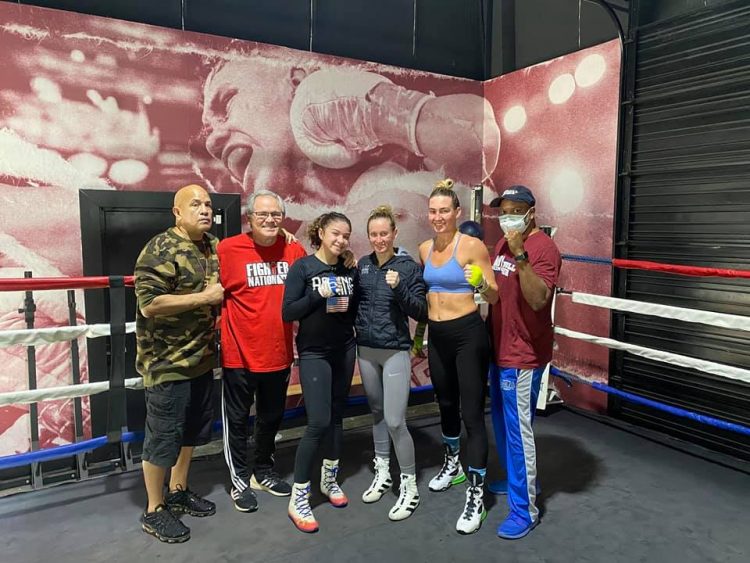 As you may know by now, Sierra Martinez is good at boxing.

The 2020 USA Boxing Women’s Boxer of the Year – Sierra Martinez, has been making some noise as of late, and 2021 is starting off at a sprinter’s pace, already for the emerging fighter.

Recently, the world-level amateur sparred 2021 Olympian Ginny Fuchs and WBO super featherweight world champion Mikaela Mayer as Martinez is prepping to continue her dominance in the amateurs, and sparring two of the very best to do it, ever, is one great step forward toward that goal.

In fact, Martinez is no stranger to facing the best, as she fought Fei Faiva, an unbeaten fighter, early in her amateur career. At the time, Faiva was widely believed to be one of the best emerging women’s boxers in the country and with ties to Cus D’Amato, the famed trainer, there is a lot to like from a story perspective.

“Fei Faiva I had fought her one time in [New] Jersey, and one time in Connecticut, and I beat her both times,” said the decorated amateur Martinez. “It meant a lot, because [a lot of people doubted me].”

Faiva, a feared amateur, who is now pro, saw many people around Martinez using unconfident language such as, ‘this will be a good experience’, rather than a depiction of belief that Martinez, would win the bout – and not unlike Teofimo Lopez, Martinez defied the odds, and against all odds won the fight.

In the last two nationals, Martinez has beaten Faith Mendez, twice, Isabel Vasquez, twice and has given Fei Faiva her only two losses ever. In that time she has been selected to be the boxer of the year by USA Boxing and Under Armour, the year prior.

When Martinez beat Alexa Kubicki, Martinez was essentially an opponent to a rising star of the sport in Canada, as Martinez at the time didn’t have much experience.

“So we went to Canada, and I stepped into the ring and everyone started whistling, and I am thinking ‘they’re whistling for us, like cheering’, but I later found out whistling is booing in Canada,” said Martinez. “So [the girl I fought] her dad was one of the promoters of the tournament, so I later found out he basically paid for the belt for her, and I was basically the opponent going in. So I was on the b-side, coming to lose, mind you, I am inexperienced, and she is already the national champion of Canada, and I only had ten fights at the time. So I box her, I box her beautiful, and it took twenty maybe thirty minutes to get the decision.”

Martinez finally won the belt, and the decision, but even as an inexperienced fighter, she got a taste of the tough business of boxing from an early point. As Martinez stated the in meant everything to her.

How’d the story start though?

Martinez began boxing, because of her father, Simon Martinez, who is her coach to this day.

“I was a chubby kid and my dad got me into boxing because of that,” said Martinez. “One day some girl came up to me [and said she wanted to spar]. So after a while my dad got the mouthpiece, and I had no fights, no sparring, no-nothing, and this girl had been in the game for three years, [and through that] my dad saw something in me, that I didn’t even see…”

The father-daughter relationship which is now stronger than ever has led to multiple national title wins and has Martinez being looked at as a serious threat to be an Olympian in 2024 if things continue on this path.

Martinez’s success also led to other great life experiences, namely sparring Jessica McCaskill, the ITRBoxing.com’s 2020 Women’s Boxer of the Year, for the bout that she beat long-reigning champion Cecilia Brækhus in this past year, 2020. Martinez was the chief-sparring partner, and even was there fight week, in the bubble with the McCaskill to see the performance.

What made it so special was how good McCaskill looked since, the burden of stress would be laid either upon McCaskill or Martinez, quite possible if McCaskill hadn’t have won or looked bad since it took strong conviction to have an amateur standout be your chief-sparring partner over a seasoned professional. Even being featured on Rick Ramos’, McCaskill’s coach, YouTube channel series “No Days Off”, shows how much transformation and confidence the young fighter, Martinez gained from that camp.

“I was so excited, especially when she actually won, I was like ‘oh, I was a part of that!,” said Martinez on reflecting on being in such a high-profile training camp.

Martinez is a self-driven fighter, who recently moved with her family from Rhode Island to the greater Texas area, as she is now being co-trained by the world-famous boxing trainer Paul Reyes, most known for his work with Donald Curry.

“What motivates me right now is the Olympics,” says Martinez who has her eyes set on the 2024 Olympic Games. “Once I think about fighters, I know I got to work, I can not slack, I have to work to get to the Olympics, and that is what I am going to do.”

Sierra Martinez is one of the most promising women boxers in the country, and we will be keeping you updated on her career moving forward.