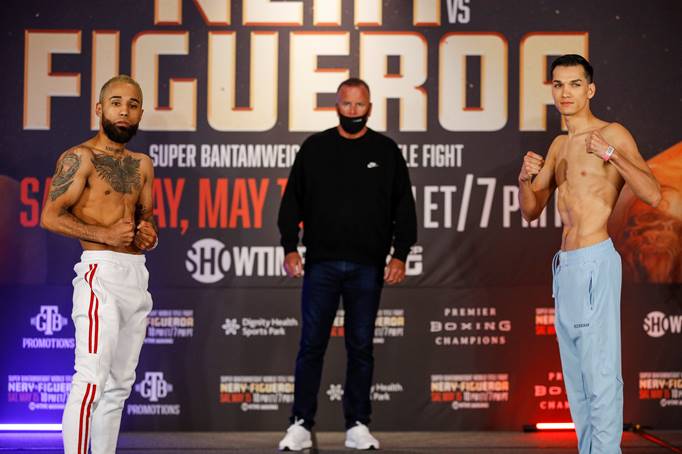 Brandon Figueroa has spent much of his career being “the other Figueroa brother”, as Omar Figueroa Jr., Brandon’s older brother struck fame and fortune in boxing becoming the WBC lightweight world champion in 2014, by defeating Nihito Arakawa for the WBC interim lightweight world title, and with Adrien Broner vacating that division, Omar would be elevated to world champion status, beating amateur sensation Jerry Belmontes in his first world title defense.

Now fast forward to 2021 as Omar Figueroa Jr.’s career seems to be at the crossroads after a loss on PPV, and his younger brother Brandon, nicknamed “The Heartbreaker”, based upon his good looks is looking to unify the titles in the super bantamweight division. Brandon currently holds the WBA super bantamweight title, one that he won the interim version of the belt against Javier Nicholas Chacon, only to be elevated to full champion, to make his first title defense against veteran Julio Ceja.

Figueroa’s second title defense was just as impressive defeating Damien Vazquez, a tough veteran who had been training in Las Vegas, Nevada, at Bones Adams’ Gym, as Figueroa stopped Vazquez in the tenth round.

For those unfamiliar with Brandon Figueroa’s boxing style, it is a style that only a young man could have. It is reckless, aggressive and full of energy. For those no longer youthful, you might think the same thing of the former version of yourself, and Figueroa personifies the style of taking one-to-give-one at this point in his career.

Now Figueroa faces the toughest fight of his career, Luis Nery, a two-division world champion, who is known for his power, aggression, and out-of-the-ring antics prior to his fights.

“I had what was probably one of the best training camps of my career. I’m more than ready for this fight. I feel like all of my advantages are going to be used Saturday night and I just can’t wait.” said Figueroa to the media earlier this week. “It’s going to be an exciting fight. If I’m this excited now, I can’t imagine what it’s like with the fans there. I’m willing to put it all on the line Saturday night.”

Nery, who held the WBC bantamweight title in 2017 after defeating Shinsuke Yamanaka, would defend the title only once before, losing his title on the scale in his rematch with Yamanaka, in a bout that Nery steamrolled Yamanaka and stopped him in two rounds.

Nery has had every issue imaginable that fighter can have, missing weight for multiple fights, a performance-enhancing drug test failure, leaving famed trainers such as Freddie Roach and Eddy Reynoso, and also got dropped in his bout with Arthur Villanueva. The issue is, when Nery is on, he is such an action-packed fighter, we look past all of the non-sense because he is a must-see-action fighter. Yet, that Nery hasn’t been seen since March of 2019 in his destruction of McJoe Arroyo – so does that Nery still exist over 2-years later?

Nery picked up a form of the WBC super bantamweight world title after defeating lesser-known Aaron Alameda, a solid fighter, but a fighter no one going into the bout thought was on Nery’s level, who gave Nery a respectable fight, but one that left fans wanting a bit more from Nery. After the bout, Eddy Reynoso, the famed coach of Canelo Alvarez was removed from the picture.

“I’m ready to fight anybody that will improve my legacy,” said Nery to the media “I want to keep winning and moving up divisions and putting together a resume that matches up with all of the legendary Mexican fighters.”

That being said, Nery was very quick off the scale today to rehydrate, as despite making the weight, at 122 lbs, with Brandon Figueroa coming in at 121.2 lbs, we still have more questions than answers, as Nery looked to feel every bit of the weight cut.

Brandon Figueroa has been brought up the slow way, and has an offense-first and make the defense work in the moment-style, and Nery at his best looks like a classic pressure fighter with power, but at his worst looks, uninspiring. In short, both fighters need this win to stand out in the division. With Nery serving as the future legend, who seemingly fell a bit of the rails and Figueroa looking to be a fighter is getting the most out of his fighting career.

Figueroa has major questions about Nery’s style at 122 lbs, and Nery is now with a new camp in Orange, California, as Nery is training out of the Real Boxing Champions Club, an emerging gym. It isn’t rocket science what Figueroa will do, but Nery will have no grace period with his new team, as it is clear he was unhappy with his previous performance against Alameda with a defense-first approach, and now Nery has the fight of his career with a new team, headlining a Showtime card.

Figueroa knows what is on the line, and part of that is being a marque fighter in the PBC universe.

“This game is all about proving yourself in and out of the ring. I feel like my hard work speaks for itself. My fights speak for themselves. I’m just glad I get to share the ring with Luis Nery,” said Figueroa. “I know he comes to win as well, but I don’t think he wants it as bad as I do. If it goes my way, Stephen Fulton is next and that’s a fight that I’ve been wanting for a long time. It’s time to unify. If that’s not what you come to boxing for, then what are you in boxing for?”

“Fulton is the fight I’ve been wanting. I know he’s been talking a lot. First of all, I need to get through Luis Nery. I just can’t wait for these big fights and these big names,” said Figueroa. “I’ve been trying to fight Fulton for a while and now it’s going to be made if everything goes well Saturday night. He’d be next and I can’t wait to put on a show again.”

To the victor goes the spoils, as two of the sports best at the 122-lbs, will face each other to see who will take the next steps towards becoming a star in the sport.

Nery vs. Figueroa will see the powerful two-division champion Nery pursue a signature win at super bantamweight, while the rising Figueroa looks to use his all-action style to earn a career-best victory and announce his presence amongst the boxing’s elite in a 12-round showdown live on SHOWTIME Saturday, May 15 from Dignity Health Sports Park in Carson, Calif. in a Premier Boxing Champions event. The winner of this fight will face WBO 122-pound champion Stephen Fulton, Jr. on September 11 on SHOWTIME in a unification showdown.