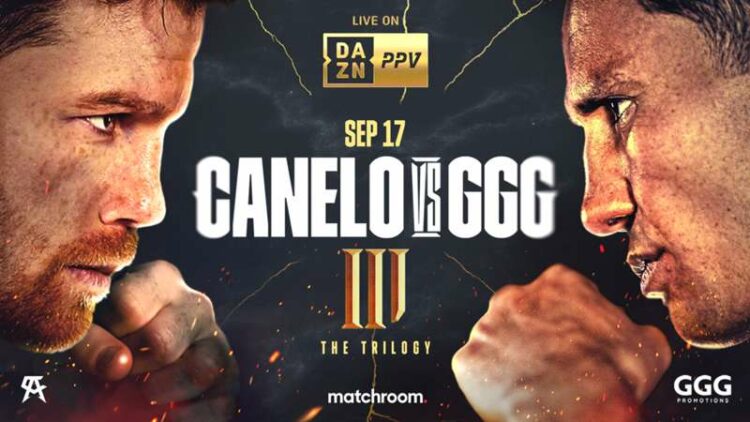 The undisputed super middleweight championship of the world is on the line this weekend, as Saul “Canelo” Alvarez (57-2-2, 39 KOs) returns to the 168lb division to defend his titles this Saturday night. He will defend those titles in his trilogy bout against heated rival and Unified Middleweight Champion Gennadiy Golovkin (42-1-1, 37 KOs). The first two fights between the pair took place in 2017 and 2018 and they were surrounded by controversy. The first fight took place September 16, 2017, and the result of that fight was a split decision draw. The public was unhappy with the result. Most boxing fans and media members believed that Golovkin did more than enough to be anointed the rightful winner. The rematch was originally set for May 5, 2018, but a pair of failed drug tests from Alvarez postponed the event. They eventually met on September 15, 2018 and it was another hard fought 12 round affair. Canelo was awarded the majority decision victory since he had much more success in the rematch and was able to stand his ground against the rugged Golovkin. That brings us to where we are today, approaching the trilogy fight four years after the rematch took place.

Canelo became the undisputed ruler of the 168lb division when he stopped Caleb Plant (21-1, 12 KOs) in round eleven of their November, 2021 fight. He challenged Dmitry Bivol (20-0, 11 KOs) for his WBA light heavyweight belt in May of this year, but was outclassed by the larger and more active Bivol who won via unanimous decision. Canelo then set his sights on a return to the division where he currently holds all the titles. Golovkin fought in April of this year, unifying titles in the middleweight division when he knocked out Ryota Murata (16-3, 13 KOs) and added Murata’s WBA title to his IBF title. Even though Golovkin got the victory, he showed that he is not the same fighter that he was in his prime. It took him a few rounds to get going, and he was susceptible to body shots from Murata early on. Golovkin, a career 160lber, will benefit from the move up to 168lbs. Not having to boil down a few extra pounds should help his punch resistance to body shots and help him feel stronger than he did at middleweight.

Both men have expressed their dislike for the other and are looking to cap off the trilogy with a statement victory that gives them the upper hand in the rivalry. Down below are predictions for the fight by members of the ITR Boxing staff, along with odds for the fight.

Predictions from the ITR Staff:

Jack Kelly (me): Due to the age of Golovkin, I have to favor Canelo in the trilogy. Canelo should be motivated coming off of a loss, and has made it known that this fight is personal for him. GGG started slow against Murata and is going to have to start fast if he wants a chance at victory in this one. I think that body punching will be the key for both fighters, and I think that Golovkin showed in the Derevyanchenko fight that he could be hurt with body shots. I believe the fight will be competitive early, but Canelo will eventually wear down the older Golovkin and stop him to the body in the late rounds.

Felix: This go around I am picking Canelo via second half stoppage. I think the wear and tear on Golovkin will be evident. I actually felt Canelo was getting close to a knockdown or at least a stoppage in their second bout. This time around, he has two chips on his shoulders. One, he wants to shut up the critics, fans, and Golovkin himself, much like Marquez when he faced Pacquiao. Secondly, he is going to try and erase the Bivol loss from everyone’s memory and end the year on a high note. It will be competitive and fun the first few rounds, but we will see a methodic breakdown of Golovkin over the course of the fight leading to the eventual stoppage.

Dakota: Generally speaking, I think the “Golovkin is washed up” narrative is overplayed. Mostly what I saw against Murata in the first 5 rounds was ring rust, and once G got a rhythm he looked like the Gennady we have always seen. In some ways I think Golovkin is the Marquez to Canelo’s Pacquiao. All that being said, he is 40 years old, and though he may not physically have eroded much, it’s hard to know how he will react to Canelo now, especially a hungry Canelo coming off a loss and a guy who has moved up two weight divisions already. I see a similar fight as the first two that’s slightly more dominant for Alvarez, with Canelo closing the show strong and winning an 8-4 kind of decision.

Lukie: I like Canelo. I think the fight will be close. Canelo struggles with a good jab, and I don’t see that changing. Still, I think between the politics of boxing and Golovkin’s age of 40-years-old, Canelo has the easier path to victory.

Nigel: I got Canelo by KO8. I think it’s a close fight up until Canelo catches GGG with something slick late. But I wouldn’t be surprised if the reverse happens in all honesty.

Ray: Canelo 7th rd. Gs lack of competition since Canelo will have him looking outclassed.

Canelo vs. Golovkin III Is Like Lethal Weapon 4, Here's Why...