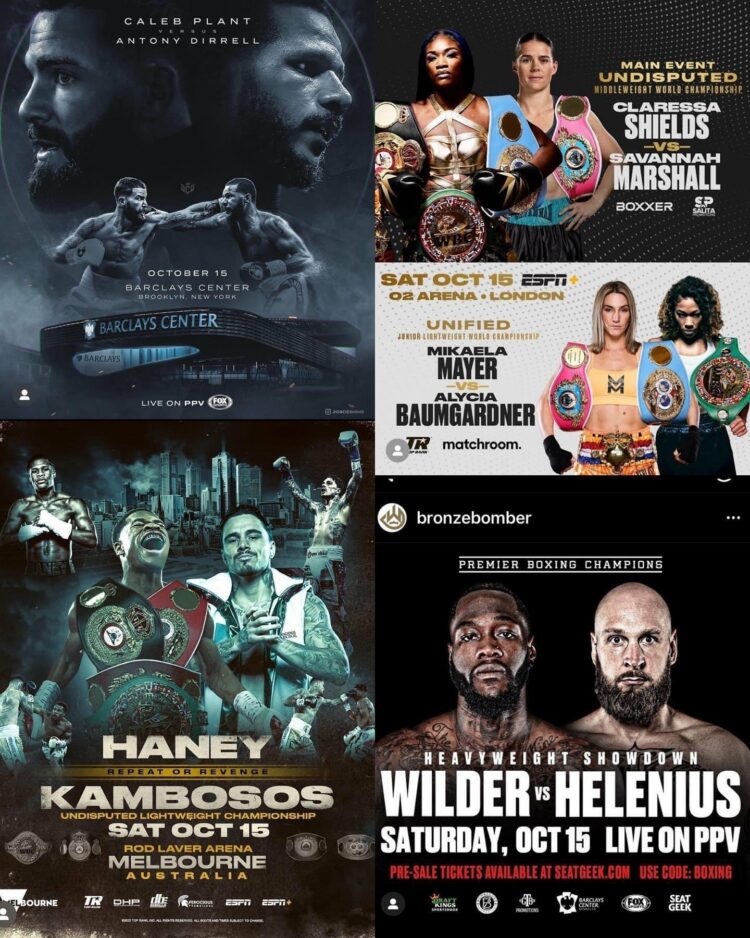 This Saturday boxing fans will be spoiled as there are a number of high level intriguing matchups. Overall, we have three title fights with a total of eleven championship belts on the line, along with a Fox Sports PPV that features the return of the hardest hitting puncher of the modern era. I will be providing the latest odds, along with giving my personal picks for each of this weekend’s marquee events.

Unified Middleweight Champion Claressa Shields will look to become a 3x undisputed champion and further prove her status as the “Greatest Women’s Boxer of All Time”. WBO Champ Savannah Marshall hopes to repeat her victory (highly controversial to say the least) over Shields in the amateurs years back, and take over as the face of women’s boxing. The odds for this fight are virtually 50/50, with some siding with the pedigree and boxing ability of Shields, and some favoring the power of Savannah Marshall. Marshall is a big puncher, and Shields will have to be on her game for all ten rounds. As long as she stays focused, I see her turning in a quality boxing performance and winning a decision. With the fight being in Marshall’s home country, you have to worry a bit about judging, but I believe Shields will box well enough where they are unable to take the victory from her.

My Pick: Claressa Shields by Decision (+105)

Out of all the fights that we have this weekend, this one is by far the hardest one for me to break down. Mikaela Mayer is the current unified champion and much like her former Olympic teammate, Claressa Shields, she has the pedigree and experience advantage over her opponent. Alycia Baumgardner was not a high profile amateur, yet she burst onto the scene last November when she knocked out Terri Harper and became the WBC Junior Lightweight Champion. Mayer will attempt to use her length and boxing skills to keep the fight at range, but as she showed when she unified titles against Maiva Hamadouche, she is not afraid of mixing it up at close range. The more this fight is contested at close range, the more I give Baumgardner a chance to land something big and potentially turn the tide in the fight. I have gone back and forth many times on who I think comes out victorious in this one, but I am backing the pedigree of Mayer to win a close and competitive decision in what I expect to be the fight of the weekend.

The rematch is on as newly minted Undisputed Lightweight Champion Devin Haney defends all of his titles against Former Champion George Kambosos Jr. The first fight was a masterclass by the young American, as Kambosos was left without an answer for the twelve round duration in front of his home country. Many expect the rematch to look similar to the first matchup, and it is on Kambosos to make adjustments and have more success during the second go around. Even if Kambosos comes out more aggressive in the rematch, I think that will lead to him getting countered more by Haney. I am anticipating another dominant showing by the youngest undisputed champion of the four belt era. Even if Kambosos makes successful adjustments, I don’t think it will be nearly enough to avenge the defeat and please his hometown fans.

The best American heavyweight of this generation is back! Deontay Wilder returns to the Barclays Center, where he has had a number of great moments throughout his career. In this PPV main event he is opposite “The Nordic Nightmare” Robert Helenius, who is actually a former sparring partner of Wilders. Helenius is coming off two consecutive stoppage victories over Polish Heavyweight Contender Adam Kownacki, which has put him in this spot for a marquee opportunity. There are questions surrounding which version of Deontay Wilder will we see come Saturday night, as he took a hellacious amount of punishment during his legendary trilogy with Tyson Fury. I believe that punch resistance will not be a problem here, and I am completely backing Wilder to return and add another devastating knockout to his historic count. I think the first few rounds will be won by Helenius, but once the mid rounds arrive he will be able to land his vaunted right hand and be victorious in his highly anticipated return.

Two former super middleweight champions meet in the co-main event of this weekend’s Fox Sports PPV. Caleb Plant is looking to rebound after suffering the first defeat of his pro career in his last fight, a late TKO loss to Undisputed Super Middleweight Champion Saul “Canelo” Alvarez. Dirrell was last in action on that undercard, scoring a knockout of the year candidate against Marcos Hernandez. Though I also view Plant as the favorite, I was caught off guard at how wide the odds actually were when they were released. Dirrell is a bit older as he will turn 38 tomorrow, and I agree with the oddsmakers that the overall boxing ability of Plant is most likely too much for Dirrell to deal with. I think that the warrior spirit of Dirrell will keep him in the fight; and if he is able to hurt Plant later in the fight, he could have a chance of pulling off the upset. With that being said, I am backing Plant to win by unanimous decision and get himself back in the title picture at 168lbs.

Other Fights with Plays to Consider: