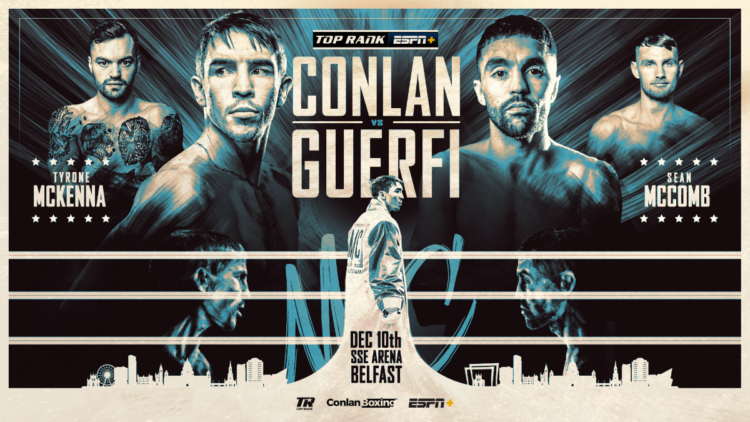 Conlan (17-1, 8 KOs) returns for his second Belfast block party since his valiant challenge of WBA featherweight champion Leigh Wood in March. The two-time Irish Olympian was leading on the scorecards before being knocked out in the 12th round. In August, he returned to his winning ways with a one-sided decision over three-time world title challenger Miguel Marriaga at The SSE Arena. Guerfi (31-6, 9 KOs), from Manosque, France, is a former two-division European champion coming off a decision win over Mexican veteran Ricardo Mercado in July.

Undercard standouts include a trio of undefeated Top Rank-signed prospects: junior middleweight Kieran Molloy (3-0, 2 KOs) and featherweight Kurt Walker (4-0, 1 KO) will see action in six-rounders, while rising welterweight Paddy Donovan (9-0, 6 KOs) aims for his third victory of the year in an eight-rounder.

# # #
About ESPN+
ESPN+ is the industry-leading sports streaming service that offers fans in the U.S. thousands of live sports events, original programming not available on ESPN’s linear TV or digital networks and exclusive editorial content from dozens of ESPN writers and reporters. Launched in April 2018, ESPN+ has grown to more than 22.8 million subscribers. Fans sign up to ESPN+ for just $9.99 a month (or $99.99 per year) at ESPN.com, ESPNplus.com or on the ESPN App (mobile and connected devices).

Boxing is dangerous ... who knew