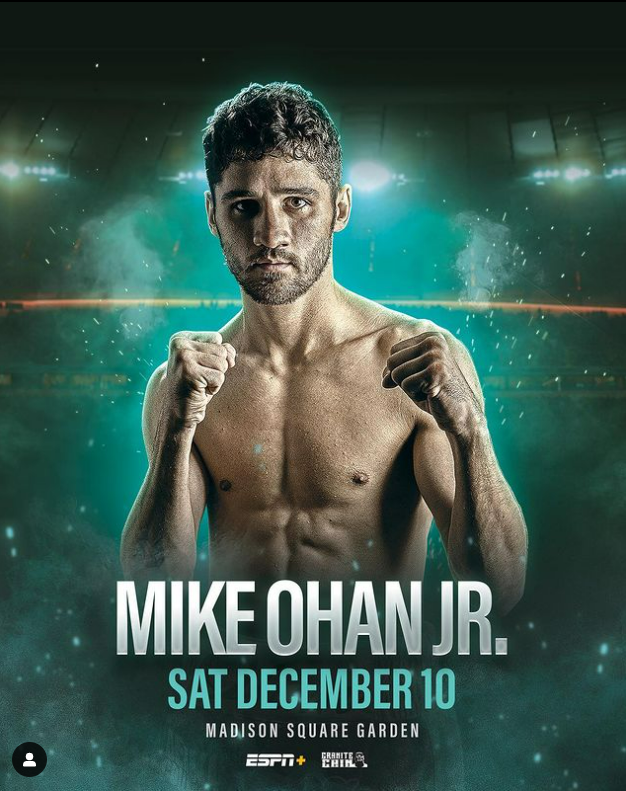 Former New England Welterweight Champion and current 140lb contender Mike “Bad Man” O’Han Jr (16-1, 9 KOs) has the opportunity of a lifetime ahead of him this weekend. He will be featured on the undercard of Saturday Night’s Top Rank Boxing card, which takes place at the heralded Madison Square Garden in New York. The card is headlined by former unified lightweight champion Teofimo Lopez (17-1, 13 KOs), as he competes in a WBC 140lb title eliminator against tricky Spanish southpaw Sandor Martin (40-2, 13 KOs); it will take place on Heisman Night which will only add to the hype behind the card.

O’Han is 7-0 with four stoppage victories since his only pro defeat, which was a debatable majority decision in July of 2019. Mike had been dealing with a nagging elbow injury for about a year; and after the defeat, he and his team found out via MRI that he had been fighting with a hairline fracture in his elbow for his last few fights, which clearly would hamper anyone’s ability to compete at their full potential.

Mike has been on a roll since fully recovering from the injury, and picked up the best win of his career in November of 2020. He defeated Ryan Dibartolomeo (who was undefeated at the time) by a wide unanimous decision to capture the vacant New England Welterweight Title (80-72 x2, 79-73).

He would make a defense of that title in 2021 against a certified veteran in Tyrone Luckey (16-19-4, 12 KOs). If you follow boxing, you understand that all records are not created equal, and many fighters with losing records can be much better than their records suggest. Luckey is no different, as he has spoiled the rise of many up–and-comers including Eduardo Aguilar twice, (7-0-1 and 7-1-1 at the time of those bouts) Jerome Conquest (9-2), Anthony Karperis (11-1), whom he all defeated by knockout. He has also served as a test for rising stars such as Ryan Garcia (23-0, 19 KOs), Jamaine Ortiz (16-1-1, 8 KOs) and Frank Martin (16-0, 12 KOs). It was good to see Mike get the job done against Luckey in a convincing manner and force a corner retirement at the end of round five of their matchup.

He will be opposite one of the highest rated prospects our country has to offer this Saturday, in 2020 US Olympian Delante “Tiger” Johnson (6-0, 4 KOs). Johnson had two wins in the Olympic games before losing in the quarterfinals to the eventual gold medal winner in his weight class, Roniel Iglesias of Cuba. Iglesias is a Cuban Amateur superstar, and there was no shame in Delante losing to him, especially with the Cuban being a decade his senior and having an abundance of experience at the highest level of amateur boxing.

“Tiger” has gotten his professional career off to a quick start since making his pro debut November of last year. This will be his seventh pro fight in just over a year, and he has continued to step up his level of opposition each time out. He picked up impressive wins in each of his last two outings, stopping a real tough veteran in Harry Gigliotti (8-4, 3 KOs) and earning a unanimous decision victory over Esteban Garcia (15-2, 7 KOs) who was the best name on his resume to date.

This whole card is littered with high level prospects in intriguing matchups, and you won’t want to miss this event Saturday night. The undercard will begin on ESPN+ at 6:00EST/3:00PT, with the main card starting at the conclusion of the Heisman Trophy Ceremony at 9:00EST/6:00PT.

I caught up with Mike earlier this week for a quick interview on our ITR Boxing YouTube channel. He spoke on how he got into boxing and previewed his upcoming matchup. I have the interview included down below, and I definitely recommend checking it out.