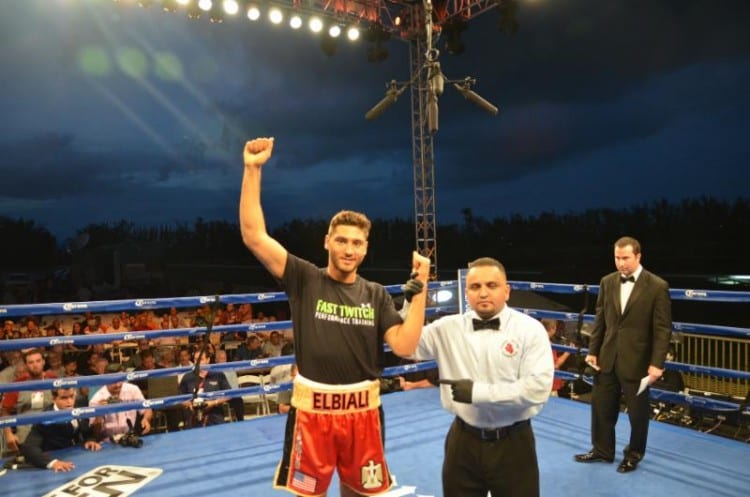 Tickets for “Noche De Combates,” are on sale now through Ticket Force (www.myticketforce.com), www.hialeahpark.com, and at the Hialeah Park Casino cage.

This will be the fourth ESPN appearance for Elbiali, and he’s made the most of them, scoring devastating knockouts in all four.  A former Egyptian champion now residing in Miami, Elbiali says he’s not going coming into this fight with delivering a KO as the foremost thought in his mind.

You’ve had some big knockouts on ESPN air, are you planning to deliver another one this Thursday?

I’m just going to try to do what I do best and that’s go out and get the win. If the KO comes, that’s no surprise because that’s what I train for.

Talk to me about the opportunities you’ve had to shine on FNF. You’ve become sort of their go to for a knockout on the televised undercard.

Yes! It’s been an amazing opportunity and privilege to be able to showcase my talent on ESPN. As a professional, I understood that it is also about entertaining an audience and the fans. Boxing is a beautiful sport and a business. When I’m up on the stage I’m a performer.

When did you realize you hit harder than most fighters?

Believe it or not, I never thought I hit hard and I still don’t think that at all. My main focus during camp is to train my body to hit harder and not get hit. When it’s time to fight, I just think about letting my hands go and getting the job done.

How soon until you graduate to FNF main event level?

I’m hoping, realistically, by next year. Of course I need to get through every fight and look outstanding in each of them. I don’t like to get over my head. All this is already a dream that I’m living and I’m going to take it step by step.

Lastly tell me what you know about this guy you’re fighting, Mike Stafford.

I know that he’s a British fighter that’s coming with more pro experience. I’m just going to go in and do what I do best and that’s BOX.

Launched in 2003, Warriors Boxing operates under a simple philosophy-bring the best boxers in the world to fight fans, match them in competitive bouts, and in doing so help re-establish the sport of boxing for a new generation.

With a series of successful Pay-Per-View shows and packed houses to its credit, the Warriors business model is working wonders in a sport that was sorely in need of the innovation and energy that the company brings to the table.

For more information on Warriors Boxing, visit their website at www.WarriorsBoxing.com.