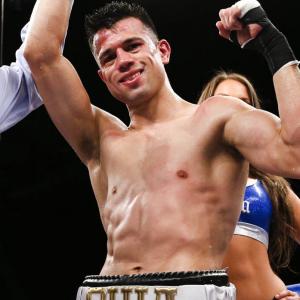 The undefeated Sadam “World Kid” Ali and fast -punchingFrancisco “Chia” Santana will face off at “The World’s Most Famous Arena”, Madison Square Garden on Sat. April 25 as the co-feature to “The Champion Returns”, the World Heavyweight Championship between undisputed heavyweight champion Wladimir Klitschko and top-rated challenger Bryant Jennings. The doubleheader will be televised live on HBO World Championship Boxing beginning at 10:00 p.m. ET/PT.

Promoted by Golden Boy Promotions and Gary Shaw Productions, the 10-round welterweight showdown between two of the sport’s rising stars will give fans an exciting night of boxing as they open up the telecast before the highly anticipated heavyweight main event.

Advance tickets to “The Champion Returns” may be purchased through the Madison Square Garden Box Office at www.TheGarden.com and through Ticketmaster, (www.Ticketmaster.com, phone 1-800-435-5000.)

“I’m excited to fight in my home state of New York and at Madison Square Garden,” said Brooklyn, New York’s Sadam Ali.  “Some of the greatest fighters in the sport have made their mark at this venue; Muhummad Ali, Joe Lewis, Oscar De La Hoya, Bernard Hopkins and I’m ready to be part of that history.  Francisco is a tough fighter and I’m ready to take him on and with the help of my promoter Golden Boy Promotions move forward to becoming a world champion.”

“I’ve earned my way to the position I’m in because I’ve fought and beat fighters who were undefeated,” said Francisco Santana of Santa Barbara, California.  “Nothing has come easy to me on the way up.  Fighting stiff opposition is what prepares a fighter for the next level and I’ll be ready for anything Sadam Ali brings.  My promoter Gary Shaw told me if I kept winning he would get me a big fight, and here we are getting ready to fight one of the best young contenders in the world.  A win against Ali will sky rocket my career and that’s exactly what I plan to do.”

“Coming off of an exciting match that saw him knockout a previously undefeated fighter, Sadam is now looking to take a next, crucial step up the welterweight ladder,” said Oscar De La Hoya, Founder and President of Golden Boy Promotions.  “With lightning-quick hands, true knockout power and a hunger to be the best in the division, the ‘World Kid’ is a must-see for all fans.”

“Francisco Santana is a warrior who grinded his way up the rankings and earned this fight against Ali on HBO,” stated Gary Shaw.  “This is a feel good story about a kid who fought his way to the big stage and bright lights of Broadway.  Those bright lights are now shining on his career.  I’ve always said, a fighter who is hungry is very dangerous, and Santana is famished.  He wants to win this fight and show the world he’s worthy of a world title shot.  I believe Santana is the underdog in the public’s eye, but he will once again fool the public with a great win on April 25.”

“We’re happy to add this exciting co-feature to this extraordinary event headlined by the World Heavyweight Championship between Wladimir Klitschko and Bryant Jennings,” said Tom Loeffler of K2 Promotions. “The matchup of these two rising stars should provide for a very strong opening fight to the HBO telecast.”

Former 2008 U.S. Olympian, Sadam “World Kid” Ali (21-0, 13 KOs) has been on the fast track to success in boxing since his professional debut in 2009.  The undefeated fighter impressed critics and fans early on, dominating all his opponents, including Michael Clark whom he beat via knockout in the first round on April 2014 to gain the WBO NABO Welterweight Title.  In August of the same year, Ali defeated Jeremy Bryan via split decision to gain the WBO Inter-Continental Welterweight Title.  In his most recent bout and the most notable to date of Ali’s career, he faced Juan Carlos Abregu knocking him down in the sixth and ninth round winning by technical knockout in the ninth round to give Abregu his second career loss.

Undefeated since 2012, Francisco “Chia” Santana (22-3-1, 1 KO) has solidified himself as one of the brightest and most dangerous stars in the welterweight division.  His victories against former undefeated prospect Eddie Gomez and veteran Joachim Alcine, have propelled him to the top of the weight class.  Santana’s most recent wins came by way of knockout.  In August of 2014, Francisco stopped Luis Alfredo Lugo in the fifth round, followed by a spectacular first round knockout of another undefeated prospect in Kendal Mena, a bout that took place in January of 2015.  Santana is ready to add another win to his record when he faces Sadam Ali on April 25.

Wladimir Klitschko vs. Bryant Jennings is presented by K2 Promotions and Gary Shaw Promotions in association with Madison Square Garden.

Matthysse-Provodnikov getting closer and closer

Rungvisai signs with Matchroom Boxing, to be featured on DAZN