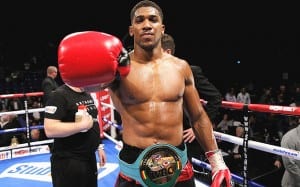 Unbeaten 2012 Olympic super heavyweight gold medalist Heavyweight Anthony Joshua (13-0, 13 KOs) has pulled out of a July 18 fight at the Manchester Arena in Manchester, England. No reason has been officially given, but it seems that Joshua will return September 12th at The O2 Arena in London on a Matchroom Boxing card that would feature the return of Kell Broook, who could possibly face Brandon Rios.

Joshua is being linked to fighting Mariusz Wach who would be his toughest fight to date, but still a very winnable fight for the heavyweight prospect.