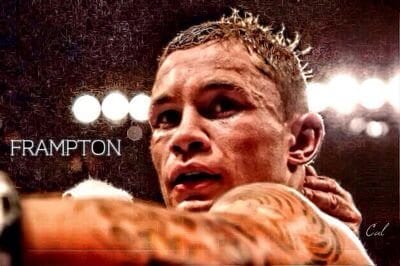 Well, this didn’t go as planned as Alejandro Gonzalez Jr. dropped IBF super bantamweight champion Carl Frampton twice in the first round as he knocked down Frampton with the first punch of the fight, a check left hook and floored him late in the round as well.  The bout which headlined the CBS portion of the fights from El Paso, Texas at the Don Haskins Convention Center, saw a fire fight that might endear Frampton to U.S. fans as he delivered an action packed fight headlining bout on Saturday afternoon.

Frampton rebounded from a horrible first round as he bounced back to win the next three rounds fighting mostly behind a jab that was allowing him to control tempo. Gonzalez Jr. began to struggle to keep Frampton away from himself which didn’t allow him to set up his own offense. As the fight wore on Frampton began to show his class over the duration of the fight as he would still get hit a bit more than one would like, but completely controlled the fight from the fourth round on with Gonzalez only having a few spurts here and there.

The final scores for the bout were 115-109, 116-108 and 116-108 all in favor of Frampton. After the bout, Frampton stated that he will need sometime decided whether he will stay at this weight class or go up in weight to featherweight after this bout.

Abraham stops Stieglitz in sixth round