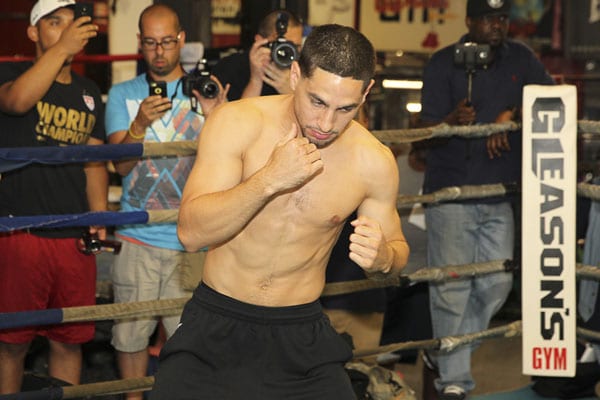 Below are the highlights from today’s press conference.

“We had a tremendous camp, I’ve never felt so strong in my life. For the first time in my career I can actually train to get better. We’re just focused on training. We did everything in camp – we even chased chickens. I accomplished a lot at 140-pounds and I’m going to do a lot at 147. On Saturday at Barclays Center you’re going to see a spectacular Danny Garcia.

“I want to be known as a great Philadelphia fighter and a great Puerto Rican fighter. I’m the first Puerto Rican from Philly to ever be a world champion. I have the Philly skills and toughness with the Puerto Rican blood, it’s the perfect mixture. I’ve watched Paulie fight my whole career. He’s a tough veteran and I’m sure he’s got some tricks up his sleeve. I just have to go in there and stick to business on Saturday night.

“Barclays Center is my home away from home. We have a nice routine when we’re in Brooklyn. We keep it simple. I pay attention to the positive things in my career and that’s getting in the gym and working hard and getting better. That’s my main focus. Everything is better at 147. I feel stronger. My form feels good. The footwork is great. I can eat regularly now. Still disciplined but it’s a lot easier.”

“For Danny’s team, it’s only about him and for me it’s all about myself. My best versus his best. This is a big opportunity from me, professionally and personally. My career started 14 years ago in Brooklyn and people think it’s going to end Saturday in Brooklyn, but I’m not letting that happen. It’s been an emotional camp. I find myself thrust back into the limelight of a major fight when it was least expected. The question marks and doubts come up in my mind and that’s made it emotional. I work hard every day. I’ve quietly had one of my best training camps

“There are no excuses here. Saturday night is the best of Paulie Malignaggi. I look forward to testing myself against the best Danny Garcia. I’ve always loved and relish the big names and the big opportunities. Sometimes I lay in bed at night thinking about matchups between fighters. Now I’m thinking of myself in that conversation and we’ll fin out on Saturday how I stack up. Quietly but surely, I’m very confident about Saturday night. I’m bringing my best.”

“This is another great opportunity to showcase my skills. I’m on a good knockout streak and I feel confident about this fight. Sergio Mora is a Rubik’s cube, you have to figure him out. He’s crafty and I have the utmost respect for him. I’m 100 percent confident in my ability to go out there and put on a good show. I hear Sergio is coming here to knock me out and if that’s the case this is going to be a real exciting fight. I look forward to it because I’m coming forward and if two guys are doing that it’s going to be a great fight. I’m excited to give these Brooklyn fans a great fight. I love being at home and seeing all of the familiar faces I’ve seen since the amateur days.”

“I’m excited to fight at Barclays Center. Brooklyn is beautiful and has great fans. Lou DiBella is about to have another fighter named Sergio as a middleweight champion after Saturday night. I think this is going to be a really successful fight because of all the stars up here. It’s a great event for boxing fans. I’m a grown man now and I’m looking to become a two-time world champion. This is my third time at a middleweight title shot but the first time an opponent showed up. I’m excited and ready to go. I’m thankful for everyone who has opened the door for me.

“Danny had a great camp. It was an awesome camp and he’s going to make a lot of noise. We’re not taking Malignaggi lightly, but we’ve come to win. We don’t come to lose. It’s not about Malignaggi, it’s about Danny. People can say whatever they want to say but we’re coming to make noise at 147. We’re not running from anybody. I promise you Danny will be the world champion at 147. I’ve seen visions of it. This is going to be a great fight and then after that anybody can get it.”