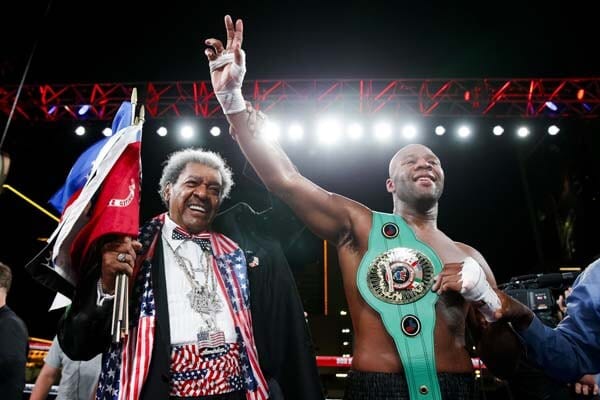 Heavyweight prospect Trevor Bryan (16-0, 11 KOs) scored a hard fought ten round unanimous decision over tricky vet Derric Rossy (30-10, 14 KOs) on Friday night at “The D” in Las Vegas, NV. Bryan dropped Rossy in round one with a left hook, but unlike most fighters the knockdown seemed to bring Rossy to life in the fight rather than befuddle him. Rossy would wage back to create a very even bout that in a 100 degree heat under pale moonlight. In the end Bryan had just a tad bit more than Rossy who offered all that he could with the final scores reading 97-92, 98-91, 98-91 all in Bryan’s favor.

Middleweight late sub DeCarlo Perez (15-3-1, 5 KOs) scored a ten round unanimous decision over previously unbeaten two-time Dominican Republic Olympian Juan Ubaldo Cabrera (23-1, 16 KOs). Perez outworked Cabrera after the third round and went on to post a 97-92, 98-91, 98-91 verdict. Cabrera was cut over the right eye by a headbutt in round one and was deducted a point in round seven for holding.

Ceja gets off canvas to beat Ruiz in PBC opener