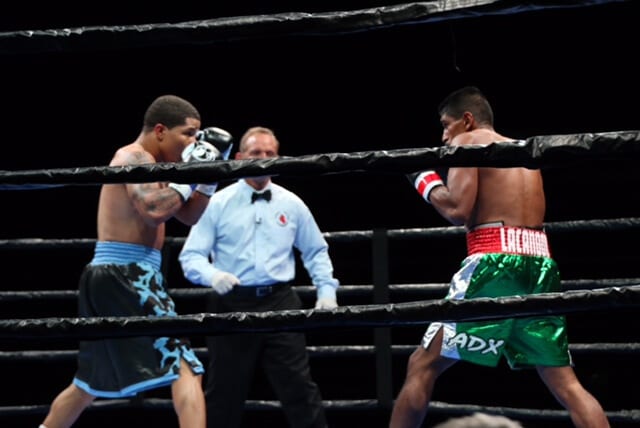 GERVONTA “TANK” DAVIS WINS BY TKO ON BOUNCE TV
Davis defeated Mexico’s Cristobal Cruz by TKO in 1:31 of Round 3 in Orlando, Florida, with Floyd Mayweather supporting him at ringside.
BALTIMORE, MARYLAND, U.S.A. – On Friday night, October 30, 2015, undefeated super featherweight professional boxer, Gervonta “Tank” Davis (Baltimore, Maryland) needed just three rounds to defeat former world champion Cristobal Cruz (Tijuana, Baja California, Mexico) via TKO at The Venue on The University of Central Florida’s campus (UCF) in Orlando, Florida. A few hours before the fight, world champion Floyd Mayweather entered Davis’ locker room and spent some time with him and his team. Following Davis’ win, Mayweather praised him during his post-fight interview, which aired live on Bounce TV. In the main event, Malik Scott defeated Tony Thompson by unanimous decision in a ten-round heavyweight fight. Davis-Cruz was originally scheduled for ten rounds, but moved to an eight round fight to accommodate television programming. The fight card, “Premier Boxing Champions – The Next Round,” was presented by Warriors Boxing and televised by Bounce TV. With the win, Davis’ record improved to 13-0, with 12 KOs. With the loss, Cruz’s record dropped to 40-19-4, with 24 KOs.
In the beginning of fight, Davis and Cruz let their hands go early on, as each boxer tried to gain an advantage. Near the end of the first round, Cruz landed a wide right hand that forced Davis to backpedal and reset. Moments later, Davis landed a straight left hand that floored Cruz. In the middle of Round 3, Davis landed a big uppercut, causing Cruz to retreat and slide back to the corner to prevent Davis from landing any further blows. Cruz gathered himself to his feet before the end of the count, but referee Frank Santore, Jr. stopped the fight at 1:31 of Round 3.
Davis’ boxing trainer, Calvin Ford (Upton Boxing Center/Baltimore, Maryland), said, “I thought Tank came out and did a good job of handling Cruz. He landed some great shots that we had worked on in the gym, and he executed them perfectly. He is still a young fighter, and he has a lot to learn as his opponents become tougher. Mayweather gave Tank some great tips on fighting a veteran opponent, and he was very supportive. He kept the locker room fun and relaxed before the televised fight. For now, we’ll go back and look at certain things that we have to work on in order to move forward. You have to do certain things in your preparation for fights in order to become a world champion. We have to work on those things and improve.”
The 20-year-old Davis discussed his win in Orlando. He said, “I’m pleased with my performance. I still have a ways to go, and I have some things I need to work on to be where I want to be. In this fight, I came out and dictated the pace, and thought I showed good ring generalship. Cruz was awkward and kept leaning in with his head. His punches were coming in from all over, and I eventually adjusted to his style. It didn’t take long after that. I hit him with some heavy shots throughout the fight. He took it, and was tough. I knocked him down in Round 1 with a straight left hand and body combo, but he survived. I finished him with a big uppercut in Round 3 and the ref stopped it.”
Davis continued, “I appreciate Floyd Mayweather flying in on his private jet to come to my fight and support me. He told me days before the fight that he was coming, but I didn’t know if he was coming for sure. He showed up a few hours before the fight. He came in the dressing room and that helped motivate me to put on a great show. I’m looking forward to being back in the ring real soon. I’m looking to build my experience, and get the right preparation so I can be ready for a title shot in 2016. Thank you to my team, Floyd Mayweather and Mayweather Promotions, Al Haymon, Nike Boxing, Athlete Performance Solutions, Shane Goodell, Rich Brand, and Ethika. Thanks to all my fans that have been hitting me up on social media and telling me how much they are pulling for me. Keep supporting me, and I’ll fight for you.”
Floyd Mayweather of Mayweather Promotions said, “Tank is a young, hungry fighter, and he showed in this fight that he has a very bright future. He’s from Baltimore, and he came from a humble background, like myself. He has all the tools to be one of the best in this sport. He’s a hard worker, and he’s shown that he’s dedicated. We are going to work hard to get him to that next level. The ultimate goal is for him break all my records.”
Follow Gervonta Davis on Instagram: @Gervontaa or http://instagram.com/gervontaa
Follow Gervonta Davis on Twitter: @Gervontaa or https://twitter.com/Gervontaa
Follow Gervonta Davis on Facebook: https://www.facebook.com/GervontaTankDavis
Hashtags: #Tank #TheOne
Follow Calvin Ford on Instagram: @ccoford or http://instagram.com/ccoford
Follow Calvin Ford on Twitter: @cfordrize or https://twitter.com/cfordrize
Photo Credits
October 30 fight pics courtesy of Esaiah Gomez/ Mayweather Promotions
All other pics: courtesy of Team Davis
Tags:#boxing#TheOneTank