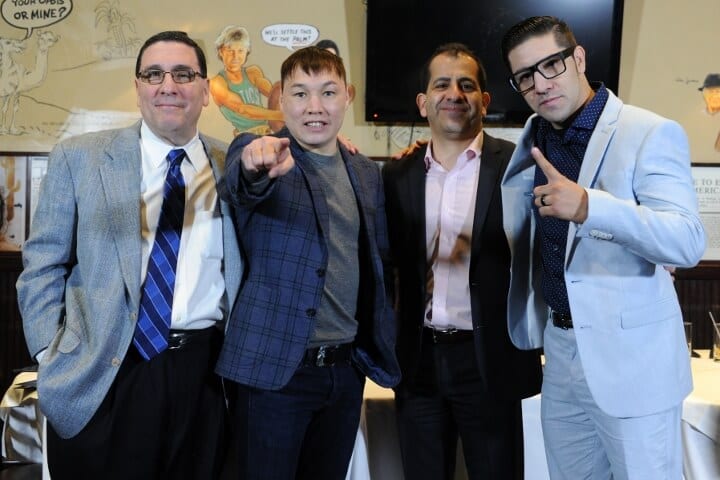 Tickets for the live event, which is promoted by Banner Promotions, Inc., are priced at $85, $60, $45 and $35 and are on sale now. Tickets can be purchased in person at the Turning Stone Box Office, by calling 877.833.SHOW, or online at Ticketmaster (www.ticketmaster.com).

“As soon as I heard the name John Molina, I jumped on it. Molina fights with the type of style that people want to see. He brings the action.

“June 11 is another Fight of the Year-type fight. You can expect fireworks.

“People expect action fights when I get in the ring. I appreciate that SHOWTIME saw a value in what I can offer and I want to make sure that I don’t let them down.

“I’ve only seen one fight of his, and that was the fight with (Lucas) Matthysse. That fight shows the type of fighter he is.

“I think our styles are going to clash. The reason people love this is because it’s unpredictable. Nobody knows what’s going to happen on June 11. Nobody can even predict which way it’s going to go. We’re both punchers, we both go forward, we both fight in a risky style. I think that’s going to make this fight a fight that everybody should watch.

“The fight is already a huge motivation, but the fact that the Hall of Fame is the same weekend is definitely great. I’m definitely pleased to know that because hopefully one day I can be a part of that.”

“He’s a hell of a fighter. He has a big heart and a big will.

“I have to prepare for someone that has a never say die attitude. He’s like a virus that will never go away. He’s a hell of a fighter – he has a big heart and a big will. It’s tough to beat a guy that wants to win.

“We’re going to give the fans a treat, a Gatti-Ward type fight. I expect nothing less. We can have a phone booth, we don’t need a big ring.

“The judges probably don’t even need to be there because we’re going to decide the fight ourselves.”

“Willie Nelson, he’s going to come in and he’s going to try and throw those power shots. He’s going to try to stomp me down and make a statement, but I’ve been doing this for too long. I’m just ready to be where I need to be, where I deserve to be, and that’s on the top.

“I’m not worried about ring rust. I stayed in the gym like a true champion should. I’m still young in the game so I don’t think I should have any problems seeing or ducking any punches.

“I’m confident and I know I’m the best 154-pounder out there and this fight right here is going to let people know that I’m back in business.

“Everybody knows the work that I’ve put in. The time is now and the time is coming.

“I’m ready to re-introduce myself to boxing fans and show them I’m the best 154-pounder in the world.

“After this fight with Willie Nelson, I plan on fighting the winner of Jermell Charlo and John Jackson and getting that WBC belt. And after that, I want to face the rest of the division and prove I’m the best.”