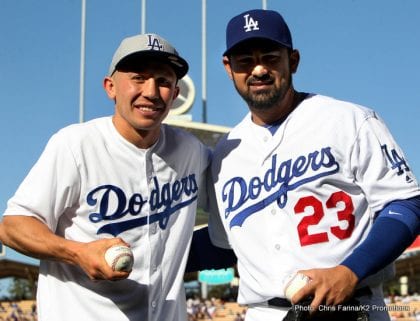 We’re halfway through media fight week for Saturday April 23rd’s highly anticipated  showdown between UNDEFEATED Boxing Superstar Gennady “GGG” Golovkin, and mandatory challenger Dominic Wade.  We would be remiss if we didn’t bring you footage of his step up to the mound to throw out the ceremonial first pitch for the Los Angeles Dodgers prior to their showdown against their arch rivals, the San Francisco Giants, which was this past Sunday.  This will be the third time Golovkin has received the honor from the Dodgers, many of whom have attended his previous two Los Angeles fights. A sell-out is expected and K2 Promotions is encouraging fans to purchase their tickets in advance. Take a look and see if you think GGG should stick to boxing, or try his hand at America’s favorite pastime: