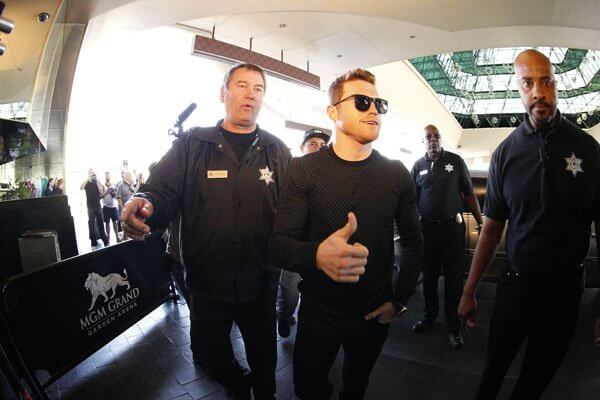 WBC, Ring Magazine and Lineal Middleweight World Champion Canelo Alvarez (46-1-1, 32 KOs) and British top fighter and former two-time world champion Amir “King” Khan (31-3, 19 KOs) met today for one final press conference at the Kà Theater in the MGM Grand Hotel and Casino in Las Vegas ahead of their Middleweight championship mega-fight showdown on May 7 at the new T-Mobile Arena, which will be produced and distributed live by HBO Pay-Per-View® beginning at 9:00 p.m. ET/6:00 p.m. PT.

“There’s not too much more left to say, the fight is here. I just want to thank each and every one of you for your support and promotion of this fight. I’m very happy with the work I have done. Khan is a very fast, very elusive, and very tricky fighter, but I am happy with the work I have done and I am ready to go in the ring and break him down. And again, I am much honored to be opening T-Mobile Arena. Come Saturday, I’m excited to yell, ¡Viva Mexico!”

AMIR KHAN, Former Two-Time World Champion:
“On Saturday you will see the best of Amir Khan. Canelo is a great champion who is dedicated to the sport of boxing, but it is my time and I’m going to grab it with both hands. It’s been my dream to hold a great fight like this in Las Vegas. And, you never know-this could be the last fight between Canelo and I here in Vegas if Donald Trump is elected president.”

“It’s great to be beside a fighter who dares to be great. Amir is a hard worker, not only an Olympic silver medalist, but here is a fighter who is a multiple weight world champion, always asking for the big fights and never getting them. Guess what? He’s now here facing the top fighter in the world, and he’s ready for it and excited to face him. Whoever thought that Muhammad Ali could knock out George Foreman? I just talked to Foreman and people were praying he didn’t hurt Ali and look what happened there.

“There’s a reason Floyd Mayweather and Manny Pacquiao didn’t want to fight Amir Khan because he possesses skills like no other. He may come in as the underdog, but he also comes in as huge favorite to those who know the sport and to many of those who have seen him fight.

“Canelo is a great fighter and has accomplished so much at 25 since beginning to fight at the tender age of fifteen. This match up will be truly incredible to witness, and the fans will be in for a great night come Saturday. ”

“All the hard work has been done. This has been a dream for Amir, to get to the top and fight the best fights and be amongst MannyPacquiao and Floyd Mayweather Jr. Amir always said he wanted this fight and we worked hard towards it.

“It has been a great training camp with great sparring, and Amir looks incredible. The world is looking right at this fight. Initially, many were saying this wasn’t a right fight. This happened to Amir back in his Olympic games when he was 17 years old. As the fight went on, the media didn’t have enough seats to watch him. Now we’re back, Amir is an underdog and we’re going to prove everyone wrong. This is the fight he wants, and I think we’re going to repeat history here on May 7.”

“I want to thank T-Mobile, great venues make great fights. Thank you to Canelo Promotions and Amir Khan’s camp. Lastly, I want to thank Golden Boy Promotions and everyone on the team. When I spoke to Oscar De La Hoya earlier this year, he said he wanted to make the best fights possible. Oscar has consistently lived up to his word, and you can see this is the best fight of 2016 so far. It’s very commendable what Golden Boy Promotions has achieved. This is going to be a great fight.

“Canelo has had a spectacular year in 2015 with a great win over Cotto. For Khan, it has been four years since we’ve seen him, and we’re happy to have him back. We’ll see on Saturday night whose time it is. Both fighters are incredibly hungry. If you haven’t already, check out 24/7 to see the incredible regimens these fighters go through. We are looking forward to Saturday night for these great fights.”

“When Oscar De La Hoya mentions Cinco de Mayo, I think of coming to Las Vegas in the past to watch the biggest boxers with my father. Today, the eyes of the world are on Las Vegas. HBO, the best network in the history of the sport, is broadcasting one of the best fights to be made today. Two elite fighters fighting each other to make sure the world gets a real boxing match.

“I think Amir has a strategy he plans on performing on Saturday, same as Canelo, backed by tremendous teams. They have worked very hard to make this a success. We have a Catholic fighter against a Muslim fighter, and both have been named as ambassadors for peace by Pope Francis. I wish Canelo and Amir the best of luck and may the best man win.”

“It took a lot of people to put this fight together: HBO, Oscar De La Hoya, and the two camps of Canelo and Amir Khan. It’s a great thing to see, especially being from a Middleweight champ, which is true to my DNA history. History is a very important thing to me. “Let’s enjoy this fight before we start talking about the next fight. We want to put the best in front of the best. Oscar put the best in his career, and Amir Khan has come to make it happen. Enjoy the fight, sit back and do what you do. Either way, we’re going to keep putting together great fights.”

“We are thrilled to be a part of this international sporting event between Canelo and Amir Khan. This will the first of many great boxing events to be held here. T-Mobile Arena has truly changed the Las Vegas landscape in sports and entertainment arenas. Canelo is returning after a tremendous win over Cotto, and Amir returns after nearly 18 months from Las Vegas to take on this huge fighter. We will look forward to seeing everyone Saturday night.”

“On behalf of the Nevada State Athletic Commission, we thank Golden Boy Promotions for bringing this championship fight to the fight capital of the world and to T-Mobile Arena. ¡Feliz Cinco de Mayo!”