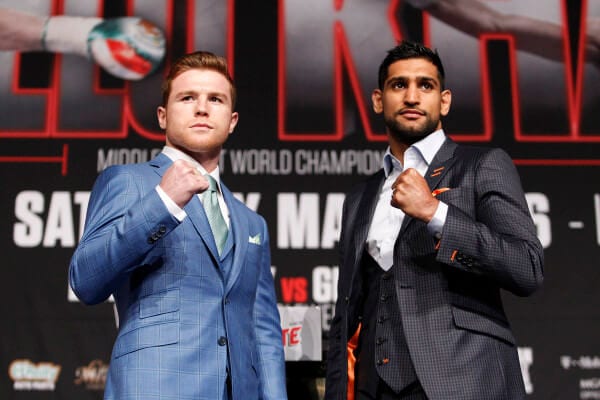 WBC middleweight champion Canelo Alvarez (48-1-1, 34 KOs) defeated welterweight Amir “King” Khan (31-4, 19 KOs) who moved up to 155 lbs. in a catchweight middleweight bout with a stunning sixth round knockout on Saturday night at the new T-Mobile Arena in Las Vegas. Khan picked up an early lead with fast hand speed and ability to keep Canelo at bay. Canelo though landed good body work in the fourth and fifth round. The finish came in the sixth round in which Canelo timed Khan’s jab landing a dynamic overhand right that put Amir Khan out cold.

Journeyman middleweight David Lemieux (35-3, 32 KOs) picked up a fourth round TKO stoppage over Glen “Jersey Boy” Tapia (23-3, 15 KOs) in the co-main event. Lemieux dominated the whole fight until landing a decent blow that floored Tapia, Tapia beat the count, but his corner through the towel in.

Welterweight Frankie “Pitbull” Gomez (21-0, 13 KOs) won a wide decision over Mauricio “El Maestro” Herrera (22-5, 7 KOs), who near seemed to show up for this fight. Gomez was simply able to outwork Herrera who donned cuts under both eyes after the second round. The judges scored the bout 100-90 on all three cards.

Middleweight Curtis “The Cerebral Assassin” Stevens (28-5, 21 KOs) started the evening off with a KO over previously unbeaten Patrick Teixeira (26-1, 22 KOs). Stevens come over the top with a short right hand that floored Teixeira, setting up the stoppage.