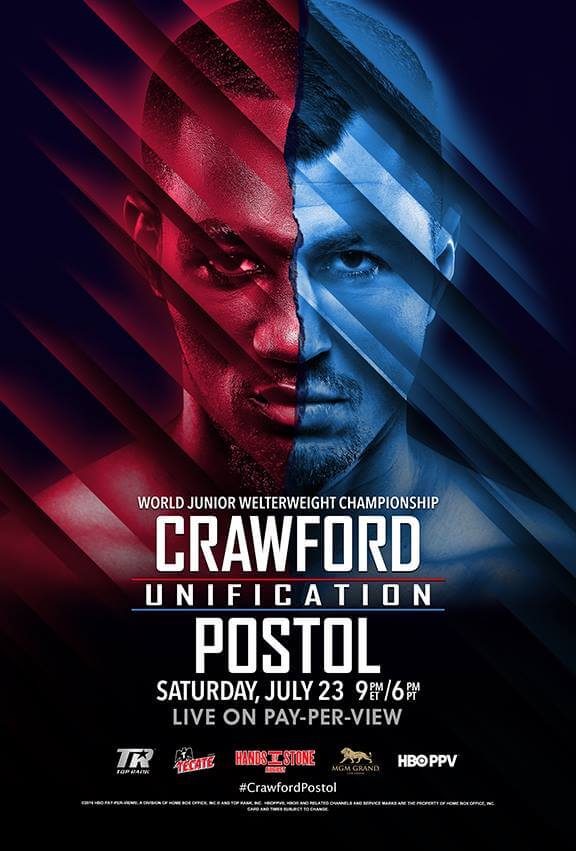 Promoted by Top Rank®, in association with Tecate and the motion picture “Hands of Stone,” the Terence Crawford – Viktor Postol world championship pay-per-view event will take place on Saturday, July 23, at the MGM Grand Garden Arena in Las Vegas, Nevada. It will be produced and distributed live by HBO Pay-Per-View® beginning at 9:00 p.m. ET / 6:00 p.m. PT. The Ramirez vs. Britsch world championship bout will be co-promoted by Zapari Boxing Promotions.

“I am very excited to be making my first world title defense. I am working hard to make it a successful defense as I plan to be a world champion for a long time,” said Ramirez. “Dominik is a tough challenger, very strong. I don’t know a lot about him personally but I will train hard as always. It feels great being on another HBO Pay-Per- View event. One day I want to be in the main event of a pay per view. That goal motivates me to do my best.”

“I am very happy to be fighting the No. 1 super middleweight — world champion Gilberto Ramirez,” said Britsch. “My slogan is, ‘Only those who dare to lose can win.’ Gilberto, I am ready for you.”

“I really believe that looking at my past few fights I have earned the opportunity to fight for a world championship,” said Valdez. “Now is the time to take advantage of this opportunity.”

“Although this will be my second fight in the U.S. and many people might think I am not the favorite, I will surprise lots of fans,” said Rueda. “I respect my opponent, but I am going to Las Vegas determined and with only one thing on my mind – winning the belt and bringing it back to Argentina with me. You can all be sure of that. My opponent is going to lose. I respect him, he is a very good fighter, but he will lose.”

“This fight is very important because I want to show everyone that I am ready to beat world-class fighters in the welterweight pound division,” said Benavidez. “I know Santana is a good fighter but I have what it takes to outclass and beat him on July 23. I have been training hard and am more than ready to show what I bring to the table on fight night and prove I belong.”

“I feel extremely blessed to be fighting against Benavidez on HBO Pay-Per-View. He is a talented fighter but I am ready to rise to the occasion and prove to the world that I am an elite fighter and a future world champion,” said Santana. “I view this fight as getting me one step closer to a world title shot. On the night we get into the ring I will live up to my motto – ‘Train, Fight, Win’ – one fight at a time.”

Ramirez (34-0, 24 KOs), a two-fisted super middleweight wrecking machine who hails from Mazatlan, Mexico, made history in the co-main event to the Manny Pacquiao vs. Timothy Bradley welterweight pay-perview on April 9 when he became Mexico’s first fighter to win a super middleweight world title. Entering the fight as the top world-rated contender, Ramirez gave a virtuoso performance over the defending WBO champion Abraham. All three judges scored it as a 120-108 blitzkrieg. “I took him to Mexican boxing school,” a jubilant Ramirez boasted as he put on the world championship belt . A sensational young champion, Ramirez, 24, has won four of his last eight bouts by knockout. Career-highlight performances include an NABF and NABO title victory over Giovanni Lorenzo via fifth-round stoppage, a WBO International title knockout victory over Junior Talipeau and a successful defense of his NABF and WBO International titles, stopping Fulgencio Zuniga in the eighth round, all in 2014. Last year he successfully defended his titles via unanimous decisions over once-beaten Maxim Vlasov, division gate keeper Derek Edwards, who boasts a KO victory over world champion Badou Jack, and once-beaten Gevorg Khatchikian, who had scored knockouts in five of his last six victories

Britsch (32-2-1, 11 KOs), of Neckarsulm, Germany, enters this fight riding a four bout winning streak and having won six of his last seven bouts dating back to 2013. Known for his body punching prowess and his excellent skills and movement, Britsch’s trophy case features the International Boxing Federation (IBF) Intercontinental middleweight and German super middleweight championship belts. This will be his first fight in the U.S. since 2011.

Valdez (20-0, 17 KOs), who represented Mexico in the 2008 and 2012 Olympics, was the first Mexican fighter to qualify for two Olympic games and is considered one of the bright lights of the featherweight division and a new face for boxing’s next generation. In his last fight, on the undercard of the April 9 Pacquiao-Bradley pay-per-view, Valdez solidified his status as the World Boxing Council (WBC) and WBO No. 1 contender by scoring a fourth-round TKO of former IBF featherweight world champion Evgeny Gradovich. It was the first time Gradovich had ever been stopped in his 24-bout professional career. On the undercard of Pacquiao – Bradley II welterweight world championship rematch in 2014, Valdez captured the NABF super featherweight junior title, knocking out Adrian Perez in the fourth round. Valdez successfully defended that title twice in 2014, knocking out Noel Echevarria and Alberto Gonzalez in the sixth and seventh rounds, respectively. From Nogales, Sonora, Mexico Valdez, 25, won all four of his 2015 fights — three by knockout. He fashioned a third-round blasting of Jose Ramirez on April 11, in Laredo, Texas. Valdez followed that with his live HBO debut, winning a dominant 10-round unanimous decision over one-time world title challenger Ruben Tamayo on June 27 in Carson, Calif. He ended 2015 with knockout victories of top-10 contender and one-time world title challenger Chris Avalos and Ernes Sanchez on September 11 and December 12, respectively. The four fighters boasted a combined record of 91-19-5.

Rueda (26-0, 23 KOs), from Tandil, Buenos Aires, Argentina, enters this world championship fight having won his last 10 fights by way of knockout which he credits to his exciting “seek and destroy” style and deadly punching power. He has made six defenses of the WBO Latino featherweight title he captured in 2013 via a third-round knockout of Juan Solis, On January 16, he also became the South American featherweight champion, scoring an eighth round knockout of Leandro Mendes. In his last fight, which took place on April 2, Rueda iced Nestor Pamigua in the third round to successfully defend both of his titles.

Benavidez (24-0, 16 KOs), from Phoenix, AZ, won his first world title in 2014 when he won a hotlycontested unanimous decision over defending World Boxing Association (WBA) interim super lightweight champion Mauricio Herrera. After one successful title defense — a 12th-round knockout of Jorge Paez, Jr. in 2015 — Benavidez vacated the title to move up to the welterweight division. His debut in the heavier weight class took place on December 12, where he won a blistering 10-round unanimous over Sidney Siqueira. An amateur standout, at 16, Benavidez was the youngest boxer to ever win the National Golden Gloves Championships, in 2009. He was also the youngest boxer, at 17, to be licensed by the Nevada State Athletic Commission. An exception was made for the minimum age requirement of 18 years because of his exceptional talent. Benavidez is currently the WBA’s No. 6 world-rated welterweight contender.

Santana (24-4-1, 12 KOs), from Santa Barbara, Calif., enters this fight having won 12 of his last 13 bouts, with half of those victories coming by way of knockout.. A favorite of Southern California fight fans because of his exciting style and two-fisted power, Santana boasts several notable victories including a firstround knockout of undefeated contender Kendal Mena for the WBA International welterweight title in 2015, and back-to-back unanimous decisions over former world champion Joachim Alcine and Freddy Hernandez in 2013. In his last fight, on April 2, he scored a 10-round unanimous decision over Edward Paredes.