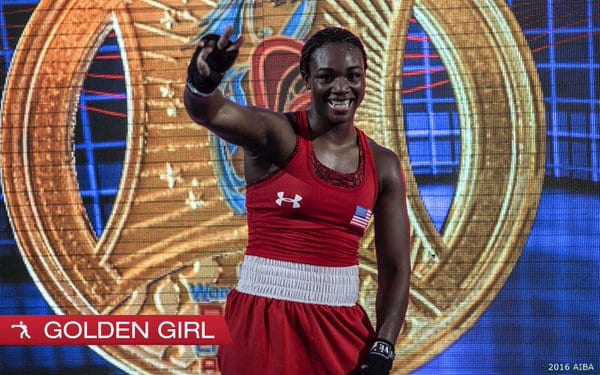 Shields is the first American female boxer ever to win two elite world titles and the first U.S. boxer to claim consecutive world championships since Eric Griffin in 1991 and 1993 prior to Shields’ birth. American Heavyweight Shadasia Green (Newark, N.J.) earned a silver medal in her first World Championships on Friday after falling to a host nation boxer in their final round match-up.

Shields entered the ring on Friday on a 47-bout winning streak with the only loss of her illustrious career coming in the 2012 World Championships. Her gold medal bout featured a showdown with number two tournament seed Nouchka Fontijn of the Netherlands. Fontijn held the height advantage but as usual, nothing was going to derail the reigning Olympic champion from her mission. She won her fourth unanimous decision victory of the tournament over Fontijn in the championship bout to claim her second elite world title. Shields dominant performance in Kazakhstan also earned her the Outstanding Boxer of the Tournament award.

“To be a two-time world champion feels great. I have never had these emotions before and it was definitely overwhelming. It made me feel so complete and happy in my heart. My confidence never goes away. I’m just ready to train and get better for Rio,” Shields said. “This World Championships was different because I was coming in as the reigning World Champion not just the Olympic Gold medalist. I had a standard to uphold and that was to dominate everyone.”

Shields opened the tournament with a last second TKO victory before taking four straight unanimous decisions en route to yet another international gold medal. Since becoming the first American female boxer to win the Olympic Games in 2012, Shields has won a Youth World Championship, two Elite World Championships, the 2015 Pan American Games and the Americas Olympic Qualifier in addition to numerous national championships. She has notched wins in 10 different countries and the streak has reached across four continents.

She has clearly established herself as the most dominant female boxer in the world and only two athletes in the men’s division, Cuba’s Lazaro Alvarez (Lightweight/132 lbs) and Julio La Cruz (Light Heavyweight/178 lbs) have also won two elite world championships in the last four years.

Although she has racked up every title possible, Shields is not satisfied and still believes she has work to do before the upcoming Olympic Games. “Between now and Rio I am going to just get better,” she said. “I am my biggest critic and I like to acknowledge my mistakes and fix them. I am in great shape and adding more tools to my arsenal so I can dominate in the Olympics again.”

Green competed in the final bout of the tournament on Friday at the Barys Arena and the international newcomer entered the ring to a rowdy hometown crowd cheering on her opponent Laszzat Kungeibayeva of Kazakhstan. The American boxer dropped a 3-0 decision in their gold medal bout, giving her a silver medal in her first major international competition.

Amateur boxing event at Fire in the Ring Gym (Brisbane, CA) on Sunday

Oshae Jones, The Olympian Looking For Gold in Tokyo