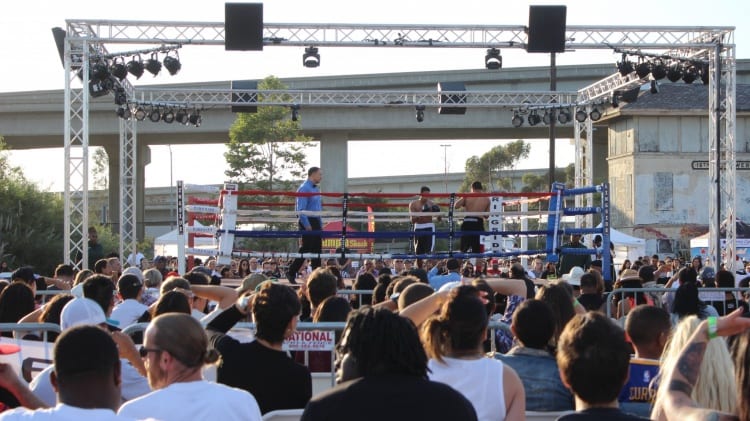 In front of a packed crowd at the historic 16th St station in West Oakland, CA, hometown legend middleweight Tony Hirsch (21-6-2 8KOs) defeated Taneal Goyco (8-9-1 3KOs) of Philadelphia, PA. Goyco missed weight the day before, so bad in fact Hirsch almost didn’t take the fight. Hirsch decided in the end to fight in his hometown and saw his right hand landing effectively all night as Goyco tired to tie him up and wear him down, which didn’t work well. Hirsch won by unanimous decision.

The co-main event saw an upset as super flyweight Mike Ruiz Jr (11-4-2 4KOs) defeated “The Aloha Kid” Bruno Escalante (14-3-1 6KOs) in a eight round unanimous decision. The bout will be marred by confusion sadly since a head clash in the first round seemed to greatly impact Escalante, who never fully recovered from the clash of heads. Ruiz, who won the early rounds, was dropped by Escalante in the middle rounds once. The fight appeared to be fairly even with people who favor aggression scoring it for Ruiz and people who like movement and precise shots for Escalante, but Ruiz pulled of the victory. This was the second time they fought in the pros, Escalante beat Ruiz in 2013.

Junior middleweight Ricardo Pinell (13-2-1 6KOs) stopped Adan Leal (9-6-1 7KOs) in the fifth round in which Leal’s corner threw the towel in and actually entered the ring to stop the bout. Pinell dropped Leal in the previous round , but Leal was saved by the bell.

Junior middleweight Otis Seymore (6-0 5KOs) defeated a very tough Ryan Soft (3-5-1 1KO). Seymore, who dropped Soft appeared to be close to closing the show, but a bad knee seemed to limit Seymore’s mobility as he picked up a decision victory.

Oakland, CA native Bilal Mahasin (8-3-1 1KO) returned to his winning ways by defeating a tough veteran in Vincente Guzman (3-6 1KO), Oakland, CA Jasper McCargo (1-0 1KO) picked up a knockout win over David Douglas (0-1) in his professional debut and Pedro Moreno (2-0 2KOs) continued his winning ways stopping Denis Madriz (0-4-1) in the second round to open the card.

The bout was promoted by O.P.P. Presents Boxing with the matches made by Andy Nance and featured an intermission with Richie Rich as well as a live performance from Beeda Weeda.

Evgeny Shvedenko, Melissa McMorrow and Aaron Coley all were schedule to fight, but were unable to due to last minute cancelations.