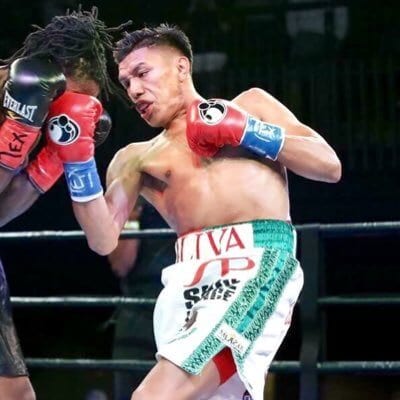 On Friday, August 12, undefeated Miguel Flores will take on Ryan “The Polish Prince” Kielczewski in the 10-round main event during an epic night of championship boxing at Turning Stone Resort Casino with a live telecast on ESPN’s Premier Boxing Champions beginning at 9:00 p.m. ET/6:00 p.m. Promoted by Kings Promotions, the August 12 card will also include Bryant Parella vs. former Olympian Yordenis Ugas and two New York fighters, Josue “The Prodigy” Vargas from the Bronx, NY and Abraham “Super” Nova from Albany, NY.

The main fight pits undefeated featherweight Miguel Flores (20-0-0, 9 KOs) against the experienced Ryan Kielczeweski (25-1-0, 7 KOs). Flores boasts a potent arsenal of punches, where Kielczewski is skilled at countering, ensuring sparks will fly when the duo meet on August 12. Other bouts include the hard-hitting Bryant Parella (14-0-0, 13 KOs) taking on former Olympian Yordenis Ugas (15-3-0, 7 KOs) in what is sure to be an electrifying fight.

Also on the August 12 card, welterweight Josue Vargas (5-0-0, 4 KOs) from the Bronx will take on a yet-to-be-determined opponent, as he attempts to keep his undefeated record intact.  Prior to starting his professional career in November 2015, Vargas compiled an amateur record of 80 fights with 72 wins and 8 losses. As an amateur, Vargas was a four-time Junior Olympics champion, a National Silver Gloves tournament participant and fought oversees in Serbia for the Golden Gloves International Tournament.

After an incredible amateur career, the hard-hitting 22-year-old super-featherweight Abraham Nova from Albany, NY made his pro debut in April of this year, winning in a first-round knockout.  The prestigious titles he won as an amateur include national and international victories at the 2014 USA Nationals, the 2014 Independent World Cup in the Dominican, Gold at the 2014 Cheo Aponte Tournament, and the 2015 Olympic Qualifiers.  He is also a five-time New York Golden Gloves Champion.

Tickets for the August 12 fight at Turning Stone Resort Casino will go on sale Thursday, July 14 at 10:00 a.m. and can be purchased in person at the Turning Stone Box Office, by calling 877.833.SHOW, or online at Ticketmaster (www.ticketmaster.com). Tickets are $60 for ringside seats, with other seats available for $35 and $25 (may be subject to additional fees).

Sergey Lipinets ready for Walter Castillo this Friday on ESPN