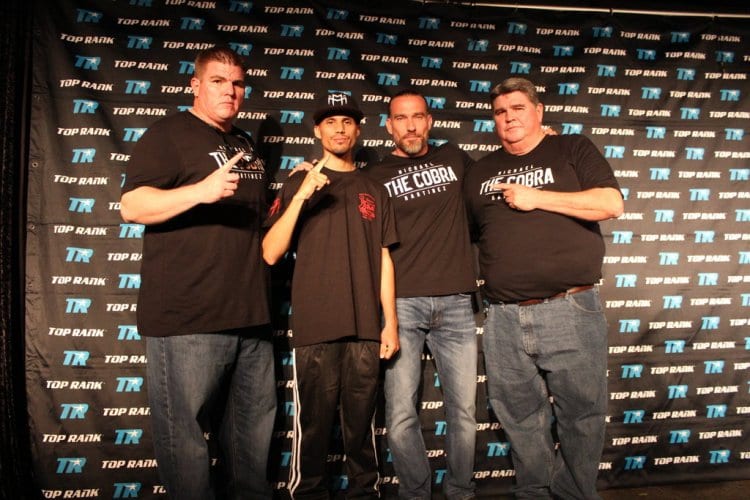 TUCSON, AZ (August 5, 2016) – Juan Baby Bull Diaz makes his highly anticipated return to the ring tomorrow night in Tucson, Arizona, at the Casino Del Sol. Diaz’ name will surely attract a lot of mainstream fans to the show, but the apparent star of the night was crowned at Friday evening’s weigh in. That future star is Mike “The Cobra” Martinez. I have had the pleasure of watching Mike work tremendously hard in the gym as he prepares for his professional debut. The task at hand will be against another local Tucsonan, Jesse Ruiz (1-3-2, 1 KO). Though it seems Jesse has the experience factor on his side, Mike is not deterred and is eager to put on an exciting performance in front of his family and friends, and other hometown supporters. When he stepped on the scale in front of the hometown crowd, he received the loudest and most supportive cheers of the night – even topping out the former world champion Juan Diaz. There did not seem to be any nerves as Mike appeared cool, calm, and collected. When that first bell rings, The Cobra will be ready to strike, and Tucson will birth yet another star. Newly crowned WBO Featherweight Champion, Oscar Valdez, represents the Tucson area, and will be in attendance to see another local fighter begin his rise to the top.

Doors open at 5 p.m. and the first bout is scheduled for 6 p.m. Tickets for this event have been sold out. The card will be televised on UniMas, with non-televised highlights being featured on our YouTube channel. Full coverage details will be provided exclusively by ITR Boxing.