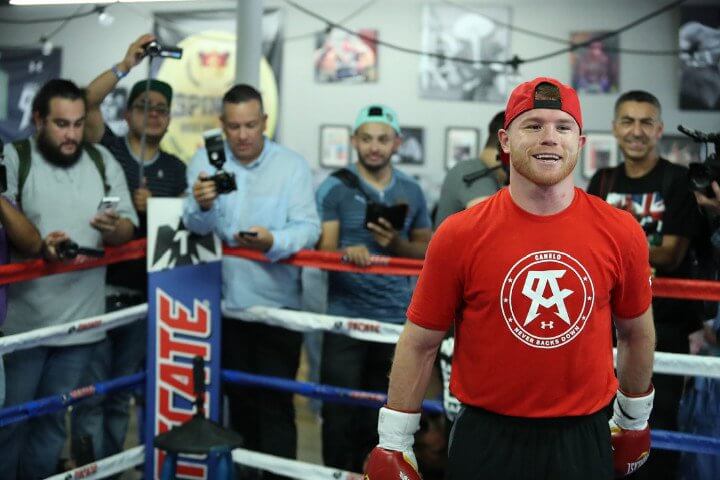 Arlington Texas. The fight will be televised live on HBO PPV with Gabe Rosado

and Willie Monroe Jr. serving as the co-future.

In today’s boxing current landscape, the biggest fight to be made in regards to fan

champion). Many fans are uninterested and are not giving this upcoming title

fight with Liam Smith a fair shake because of that fact. However, in my humble

and fair manner, we would be able to conclude that it’s a quality match-up in the

super welterweight division in regards to importance and entertainment value.

opposition on a consistent basis. From 2013 to 2015 Canelo has faced Austin

Miguel Cotton. (in that very order) That is a very impressive list of opponents to

say the least, especially in today’s era of boxing. Canelo did take in what many

deserved) in my opinion. However, Canelo ended up making a crucial PR mistake

belt and dropping back down to super welterweight. That move did not sit well

with many fans, and rightly so, but it’s a shame for fans to overlook this upcoming

legitimate one unlike the last one with Amir Khan.

Canelo stands at about 5’9 in height and possesses a 70 ½ inch reach. He has

sturdy. He also possesses above average punching power for the super

welterweight division. Canelo stylistically does well when his opponents either

come straight at him or stand right in front of him. He throws great combinations

and has good punch selection. Saul Alvarez is also very good at trading with

opponents, punching, slipping and countering from midrange. However, when an

fights out of the U.K. He comes from a boxing family with many of his siblings also

being professional boxers. He stands at about 5’10 in height and is in his physical

prime at 28 years of age. Stylistically I find him to be very similar to Canelo

him or stay in front of him and bang it out. However, I don’t consider him to be as

skilled as Alvarez specifically in slipping and countering punches while trading

with opponents. He also doesn’t have the same hand speed and crispness to his

punches like Alvarez does. Liam Smith does possess a good strong jab which

then Alvarez, which is something Alvarez isn’t used to.

and mental attributes of both fighters. Like most other fight fans around the

world, I can’t wait for Saul Alvarez to face and take on GGG in the future. But I

coming our way on September 17 th !